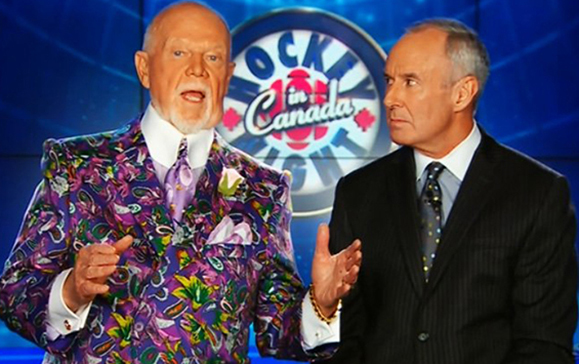 Sports and fashion are two explosive worlds that have increasingly embraced one another with each passing week. The blossoming romance is akin to the unbreakable bond between Brian and Stewie. They go hand in hand. It works for the players, it works for the brands, and most of the time it even works for the fans.

What true naturals like Joe Namath sparked simply by going with their instincts, has evolved into a giant publicity spectacle, which often leads to various endorsements from brands looking to move that all-important needle. And that’s when things inevitably snowball into an attention-forced abyss, like the time Dwayne Wade opted for some lovely capris or when Rich Kotitie chose to wear glasses that could’ve easily accommodated seven pairs of eyeballs. Poor guy was never the same. 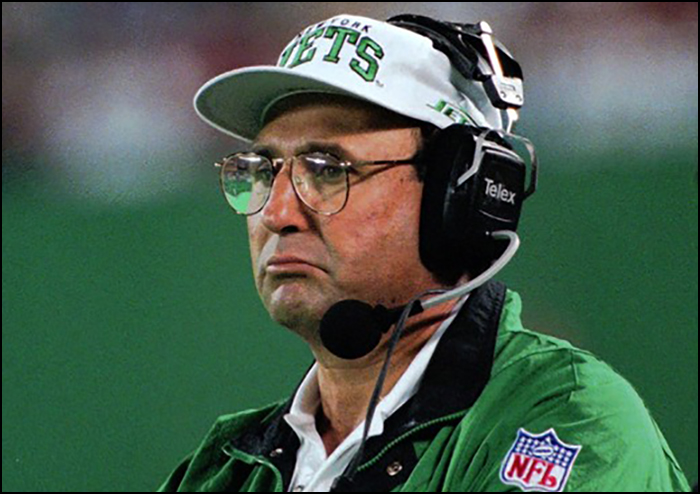 whose mans is this pic.twitter.com/ONoTms8vXT

So much going on here, but I can’t take my eyes off of Cam’s shoes because they look exactly like happy faces of some sort of reptile. But anyway, this is a good example of “did someone just throw a bunch of clothes on this guy, and he just went with it?” Also, the Pharrell hat had a nice, active run on social media, especially when it came to Arby’s bottom line. Reviving it feels a little unoriginal.

First off, we must keep in mind that this is Augusta. Secondly, we can’t confirm that this is a shot of Steph, in fact, at Augusta; especially since the tweet says “to reportedly play.” However, we can still critique his golf attire. It looks like he’s sporting an Under Armour hat, so he’s wisely sticking with the brand. And the outfit itself looks like something a fashionable PGA pro would wear (aka anyone under 35). So really, nothing wrong here. As usual, Steph Curry nails it.

Way too Space Jam for my taste. But keep in mind these sneakers were intended for Russell Westbrook’s feet. Not mine, not yours. And there’s not question in my mind that Russ LOVES these things.

Between the getup and the truck that screams Bills AND U.S.A, this would be somewhat ripe for mockery if it were anyone other than Rex Ryan. Or Hacksaw Jim Duggan.

OK, Clyde. This has gotta stop. This striped tie intersecting with the patterned shirt was a colossal mistake. And the pocket square looks like someone shoved some fancy origami in there while you weren’t looking. You’ve GOT to get it together. We need you shine in here, Walt. You know it’s gotten serious when he’s Walt instead of Clyde. But I have faith in you, my fine fashionable friend.

Very Presidential and expertly assembled, Jimbo. Your best week yet.

VIDEO: @Money23Green stopped by @footlocker to talk shoes and the second half of the season. https://t.co/kXEPsCCuBE pic.twitter.com/LgGKpBKkiV

Draymond Green is quickly knockin’ on the door of NBA fashion greatness. He’s got that old school, no nonsense feel, which fits his personality like a glove. Can we get this guy on the Knicks? He just screams New York. And yes, I realize the answer is not just “no” it’s “hahahahaha, uh, no.” Moving on…

How did Don Cherry not have a cameo in either version — 1971 or 2005 — of Charlie and the Chocolate Factory? He is not from this planet and I love him for it. With said, every time I see this guy I feel like I’m staring into one of those “magic eye” posters that Mr. Pitt could never quite figure out. 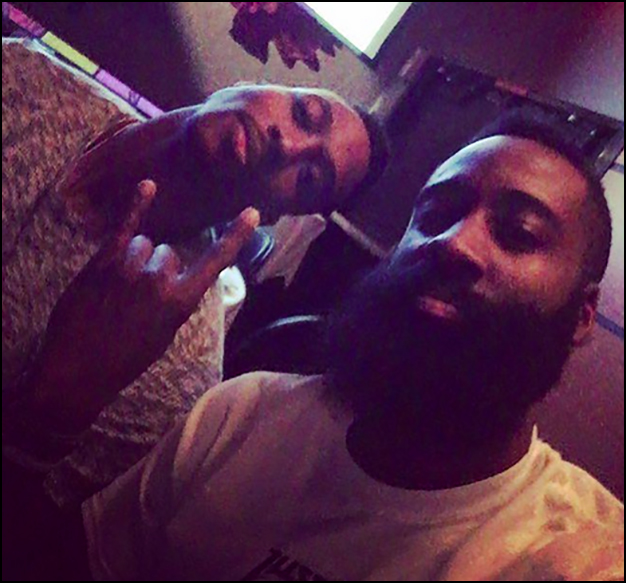 Thanks to Trevor Ariza’s Instagram comes this photo of Houston’s dynamic duo who can pose together for photos effortlessly, but cannot really play basketball together. It’s a shame it’s not the reverse. Anyhow, the laid back look from both of these dudes is kind of a surprise. Additionally, this photo had to be taken at 3 am or later. Because they definitely hate each other until it’s late night, where everyone loves one another. Allegedly.

Jeff Van Gundy explains his frustration with the All-Star Game this season. pic.twitter.com/RRMU7ENkDI

I went over this look from Russ in a previous installment, but you gotta love Jeff Van Gundy’s candor. I feel like it doesn’t get its fair due. And picturing JVG actually attending a Russell Westbrook fashion show is a visual delight. I can easily see him standing up and openly making critical comments on the outfits, as he simply does not understand proper fashion show etiquette.

These things look like an advanced pair of Nike Aqua Socks that were made for someone who has very bad feet, but would very much like to spend some time in the ocean. Which is to say, not good.

Clyde’s back! That was quick. He looks like he should be in South Beach, with his feet kicked up and smoking a cigar. At this point in yet another dreadful Knicks season, that’s probably what he’s yearning for. Can hardly blame the guy.

Even the casual version of Von Miller is pretty stylish, because that’s a fantastic Texas A&M t-shirt. Got a nice, faded look and of course it has pinstripes. After all, this is Von Miller.

Von’s fashion sense is aggressive as his game. But yeah, as the tweet notes, that jacket looks like it was lifted straight off the back of Don Cherry. I wouldn’t be surprised if it glowed in the dark or changed colors when touched.

The @Pacemates rocking out tonight in the throwbacks, too. pic.twitter.com/BOG5cEYqMl

The Pacers cheerleaders in Hickory High throwbacks? Brilliant. Here’s a free tip though: When the Pacers do this, they need to throw back the court too so everything is on the same page. Fans would go apeshit, in a good way. 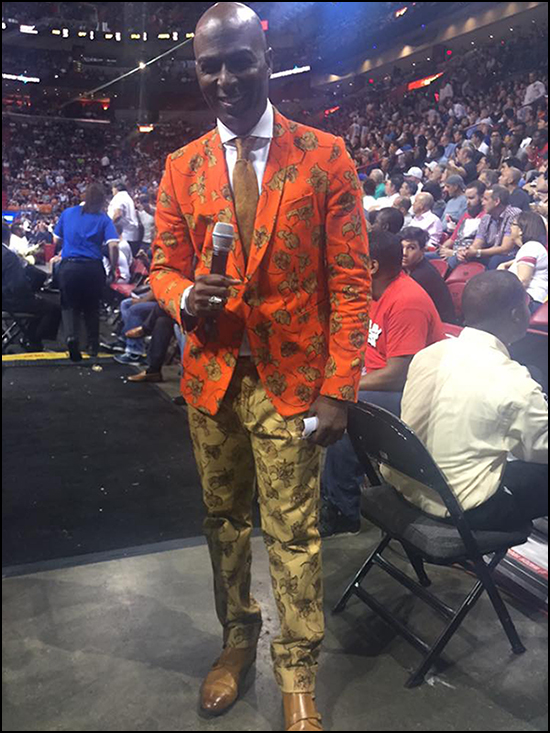 Dale McLean works for the Miami Heat and I’m pretty sure Dale just flipped this entire column upside down. Don Cherry, Clyde Frazier, Russ, ‘errbody — consider yourselves officially warned. This is an outrageous ensemble, with the stark difference being that it all comes together. As Jim Ross used to say on Monday Night RAW, business is about to pick up.

This is beautiful in the most unlikely of ways. Also, is Rob Ryan wearing pajamas? I pray to the high heavens that the answer is yes.

It goes without saying, but this was a very cool moment. Freakin’ adorable. Of more importance, however, is that P.J. Rose is 3 years of age and has style and a commanding presence. How is that even possible? Kid’s gonna do great things. That much I know for sure.

Maybe I missed it, but when did Steve Lyons become Diamond Dallas Page? pic.twitter.com/eIxSAGGOUJ

Well, this is just outrageous. Midlife crisis? Also working as a bouncer at a biker bar? Huge fan of Diamond Dallas Page? This is a mess. Then again, his nickname does happen to be “Psycho.” In case you may be wondering if it’s simply a mistake in the graphic, because I did at first, but nope, that’s definitely Steve Lyons.

If it weren’t for everything happening around him, you could easily convince me that Russ was in the midst of downhill skiing, sans poles.

The gloves kinda complete the circle here in convincing me that Kobe Bryant is the only man on the planet who could kick Liam Neeson’s ass in Taken. Dude looks calculated, dangerous, and loaded with skills, many of which we’re not even aware of yet. And, well, that’s actually pretty accurate. This is Mamba, man. Smoothest lookin’ dude in the NBA.

I have but one question: Does Kobe have a line of boxers, only for himself, that say “MAMBA” around the top? 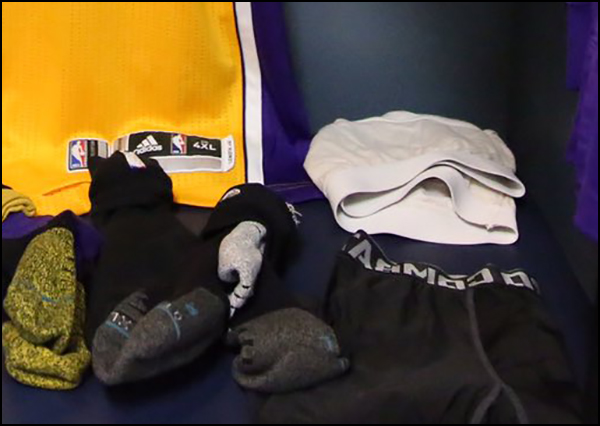 Upon further review, it’s not completely clear. But I wouldn’t be surprised. And with that, this concludes our creepy portion of this week’s installment.

Chad Johnson aka OchoCinco is retired and really just seems to flirt with countless admiring chicks on Twitter, smoke cigars, and dress like a man who strictly spends his money on fine clothing, watches and designer sneakers. Oh, and hang with Minions. I have a difficult time hating on any of this.

This is technically from early last week, but it must be included. My only disappointment here is that Don’s watch is far too normal looking. He either needs to wear a mini piano-shaped watch on his wrist or a gigantic neon clock around his neck. Then, and only then, will the mission be complete.

Any chance they accidentally buried Chris Berman in Justice Scalia's coffin? What? It happens. pic.twitter.com/RGnVE7IwmI

Chris Berman holding a wallet that only the likes of George Costanza would be willing to actually place into their back pocket is basically art imitating life, or vice versa. Housing a tie knot that’s been savagely kidnapped by flesh simply serves as the cherry on top. What a gift.