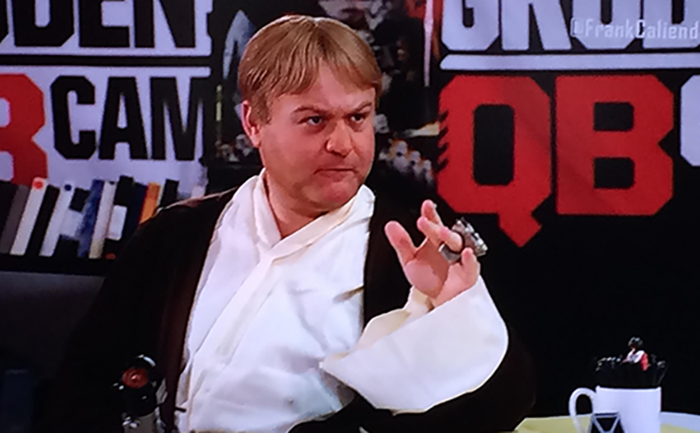 Sports and fashion are two worlds that currently embrace one another with the unbridled passion of Isaiah and Magic. They go hand in hand. It works for the player, it works for the brands, and it even works for the fans. What the great Clyde Frazier thought was just “lookin’ smooth” in the 70s has turned into one giant publicity spectacle. And that’s when things begin to have that troubling, attention-forced feeling, like wearing Christmas-themed suits, some of which house snowflakes, dinosaurs, and hand guns! 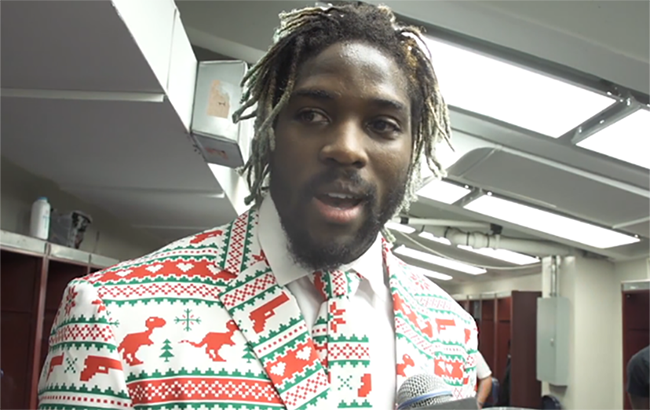 But then there’s the reliable, animated fans, who — while always clamoring for the camera — never bow to the whims of what’s wanted or needed from “big brands” and sponsors. What they do bring is a unique, expressive element of their own choosing, and one that usually coincides with just how bad or good their team is performing.

And that — coupled with athletes, announcers, and even fashionable mascots — is what this very space is all about.

DAVE GILLAN AND CHRIS BERMAN AT THE SHARK SHOOT OUT. MAN OF THE PEOPLE. pic.twitter.com/sGzNkZle05

Anyone who has ever played a round of gold understands the sweat factor. An easy way of defeating said sweat factor is to simply wear a dark shirt. Boom, problem solved; or at least mitigated. But not for Chris Berman, who has probably played more rounds of golf than most senators, yet still insists on wearing light purple polos at golf tournaments that all but encourage a mini sprinkler to erupt around his breasts. This is … this is not good a look.

Helpful Hint: A navy blue or black polo does all the necessary work here, and maybe some dark slacks, too. Also, feels like a hasty swing. Keep that head down, brother.

With every colossal fail, a masterpiece is usually close behind. And thank god for Kristaps Porzingis, his Chucks, and his veteran-like presence. If you knew nothing about sports, one might be inclined to assume this dude has been Eminem’s hype man from the very beginning. Alas, he’s just 20-years-old.

Helpful Hint: Never take up golf and park that Mercedes in a god damn garage.

When Gregg Popovich is mocking your hair, you know you’ve gone ahead and done something completed outdated and terribly misguided.

This sweater has Santa on a toilet… pic.twitter.com/c8tVY14onT

A sweater featuring Santa prominently sitting on the toilet? There are no words because I’m too busy clapping.

Helpful Hint: Not a damn thing. Minnesota wins this round. 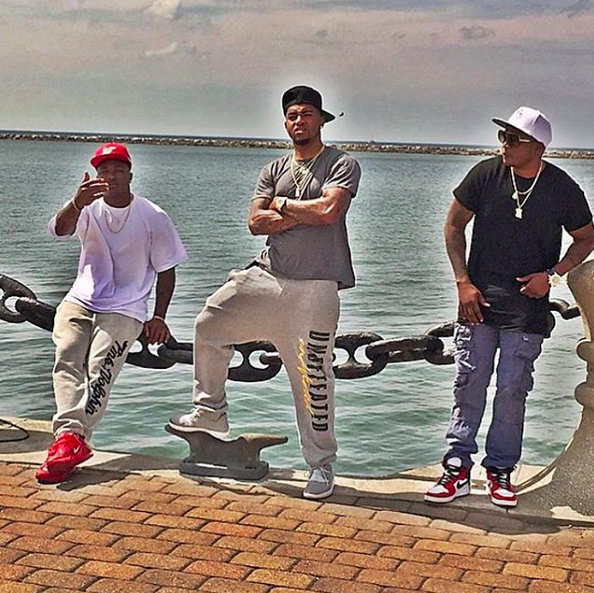 Helpful Hint: Next time, make sure those sick Jordans are on your feet. Terrible oversight. 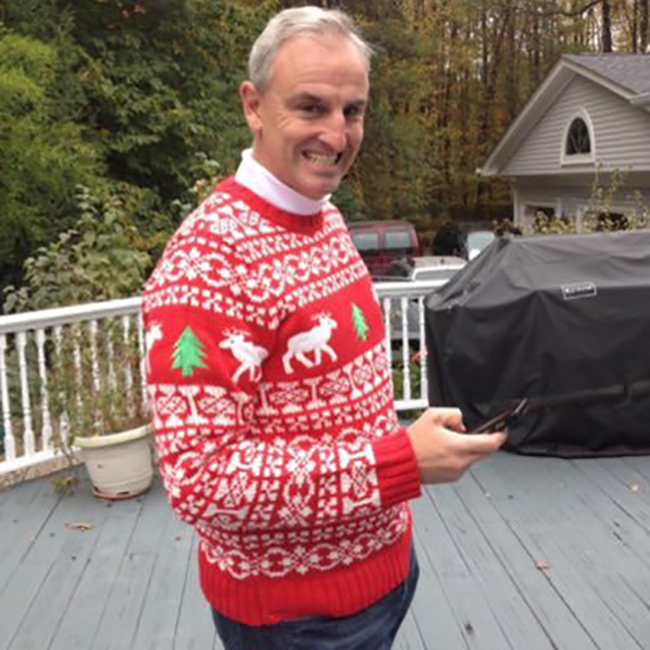 Helpful Hint: You can proudly wear that sweater through January and into February without anyone batting an eye.

Mark Cuban acts like a billionaire but dresses like a dad who simply threw on the two closest things to his bed that paired nicely with the weather.

Helpful Hint: If you’re gonna go the “FU I’m rich” outfit route, you could at least wear a vintage Mavs shirt rather than something straight off the sale rack at Old Navy.

Remember last week when I complained about Chris Berman’s diaper bag of a tie? I take it all back.

Helpful Hint: Button it up. And button it up now. 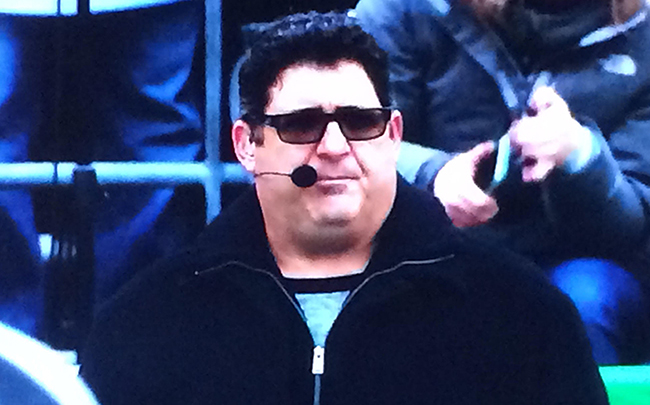 Tony Siragusa is frequently stationed in the end zone of NFL games to offer on-field perspective and analysis, though more often than not it comes off as any random Jets fan mubmling to themselves in the stands. On a scale of 1 to Tony Soprano, he looks to be an unhealthy 8.

Helpful Hint: Put all your chips to the center of the table and get a wild perm.

If you wear a suit and tie peppered with affable snowmen and an official team helmet, there’s just no way on Earth you deserve to witness a loss to the Lions at home. But I do applaud the devotion and perseverance to literally stand up to the tragedy. To be honest, the only thing I find offensive here is the giant Saints headband at far left. (Ed note: that’s a Saints Santa hat, but the top is floppy and looks like hair. Come on, Tim, you don’t have a 49ers one of these? Wait…)

Helpful Hint: Choose your company wisely. Don’t allow those around you to sink your style. 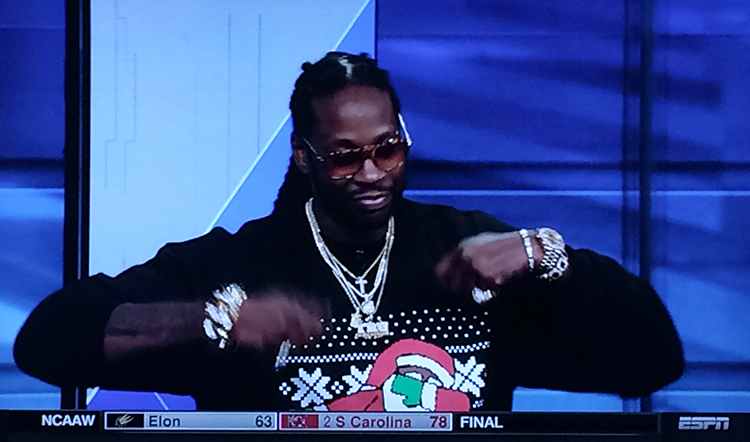 Just your standard appearance from 2 Chainz in a Santa Dabbin’ sweater on SportsCenter in Los Angeles. I thought the ugly Christmas sweater thing peeked last year after Kenny Albert wore a “Frosty the Carrot Penis” sweater during a FOX broadcast. I was wrong. Dead wrong. We’re just gettin’ warmed up.

Helpful Hint: For everyone working a game this festive weekend, take a hard look in the mirror and make sure Santa is not sitting on the toilet and that there are no carrot penises in sight.

Spuddy Buddy even thought to wear a Santa coat. And while it’s neglecting to cover his potato ass, the spirit is there and not one person seems to mind.

Helpful Hint: Continue to go through life dancing as if you are the mascot for a potato bowl and no one were watching.

I want some of that Cardinal ass tonight pic.twitter.com/wVbbnTsFHv

Yeah man, NFL fans are disturbingly hardcore and really, when it comes down to it, pretty damn weird. This is most certainly the look of a man who sought gameday attire advice from himself, and only himself. 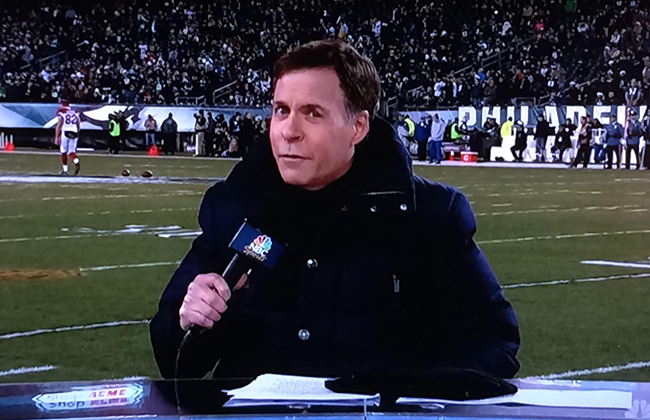 Kramer once warned Costanza to be careful of his giant Gore-Tex coat out of fear it might start a war. I would offer the same advice to Bob Costas and his puffy coat. Those obscenely inflated arms could put J.J. Watt on his ass.

Helpful Hint: Don’t change a thing, Bob. This is kind of fun.

This is really here to just stare at. The authentic Obi-Wan garments, complete with light saber in tow, are to die for.

Helpful Hint: Whoever styled Caliendo’s hair should be styling Gruden’s. What a masterpiece.

Cam Newton wearing some spiffy shoes on his way to the Giants game pic.twitter.com/138jADuWPh

I love this look because it bothers the hell out of every middle-aged sportswriter who wouldn’t dare stray from the norm.

Helpful Hint: This Sunday? Rollerblades with gigantic spinning lollipops on the sides. 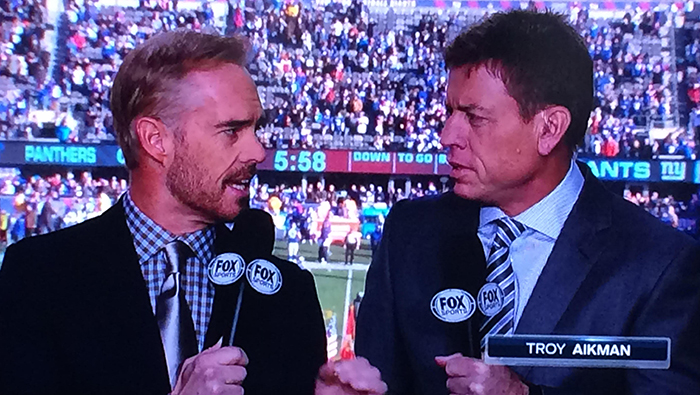 Joe Buck going with the Regis Philbin “Who Wants To Be A Millionaire” shiny silver tie from 2001. Timely stuff.

Helpful Hint: Do better at taking cues from Troy’s concerned facial expressions. He’s there to help.

It was apparently a huge week for shoe statements, as these cleats by OBJ not only contained Christmas gifts sewn on top, but they lit up too!

Helpful Hint: If you’re going to strut onto the field dressed like a signature character from a video game, you must catch wide open touchdown passes. There’s absolutely no in-between. 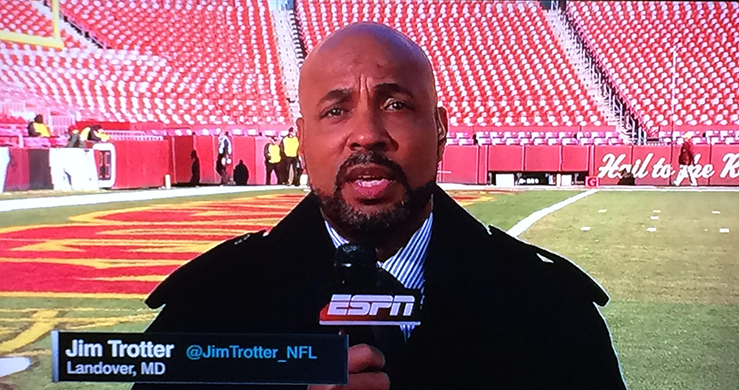 Come on, Jimmy. It was nearly 50 degrees in D.C. on Sunday when you delivered this dispatch for ESPN.

Helpful Hint: Ditch the dramatic overcoat, throw on a scarf, and set your soul free. 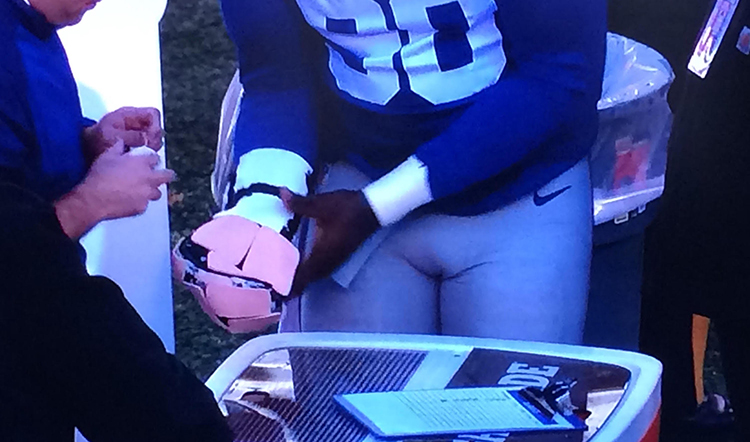 I don’t even think the Giants know what they’re doing with this thing each week. Get the sneaky feeling they’re just winging it. You know, kinda taking it moment to moment, because the contraption we have here looks like JPP’s been tasked with mass-producing ham sandwiches for the team. 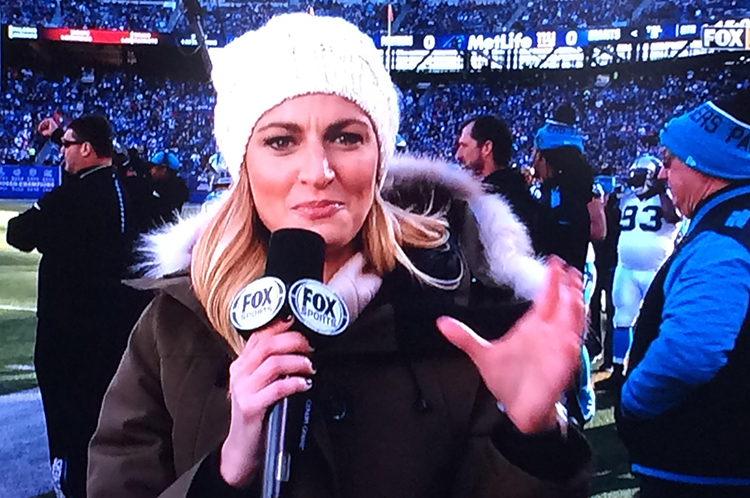 For every Tony Siragusa, there’s an Erin Andrews who completely captures the holiday spirit without overdoing it.

Helpful Hint: Gonna need to see some antlers on that hat this Sunday. Sorry, it’s Santa’s weekend and we do as Santa does.

Sports Fashion Quote Of The Week

“One person I really want to dress is Michael Jordan. Just to sort him out.” — Adrien Sauvage, Designer 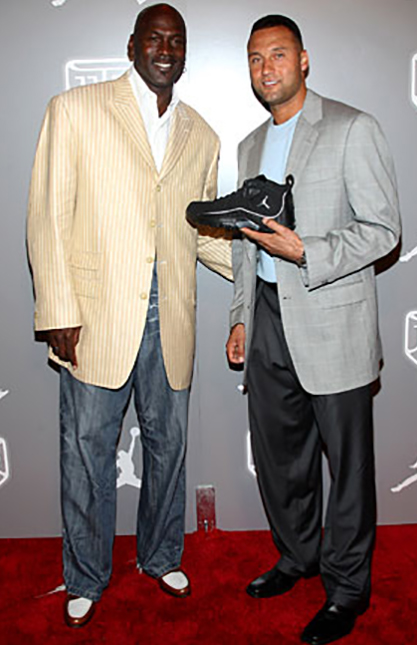 We feel you on this one, Adrien. We totally feel you.

Chris Berman says it’s time to cut the crap. So we will. At least for this week. However, we do encourage him to continue channeling a bizarre version of Popeye. It’s as disarming as it is beautiful.