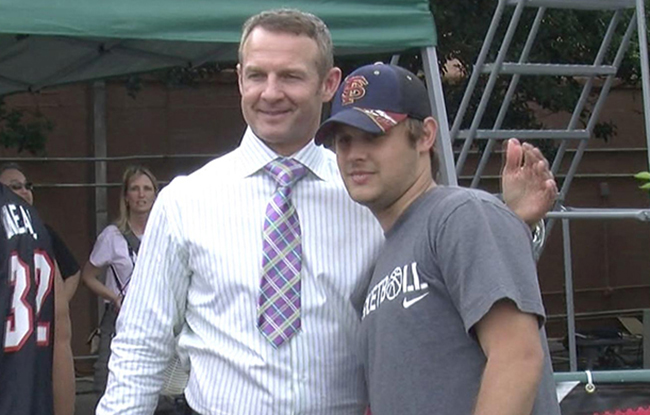 Sports and fashion are two worlds that currently embrace one another with the unbridled passion of Isaiah and Magic. They go hand in hand. It works for the player, it works for the brands, and it even works for the fans.

What the great Clyde Frazier once thought was simply “lookin’ smooth” has turned into a giant publicity spectacle, which often leads to various endorsements from brands looking to make that big splash. And that’s when things begin to snowball into an attention-forced feel, like wearing a jacket made entirely of a 1980s shorts or Paul George’s torso consumed by a sea of diseased Amoebas. 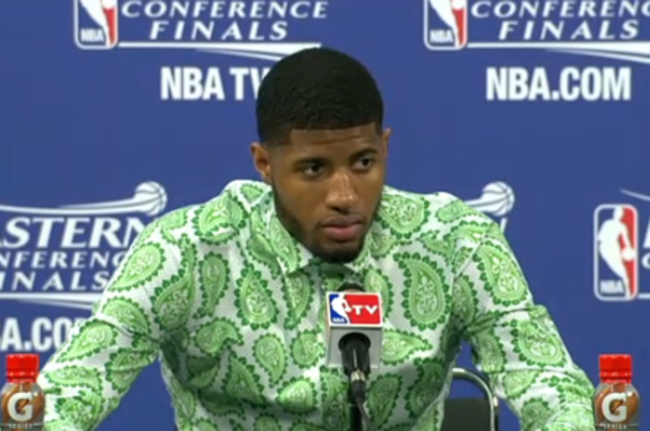 But then there’s the reliable fans, who — while always clamoring for the camera — never bow to the whims of what’s wanted or expected from highbrow fashionistas. What they do bring is a unique, expressive element of their own choosing, and one that usually coincides with just how bad or good their team is performing.

Just when Kobe thought he had seen it all … pic.twitter.com/MScjZgXCmY

Kobe Bryant obviously said something that sounded pretty funny to Jeremy Lin during Tuesday’s night game in Charlotte, but he clearly wasn’t kidding around. What the hell is up with this? Kobe looks like he’s studying the world’s worst art exhibit and can’t wait to tell the sculptor to change careers.

Helpful Hint: He’s not laughing with you, Jeremy. He’s laughing at you. 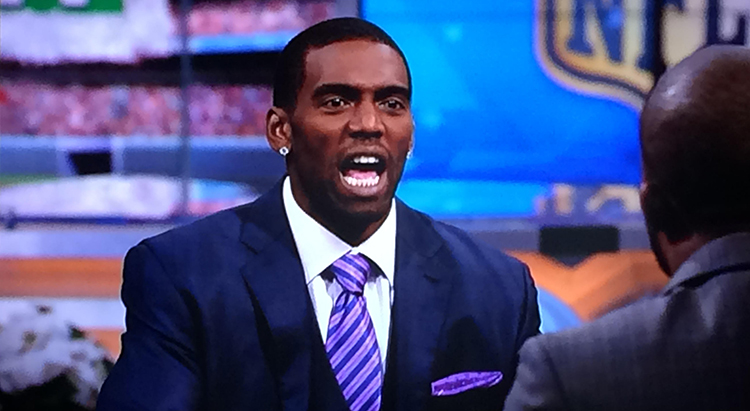 Randy paying a subtle tribute to his Vikings with a stylish tie that is amazingly not coupled with a polka-dotted jacket. What a concept!

Helpful Hint: To everyone in sports broadcasting, pay attention and LEARN from what Randy did here.

You know what? We’d be complaining if this duo instead wore stiff overcoats and suits like they were headed to a fierce sitdown with Randolph and Mortimer, so perhaps we’ll just let this one be. And neither jacket is slapped with a giant NBC logo that ruins the clean look, which is downright stunning in this day and age. My only concern is for Al Michaels, whose neck has heartlessly betrayed him and he damn well knows it. 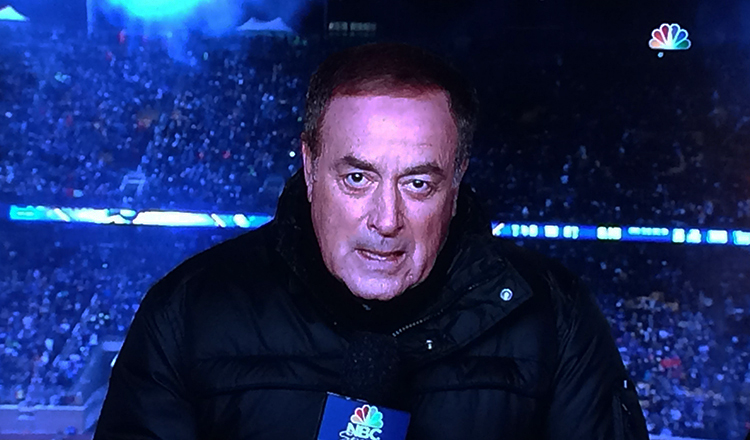 Helpful Hint: Please equip Cris Collinsworth with some skis and poles. The dude is all bet begging to fly down a black diamond at any given moment.

Ray Lewis ditching the regularly seen Dick Tracy look in favor of the cozier Elmer Fudd approach is sadly a major improvement. [Note: This Vine has probably played 65 times since it was placed here and I have not once turned on the volume.]

Helpful Hint: Do Sunday and Monday Night Football in Minnesota or Green Bay every week. 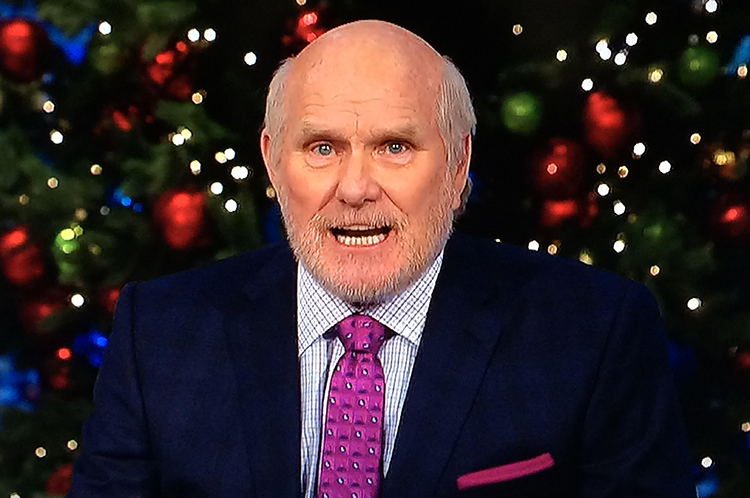 Did You Know? Terry Bradshaw once stood in for the GEICO Caveman and Hulk Hogan in the same day. Also, the tie he’s wearing here was reportedly bedazzled with pomegranate seeds. There’s not much to make sense of here. That shirt and tie were never meant to be friends.

Helpful Hint: Following the rule of keeping it simple, or simpler, definitely applies in this case.

While your initial guess might be that this man drove to stadium on Christmas Eve and then put on his new Star Wars mask for the big game, I can almost guarantee he not only wore it during the drive, he wore it all damn day. 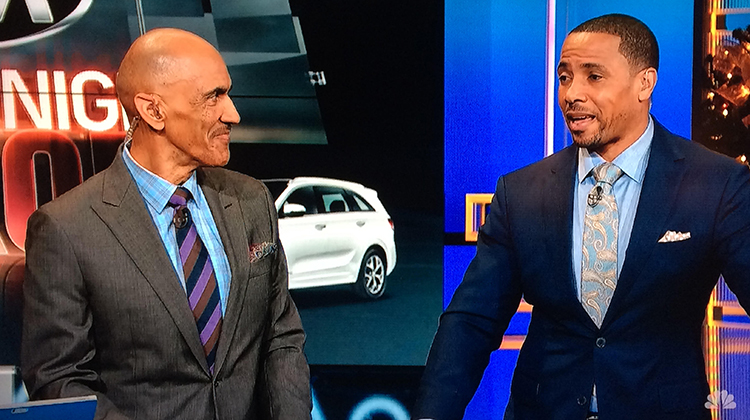 There’s really nothing wrong with what either guy is doing here. In fact, the paisley tie on Harrison is pretty badass. But these are two guys who spend the majority of their time on screen together, you know, like what we’re seeing here. Way too much going on, boys. You don’t have to wear matching outfits like the Hart Foundation — although that would be hilarious — but there’s always a happy in-between.

Helpful Hint: Throw in a giant pack of Skittles to complete the busyness of this photo.

He brought a bat

The perplexed expression on the face of the woman in the background says it all.

Paul George’s kicks look like they made love to a plastic pasta strainer.

Helpful Hint: Replace that netting with leather and it’s a whole new world.

An A-Rod sighting! The only thing missing from this photo is Paulie Walnuts in a matching jumpsuit.

Helpful Hint: The rule of thumb with A-Rod is no matter what he chooses to do, that he never, ever change. 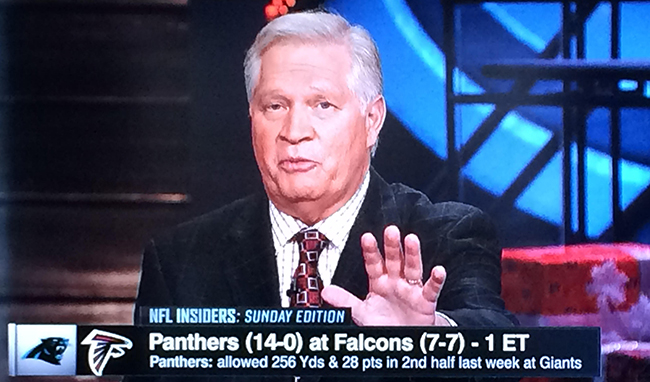 It’s almost as if Mort wants to offer up an explanation before I say that his tie, which looks like a blinged out turtle shell, should be illegal in all 50 states.

Helpful Hint: Flash that stop signal each time you reach for a tie and give yourself a healthy minute or two to think things through.

Looks like the Wazzu Football team is having fun in El Paso. #GoCougs #OffensiveLine pic.twitter.com/4MBzGQG76Y

It’s bowl game week, so it would be remiss of me not to include some of the “action” spotted by fans in the various hosting cities. Washington State is having an absolute blast in El Paso.

@TheSportsHernia cuz you always wondered what became of MJD…. pic.twitter.com/KxNyRdUsA1

Helpful Hint: Do laps around the couch during commercial breaks.

While I do like the creativity here, all this photo does in the end is confirm that this Redskins fan owns a pair leather Redskins sneakers. 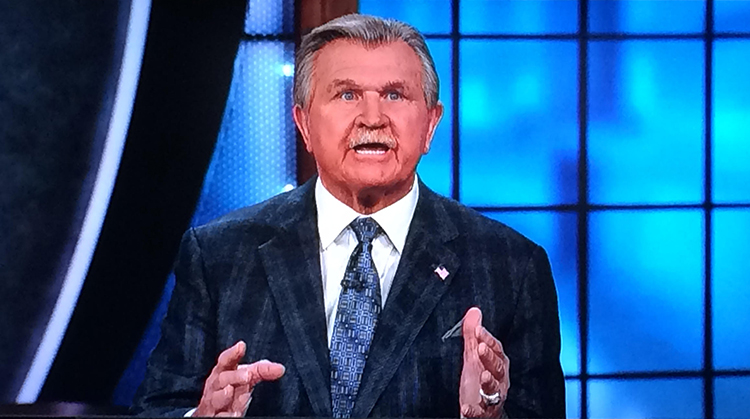 Ditka has made a strong departure from the Jedi look in favor of what appears to be a sugar-glazed blazer. Baby steps, man. Baby steps.

Helpful Hint: Sunglasses and a Bears sweater for Week 17. Come on, every NFL fan would eat that up.

There it was! First caller to say Tomlin should've gone to Landry Jones! @KDPomp pic.twitter.com/VpGd92NyUG

A combination of crazy Steeler fans literally calling for Landry Jones to save the day, compounded by a suit with dueling patterns results in this outstanding reaction. 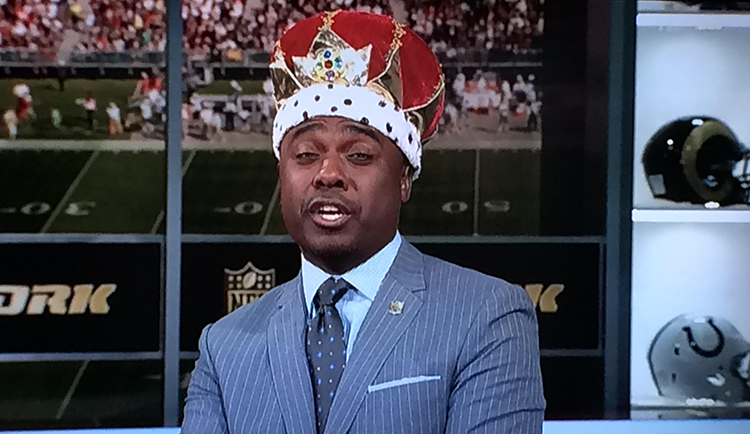 If you plan on going this route, you must go full Costanza. That is a sharp suit, though. 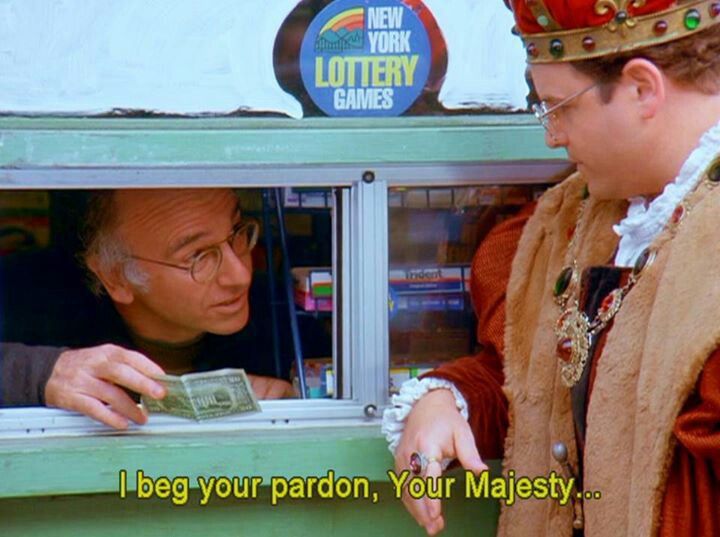 Helpful Hint: If you didn’t already know Larry David played the news stand guy in this episode, we can’t be friends. 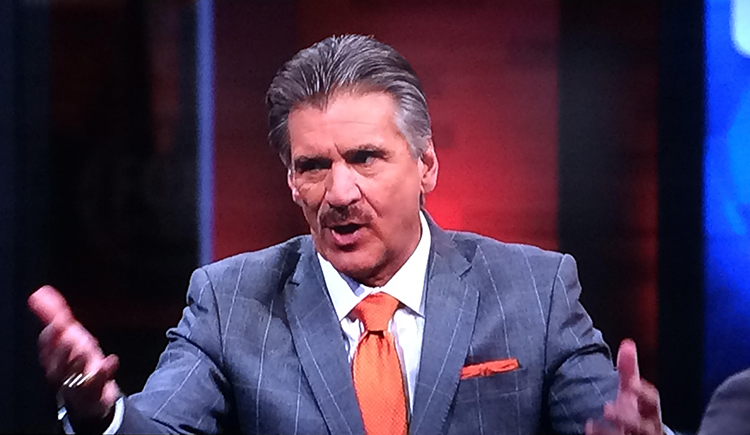 If Dave Wannstedt ever wears a full black suit and a gold tie, he will be the greatest pit boss ever to set foot in FOX studios.

Helpful Hint: Stick with the light colors. It greatly assists in balancing out your ferocity. 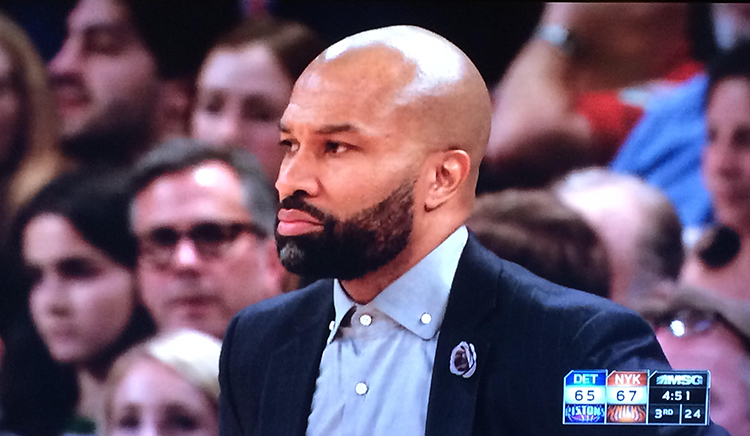 Dude, if you’re gonna button it all the way to the top and not wear a tie, said buttons must be the same color of the shirt. Terrible look. But Old Navy mus be beaming with pride right now.

Helpful Hint: Undo one button, use a Sharpie to color the buttons so they match the shirt, or a hire someone to buy you ties.

It was cold, it was rainy, and you stayed until the end.

Thank you Bills fans! Best in the League. #RockTheRalph pic.twitter.com/c4oYbQZvr6

Bills fans and Raiders fans should do lunch. It’s too bad they’re so far apart. They could trade wonderful ideas and punches.

Helpful Hint: Forget anything helpful. Is that a homemade championship belt I’m seeing under all those accessories? My god, these people are incredible. 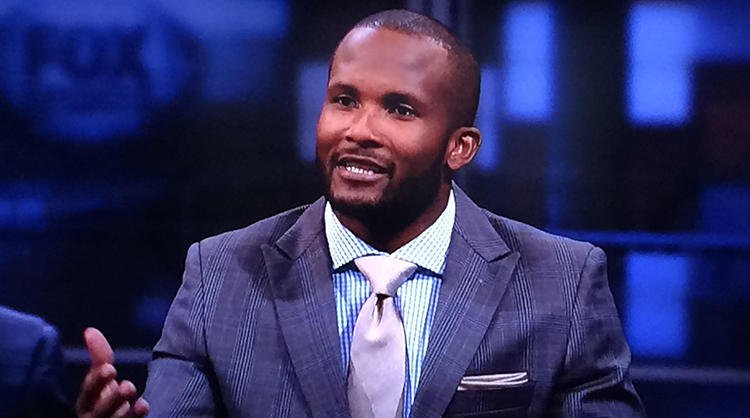 Champ’s explosive tie knot here is wider than the very end of most ties. The downside of doing such a thing? When he takes off his jacket, the tie will end just below his breasts. Not a great look, as evidenced in the past by fashion icon, Merril Hoge. 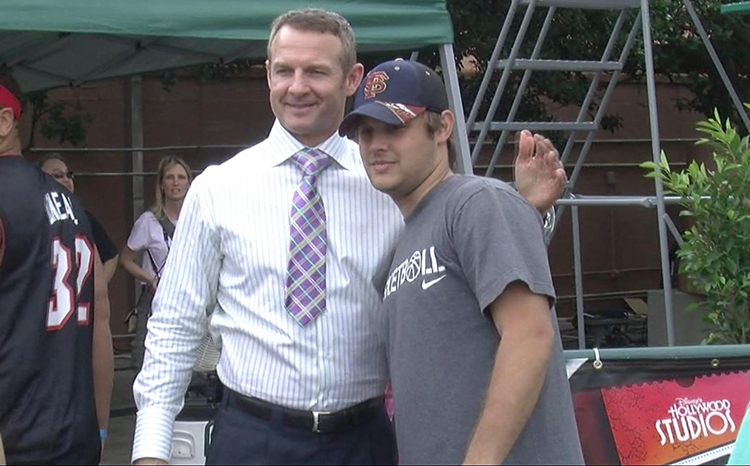 Helpful Hint: I don’t care if you’re asked to throw the football or play DB on set as part of a segment, never take that jacket off. 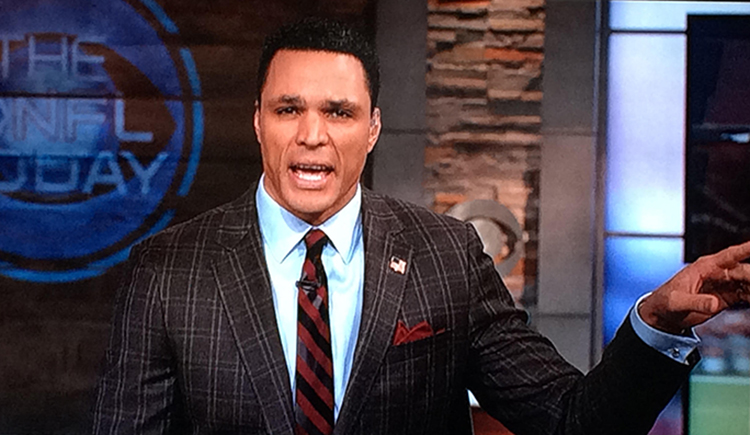 Would it kill these guys wearing patterned jackets to sport a tie that doesn’t conflict with it? This is like two receivers colliding with one another, resulting in a pick-6 that was in no way the quarterback’s fault.

Helpful Hint: All you had to do was wear a tie that looked like your pocket square, in the sense that it housed one color.

Sure, this was shown on TV countless times throughout the day on Christmas, but it’s worth acknowledging the holiday spirit. Again, this is about mostly terrible fashion. What we have here is simply a man showing his unique ability to quickly switch gears from ALL fun to ALL business. 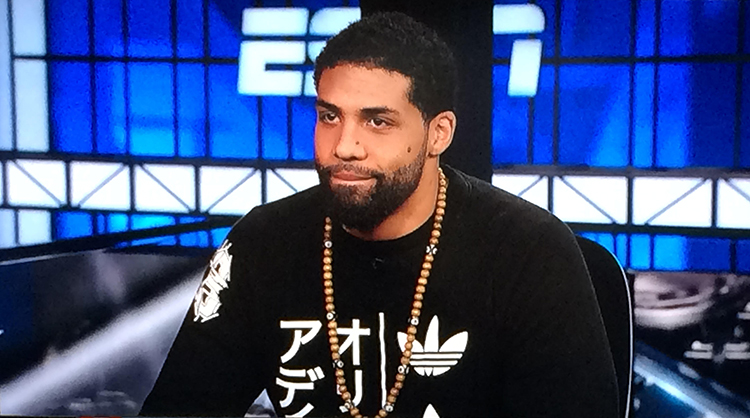 Arian Foster was on NFL Countdown this past Sunday and did an amazing job. He was candid, but measured in his delivery, making for an easy, insightful listen. He also bucked the norm and ditched the suit idea altogether. Gotta love a guy who walks to the beat of his own drum.

Helpful Hint: Stick with this. It’s gotta be more fun than playing for the Texans.

Good lord, Mark Jackson looks like the host of the worst game show host on the planet. Is he good buddies with The Count? Has to be.

Helpful Hint: Send that suit directly through a wood chipper.

This is the greatest family photoshoot I’ve ever seen, and that includes the Jackson 5. Dwayne Wade has official taken the throne as the funnest dude in the NBA.

Helpful Hint: Keep doing stuff like this. Preferably once a week.

The game has changed. pic.twitter.com/4ADIUChH2k

The shorts are more startling than the eye-popping numbers. And that’s saying A LOT considering we’re looking at Bird’s career number of 3-pointers made versus Steph Curry’s since 2013. 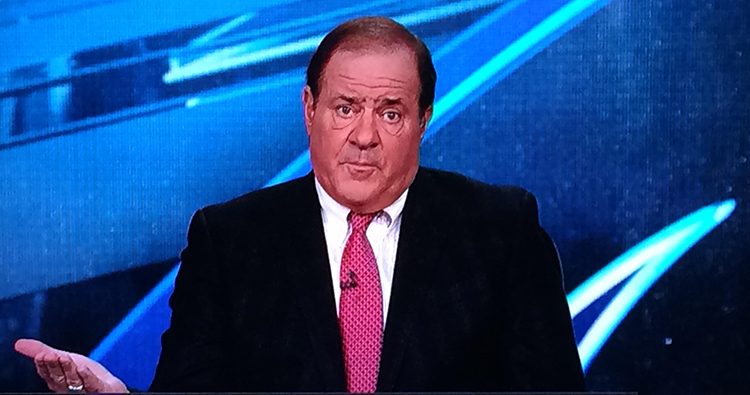 Once again, as it seems to be turning into a tradition, Chris Berman appears to be asking if we would please cut the crap. So we will. At least for this week. However, we do encourage him to get some sleep. Some good, quality sleep.

Previous installments of this weekly feature can be found right here.