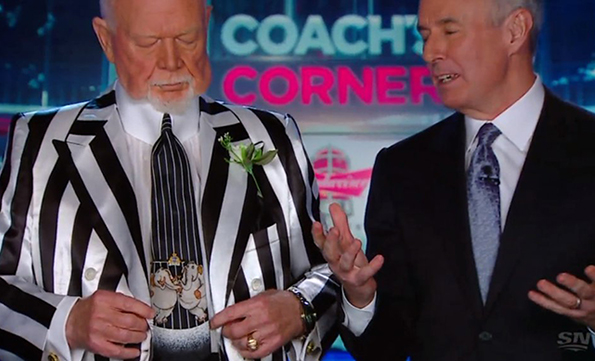 Sports and fashion are two worlds that currently embrace one another with the unwavering passion of The Phoenix Gorilla and his custom motorcycle. They go hand in hand. It works for the player, it works for the brands, and it even works for the fans.

What true naturals like Clyde Frazier once thought was simply “lookin’ smooth” has turned into a giant publicity spectacle, which often leads to various endorsements from brands looking to move that all-important needle. And that’s when things inevitably snowball into an attention-forced abysss, like Danny Kanell impersonating a tragically unconvincing version of a Bond villain or Joakim Noah channeling a band member who’s just been arrested for the third time in a week. 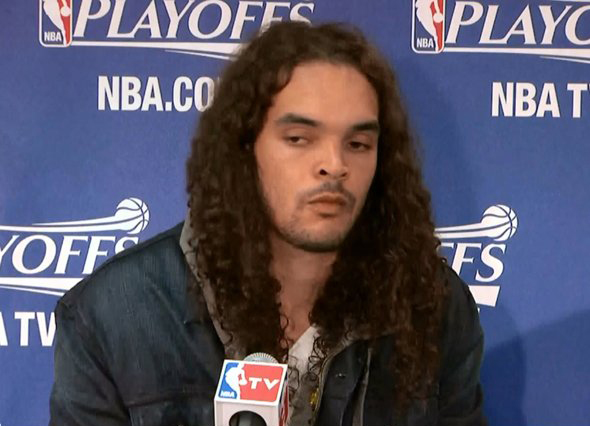 But then there’s all of those reliable fans, who — while always clamoring for the camera — never bow to the whims of what’s wanted or expected from highbrow fashionistas. What they do bring is a unique, expressive element of their own choosing, and one that usually coincides with just how bad or good their team is performing.

And that — coupled with athletes, media personalities, and even spirited mascots — is what this very space is here to embrace. This is week is very NFL heavy, for obvious reasons. It was Wildcard Weekend! Oh, and Roger Goodell helped rip some hearts out again.

In NBA style, there's @russwest44 and then there's everyone else. He's Basketball Lagerfeld. pic.twitter.com/gP0Y38HoS0

Something tells me Russell Westbrook will be a fixture in any kind of sports fashion conversation until the end of time. You know what his key is? Range. The dude has a ton of range. Also a key? Not taking one single second to ever consider what one other person might think of his outfit choices. He looks like he’s about to host an invite-only Jazzercise class in Brooklyn. But nope. It was just another Friday night for Russ.

Helpful Hint: Next time you wear something like this, do springy jumping jacks as you make you way into the arena.

Jimmy Butler’s kicks with an outstanding shoutout to Marquette, his alma mater. That Golden Eagle is so wonderfully pissed off. Would love to know who he’s staring down. Probably a mascot.

Clyde Frazier with a jacket, shirt, and tie that should definitely make this their last get-together.

Helpful Hint: I take it all back. How can anyone say anything even remotely critical of Clyde? Look how happy this dude is. It’s infectious.

Bob Costas without a hat. Sorry @dpshow. This should clinch the Sports Emmy for Bob. @PaulPabst #SEAvsMIN pic.twitter.com/VSuCDtofBz

Bob Costas of all people didn’t wear a hat when the temperature in Minny was well below zero. What a brave badass who … oh, wait. NOW we remember why. 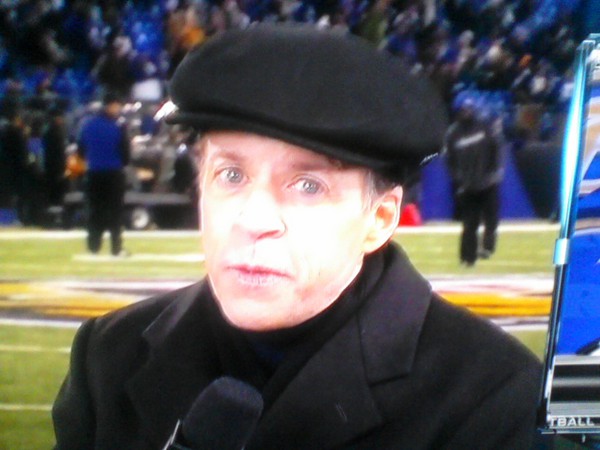 Helpful Hint: Yeah, keep not wearing hats. Thanks in advance.

Very few people in the world can rock an elephant tie and a Beetlejuice suit.

Don Cherry is one of those people. pic.twitter.com/qzlWodpFeL

I’m not even sure if Don Cherry is a real person at this point. How did this guy not play a key role in Elf? That blinding white collar all but screams “mythical North Pole figure.”

Sadly, this spiffy suit being worn by Cleveland Browns new head coach Hue Jackson is the greatest thing to happen to this franchise in over 20 years.

Helpful Hint: Is it too late to change your mind? Even Browns fans already feel for this dude.

Fun Fact: That wheel of a watch costs more than all the money you’ve spent in your entire life. Twice.

Helpful Hint: Please fight Creed in Creed 2. And lose badly. It’s really our only option at this point to enjoy a Floyd Mayweather loss.

This Ram Wearing A Rams Jersey

These poor rams dressed in Rams jerseys had nothing to do with this soulless move to L.A. and I’m quite sure they’re completely content wearing their own natural coats that God gave them.

It should come as absolutely no surprise that Tom Coughlin opts for thr Presidential look and pulls it off quite well. It’s also a safe bet that the former Giants coach thinks Russell Westbrook is a complete oddball with no respect for standard business attire.

Congrats to Chris Berman on his upcoming induction into the @NSSASportsMedia Hall of Fame. https://t.co/ahWjPWzITz pic.twitter.com/HCcbZb0Cim

Chris Berman’s addiction to Krusty the Clown’s special line of outlandish ties has frankly gotten out of control.

Helpful Hint: When it comes to Chris Berman, we’ve reached the point where helpful hints are rather pointless. 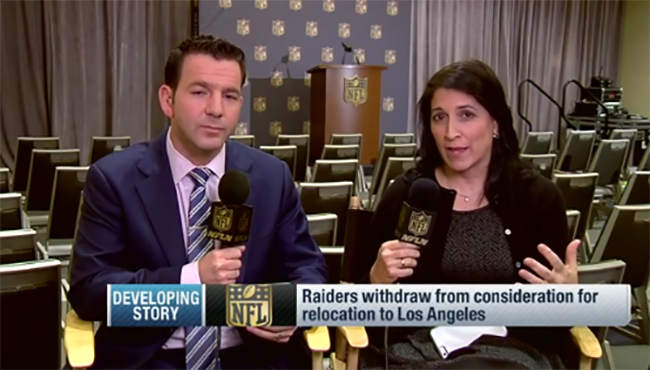 Strange But True: Ian Rappaport’s tie is actually affixed to his right shoe. It’s basically the opposite approach of Merril Hoge and his signature “I stole my tie from a doll” look. Ballsy statements, to say the least. 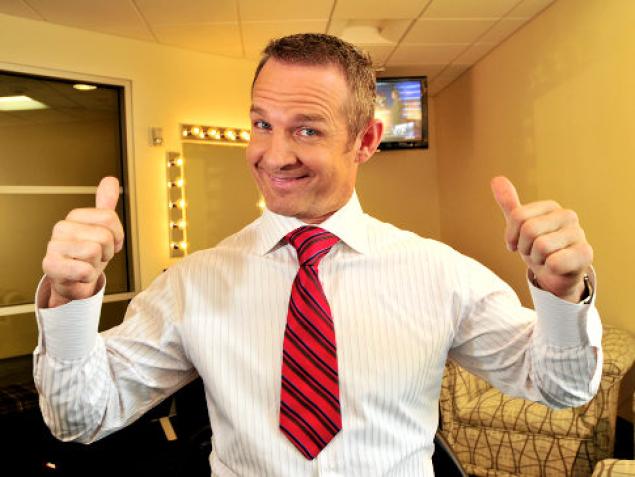 Having a sense of humor about things that really suck is a great way of shifting the conversation in how much something sucks. Good on you, Jon Ryan.

Antonio Brown and Russell Westbrook need to open a boutique clothing store in a secret spot that only those who have earned the right to walk through the door know of its location. Don Cherry and Clyde Frazier could serve as Chief Fashion Advisers. 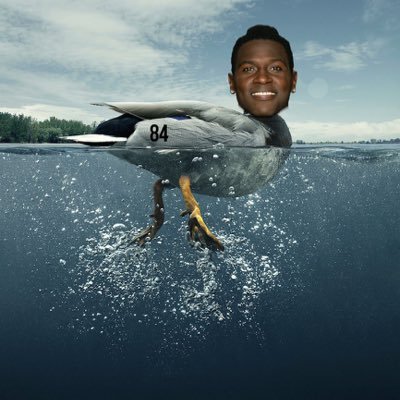 "Ted Ginn has really matured. I wouldn't drop my baby out of a burning building to him, but I really do like him" pic.twitter.com/KHCY1qxwBj

It’s hard to mock Deion after reading the above quote about Ted Ginn. Beautiful.

Helpful Hint: Keep saying things like this. Candor in this business is crucial.

"We didn't lose faith when we were down & out. Most people would've gave up, but we've got a team full of fighters" pic.twitter.com/Fxx8rsP9M1

Helpful Hint: I’m telling you, this dude is constantly telling himself jokes internally. It’s so difficult to hate.

Understood. Mike Zimmer, who I have great concern for, has not felt his face for WEEKS.

Had Mike Zimmer and the Vikings advanced, we would have witnessed his skin crack and peel off his face. I don’t care what city the game would’ve been played in.

Helpful Hint: Stay indoors until Week 1 of next season.

There will be no #Clowney around today @HoustonTexans vs @Chiefs matchup @nflnetwork pic.twitter.com/FvHvneDGsv

Show up to a sporting dressed like this and you can fully expect your team to get waxed, 30-0.

Helpful Hint: Allow Bill O’Brien to borrow that clown nose and wig. It would suit him quite well at the moment.

NFL Network’s Best Dressed of 2015? None other than Tyrod Taylor. 🔥 Watch their top 10: https://t.co/hyVR2e1Aed pic.twitter.com/kZEBlg8oDe

Helpful Hint: Offering any kind of advice to Tyrod Taylor’s choice of attire would be like advising Steph Curry on his jumper.

Eat your heart out, Bob Costas. Because this hat is tremendous. What a lost opportunity.

Helpful Hint: Get the hell out of Minnesota.

LIVE on @NFLTotalAccess: "I think this is going to be one of the great complexes in the world." pic.twitter.com/ncK7iML9nt

What a smug horse’s ass.

Helpful Hint: You make MILLIONS a year for a league you run that rakes in BILLIONS. Yet your tie knot is crooked and your neck appears as though it might explode. You and your tailor gotta get it together, man.

Another Ram In A Rams Jersey!

When they said the Rams were moving to LA, I didn't realize they meant that literally. pic.twitter.com/amRnFP70et

Another ram in a Rams jersey. For the love of all that is holy, please leave actual rams alone. Check out the leg holding the affable animal in place. He clearly wants OUT. Immediately.

LIVE on @NFLTotalAccess: "This has been the most difficult process of my professional career" pic.twitter.com/W1KVTytBl8

This is all your fault, Stan. Now shave that awful mustache and use the trimmings as a condiment on your next cheeseburger.

Helpful Hint: Probably best to stay out of St. Louis for awhile. Just trying to help.

@WhatHeLooksLike Chris Berman looks like a wax statue of Benjamim Franklin left in the car in the middle of summer pic.twitter.com/KF1dUskl2A

As you’ll notice from the time stamp, this is a recent tweet. But given the MLB All-Star game logo in the background, it’s not a recent photo. However, saying that Chris Berman “looks like a wax statue of Benjamin Franklin left in the car in the middle of summer” was far too fun to pass up.