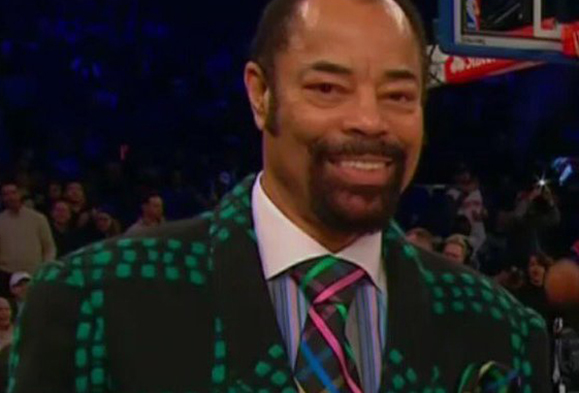 Sports and fashion are two explosive worlds that have increasingly embraced one another with each passing week. The blossoming romance is akin to the unbreakable bond between Jordan and Pippen. They go hand in hand. It works for the player, it works for the brands, and most of the time it even works for the fans.

What true naturals like Joe Namath thought was simply “lookin’ smooth” has turned into a giant publicity spectacle, which often leads to various endorsements from brands looking to move that all-important needle. And that’s when things inevitably snowball into an attention-forced abyss, like Von Miller’s furriest choices in headgear, or Dwyane Wade wearing a self-branded eye-stickie.

Remember this one? Oh, how quickly we forget such utter ridiculousness. 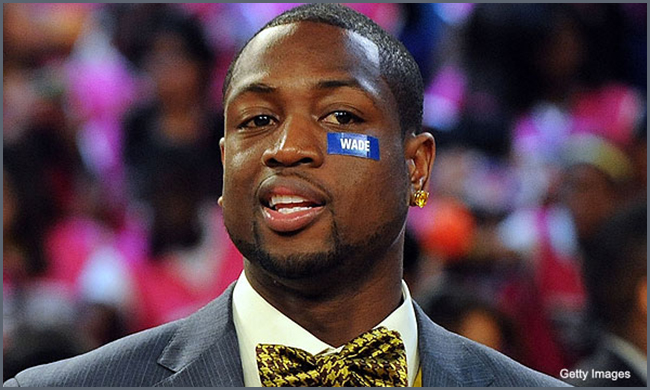 And that — coupled with athletes, media personalities, and even spirited mascots — is what this very space is here to embrace. This week’s edition serves as a fond farewell to football. 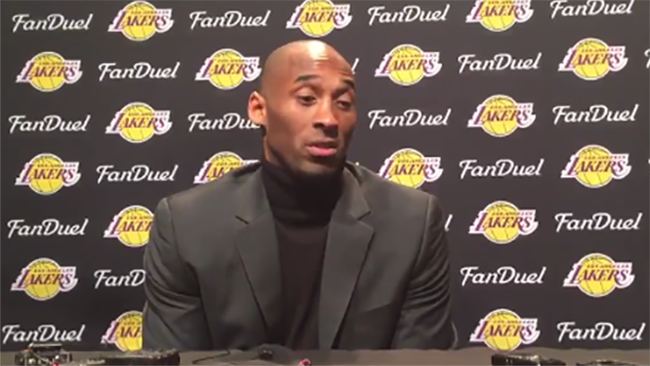 This may be the only time I’ll ever say this about the black turtleneck/black jacket combo, but I believe Kobe Bryant has earned the right to dress up as a Jedi.

Helpful Hint: If we see this trend spread to the likes of, well, anyone in broadcasting the comment above will be harshly RESCINDED.

Ditching that beautiful, signature red Papa John polo for a Broncos shirt says everything you need to know about this sacred friendship. Because I’m pretty sure I’ve never seen Papa John in anything but a Papa John’s red button down.

Helpful Hint: Jumping up to first in the kissing line was just wrong. Having said that, I’d love to see Papa John Schnatter working his magic around midnight during a wild wedding reception. 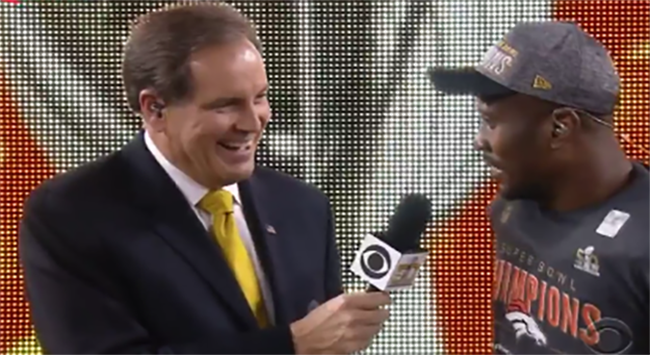 There’s no doubt in my mind Jim Nantz was trolling the Broncos in this Steelers shout-out of a suit which, frankly, I found to be pretty immature. Whatever it was, he’s basically channeling a game show host here. An exceedingly happy, possibly unnerving game show host. (Ed note: Tim, it was a gold tie for the Super Bowl’s 50th anniversary, and it was…golden.)

Helpful Hint: Actually, nothing to add here, other than a sincere thank you for FINALLY killing “the Dab.” Someone had do it. And it’s definitely dead now. 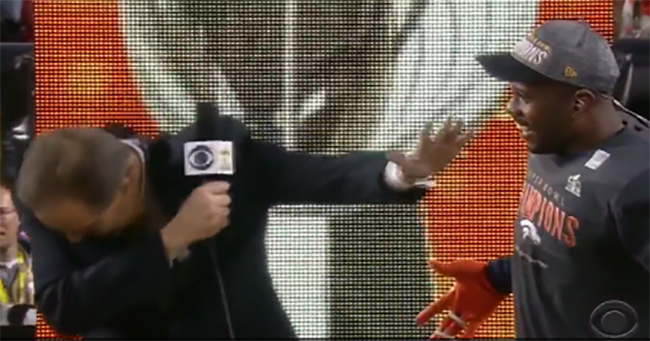 My coach @barcbobbill would like to thank Don Cherry for the use of the suit tonight pic.twitter.com/mQgrlZCY3d

Sure, Bob Plager! He’s a retired NHL defenseman who played 14 seasons. While that’s great and all, he’s HERE for the outrageous old school Batman suit, complete with matching tie.

Helpful Hint: If I really want to be critical, I’d say the button-down was a pretty bad choice. But I don’t care, now I know what I’m wearing for Halloween.

Thanks to everyone for all the birthday wishes. Loved the cake. Thanks @timandsid pic.twitter.com/OF2sI5dWky

Don Cherry celebrated his birthday over this past week and did so by wearing a suit with… goal sirens all over it? Of COURSE he did. He’s Don f”ing Cherry. So happy birthday, sir. No one could possibly discuss sports fashion without including you. 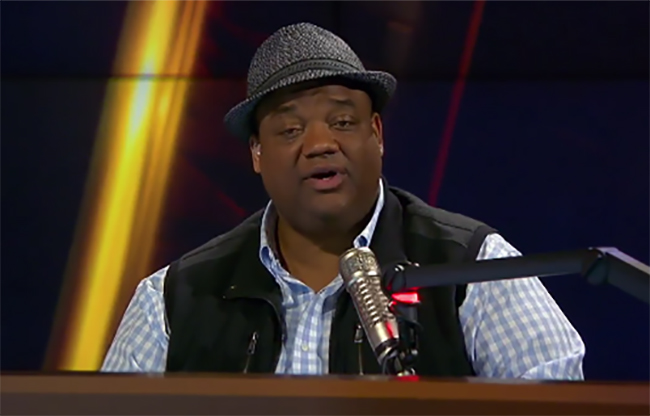 I like what Whitlock’s going for here with the jacket and vest look, but if he doesn’t send that light-blue checkered button-down directly through a wood chipper, I’d be more than happy to do it for him.

Helpful Hint: That does not mean to go shirtless when going with this approach. This is crucial to know.

What are you talking about dad? P.J. Rose, 3 sitting with his dad #ChicagoBulls Derrick Rose pic.twitter.com/9T533RBiFw

Check out P.J. Rose! Not only did he just vault himself into the mix for sports photo of the year, he did so in style. The little dude is just three-years-old and he already has a more fashionable jacket than 90% of society.

I suppose this is the Lakers “artistic” way of telling us it’s a bit chilly out? As usual, everything’s ruined by leaning on the strength of an emoji or two.

Helpful Hint: Please keep all photos in color so we can get a proper look at the attire. Thanks much.

A+, for busting out the old school championship sweatshirt.

F-, for lack of exuberance.

Spoiler Alert: The Knicks play quite frequently, so it would be wrong to pepper this thread with a slew of Clyde Frazier outfits, but boy oh boy did he deliver the goods this week. And really, that could mean great things or very bad things. In this case, it’s the latter. This ensemble looks like an old couch from the set of a 1970s sitcom. It’s hypnotizing.

Helpful Hint: Move up a couple decades and steal something from the set of Seinfeld.

Did I tell you or did I tell you? This jacket looks like it’s paying homage to some unknown video game. I don’t care if it’s three hours long, MSG needs to give us a full tour of Clyde Frazier’s closet and allow fans to vote on which five jackets he needs to give away to charity. I would certainly nominate this one. Then again, with a red tie, this would make for a lot of fun on Christmas.

Helpful Hint: Come on, Clyde. Reel it back in just a tad. I say this only because I care.

Hanging out with one of the Greatest QBs Of All Time, Peyton Manning, backstage at @FallonTonight! pic.twitter.com/rVB8XKbLC3

Peyton Manning and stylish will never be synonymous with one another, and I highly doubt he cares. But a button-down and sweater zip-up is about as wild and crazy as it gets for both him and Eli.

Helpful Hint: When you finally announce your retirement, shock the world by wearing Andre the Giant’s storied Tarzan trunks.

Between the hat, the gold chain, and the Jordan sweatshirt, Bennie Fowler miraculously comes away as one of this week’s winners. And that’s partly because he looks so damn comfortable and relaxed in the ensemble.

Helpful Hint: Please gift that hat to Pey-Pey along with the football.

Kobe Bryant giving away Mamba gifts and doing so in runway style. He may not shooting well, but the man can light up a room like few others.

Helpful Hint: Please tell me where you got that scarf. I don’t care much it cost, just tell me. #TeamScarf

Eddie’s been taking too many fashion cues from Sway. Or maybe that was the point here.

Helpful Hint: In any case, stop doing that.

Russ lookin’ laid back, happy, and dressed down for a change. Someone take a picture of this tweet in case it disappears and we lose this rare moment.

Helpful Hint: Don’t get too comfortable with this. We’ve all become too accustomed to the wide variety of “Russ Being Russ” looks.

Everyone needs to quit riffing on Cam Newton for one second and recognize his starter jacket game is on point. pic.twitter.com/brnwJcMuc8

No, there will not be any discussion of Cam’s postgame interview. We’re here to talk about Cam’s Starter jacket. That thing is so badass I’d wear it in a heartbeat, no matter the occasion. I might even send one to Clyde Frazier so as to turn down the volume a bit.

Helpful Hint: Please enjoy an offseason AWAY from the media.

Cam Newton one of many athletes that has embraced Superman. Here's Shaq & his leather jacket in 1993 pic.twitter.com/ZKebKIuh7O

Sure, it’s from 1993, but this is one of those “what if social media existed” moments. Shaq was far ahead of his time and, dare I say, just as flashy as Cam.

Helpful Hint: Shaq must wear this at least once on the NBA On TNT panel. The banter alone between he, Kenny, and Chuck would be worth the price of admission.

A+, for skipping school and another A+ for scoring an autograph on the hat.

This kid is a living legend at school now. A legend who’s probably serving detention if his teacher has an internet connection.

Wade Phillips: "And we got to see Lady Gaga!" #Broncos https://t.co/E388ksXPjP

The NFL season is over and this is just too good not to include. I also like how Wade Philips is quoting Wade Philips within Wade Philips’ own tweet. That’s something only a true diva would do, so it turns out this actually does qualify for the fashion roundup.

Here’s your obligatory Chris Berman all sweaty and a little scary photo.

Or shall I say photos. Jeeeeeeesus man, I know it gets hot under the lights, but you gotta clean yourself up for those live spots.

Helpful Hint: Bring a Gatorade cooler to dump over your head along with a huge bag of towels for every road trip.