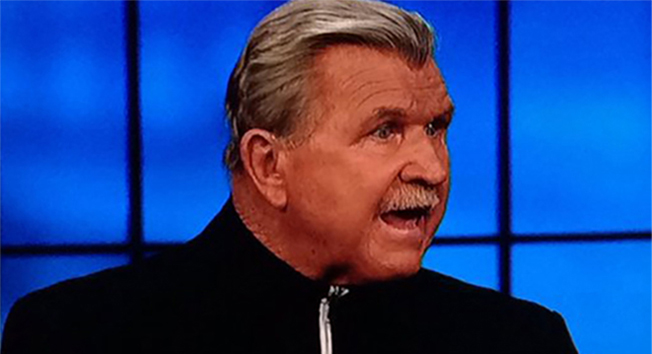 The sports world has always been full of colorful characters with a flair for the dramatic, both on and off the field. It’s not exactly a new thing. Just because Russell Westbrook chooses to wear an old-timey Where’s Waldo bathing suit or encase himself almost entirely in tinfoil — sending Twitter into a universal tailspin — doesn’t mean he’s responsible for blazing some new, unfamiliar path. 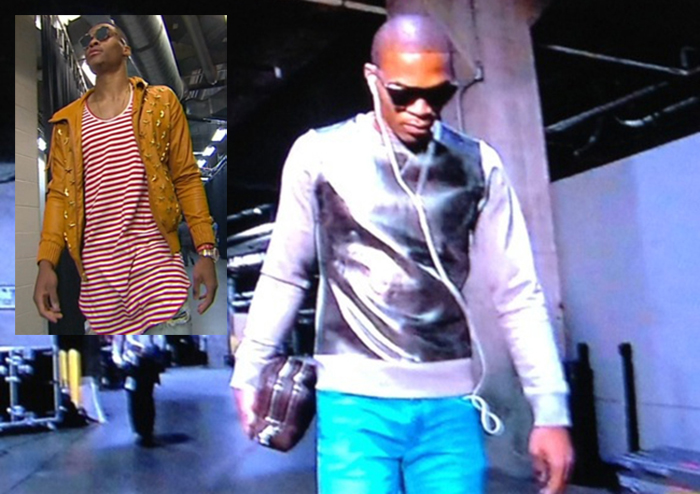 Sports and outrageous fashion statements go all the way back to Joe Namath’s fur coat. Then Clyde Frazier took the baton and, well, the rest is history. But fashion statements in sports are by no means athlete exclusive. We’ve witnessed Bob Costas expertly channel a 1930s paperboy and Mike Francesa pay shaky homage to the great Johnny Cash. And then there’s always the colorful fans, who have their own way of uniquely expressing themselves, with the level of effort put forward usually coinciding with just how bad their team sucks.

And that, in a nutshell, is what this space will be dedicated to. Behold, the week that was in mostly terrible sports fashion!

Bob Costas has been a prominent figure in the sports world ever since the “14-year-old” joined NBC 35 years ago, yet he still combs his own hair with the focus of a trained assassin while someone else reluctantly holds up a mirror for him. There’s but one problem here: Have you seen Bob’s hair? It’s the first day of kindergarten every time the guy pops up on our television screens for Sunday Night football.

Helpful Hint: Bob holds the mirror and the stylist does the styling.

Someone tell me why Chris Berman is wearing a Vera Bradley Designed tie? pic.twitter.com/afIfqcE0LS

Chris Berman often goes with the “father’s day tie that never sees the light of day” look. It’s become part of his shtick. But that doesn’t make it any less ridiculous that he’s basically wearing my sister’s diaper bag on his chest.

Helpful Hint: Forget about the tie and get some sleep, man. 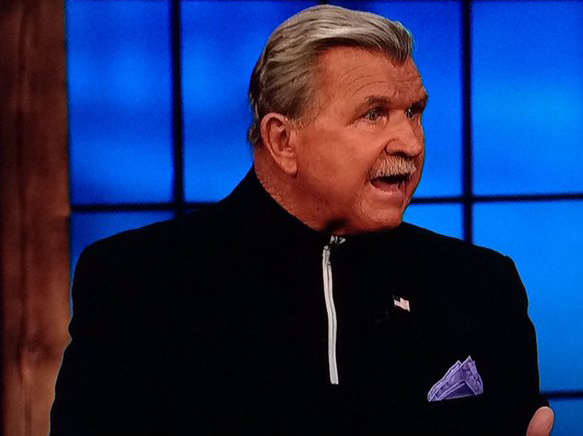 Yes, The Force Awakens finally hits screens worldwide tomorrow and the spirit — or the force, rather — has inspired ESPN’s Mike Ditka to go full Jedi. I must say, the light saber zipper is a nice touch. Nonetheless, this guy hasn’t been the same ever since he threw on that Packers sweater.

Helpful Hint: That pocket square was intended for Jesse Ventura’s head, not your pocket. Also, no spoilers, please.

Tannehill got destroyed there. But no need to worry. Per source, Larry King is throwing DARTS on the practice field. pic.twitter.com/WxLqm9cUm2

Wow, Larry King in a Ryan Tannehill jersey with one shoulder pad attempting to make a great escape. Can hardly blame it. While it’s awesome to see the 82-year-old radio and TV legend staying active and having fun, no one is impervious to the “jersey over dress shirt rule.” It just can’t happen. Doing such a thing is akin to tucking your jersey into a pair of khakis or cargo shorts.

Helpful Hint: Buy a Marino jersey and get your shoulder pads under control. 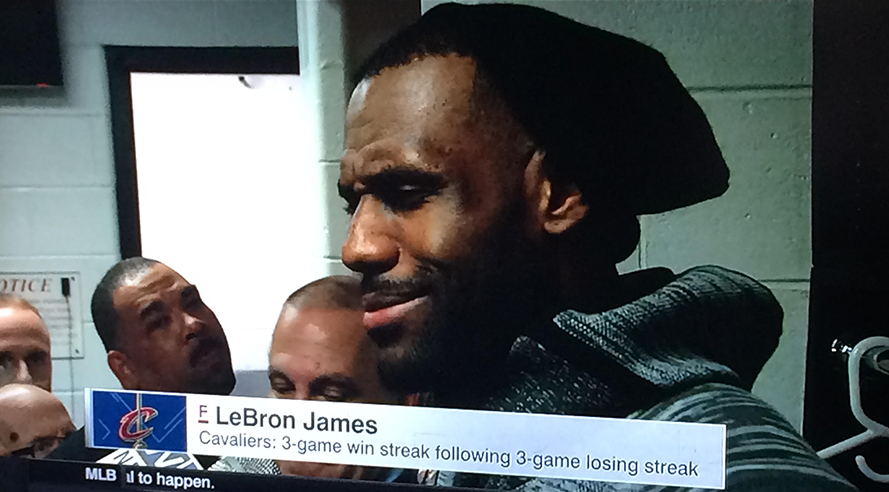 In short, NO. This look only works on some dudes, usually ones with long hair. LeBron would be far better served wearing a Marv Albert wig or one of his signature headbands that are frequently mistaken for an enormous ACE bandage.

Helpful Hint: Ignore snarky comments like the ones above and look at your bank statement. 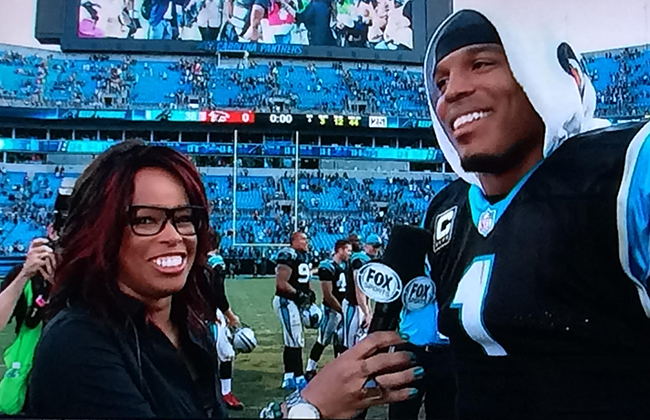 This is a new one. While Pam Oliver’s glasses read “smart, independent-thinking newsperson,” a style we are totally in favor of, the nail polish and a ring that match the color of the home team shows blatant favoritism. Her face may say impartial journalist, but her hands are saying “go Panthers.” Hand favoritism; a broadcasting no-no.

Helpful Hint: Root for the Giants this Sunday.

Steph should play the rest of the game in this. pic.twitter.com/SQaT7O6Sjn

Admit it, this look hasn’t been popular ever since Ralphie took a daily beating in A Christmas Story. But alas, this is Steph Curry. And while I’m hardly an NBA junkie, this hat better be sitting under the tree on Christmas morning. The Warriors have probably seen a sales jump of 3,000% since he first wore this on TV, and for good reason. This dude has already made me change the channel to a Nets game on NFL Sunday.

Helpful Hint: Give one to LeBron. He badly needs hat help. 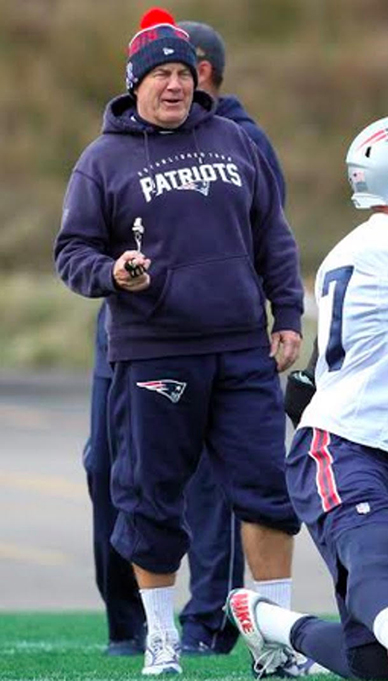 One of the best things about Bill Belichick is that despite the tremendous amount of success he’s seen as one of the greatest coaches in the history of the NFL, his care factor as it relates to his appearance is amazingly still a few notches below George Costanza happily draped in velvet. That’s pretty hard to do.

Helpful Hint: Turn those pants into hastily trimmed shorts and ditch the idea of wearing shoes entirely. Oh, and add a few mustard stains to the sweatshirt.

This isn’t about “Isrial” Gutierrez. (Note to ESPN: it’s Israel, like the country, not like whatever your graphics guy thought it was.) It’s about the “stylistic” fans behind him, particularly the gentleman sporting a Kobe Bryant t-shirt jersey, a giant gold chain, and construction boots. And that’s just a tiny sampling of what you’ll see at a Lakers game.

I feel like this jersey should be carefully removed and put on display as one of the chief exhibits at some random art show in Brooklyn.

As frightening as this is, it’s equally scary that someone could probably talk me into believing there was no photoshop work done here, and that this is simply the most unnerving “Kobe stare” of all time. (Ed note: The Emperor’s Sith name is Darth Sidious. Darth Emperor is ridiculous.)

Helpful Hint: The hood heightens Kobe’s cold-blooded persona. I strongly recommend he keep it on. Forever.

We hear you at the Linc, Bills fans!

Where around the world are YOU watching this game? #BillsRollCall pic.twitter.com/QyYIZQV0mw

If only this man could harness all the effort it took to put this outfit together — along with painting a Bills logo around his eyes, nostrils, and mouth —  into something worthwhile, he’d probably be watching games from a suite and drinking for free.

Helpful Hint: Viciously berate yourself in the mirror.

Blake Griffin with a branding victory that would cause Darren Rovell to foam at the mouth and it wasn’t even Blake’s idea! Remember, this space covers “mostly terrible fashion” and this instance definitely falls outside of terrible. Smooth, clean look without being overstated, to go along with a pair of kicks fresh out of the box.

Helpful Hint: Just concentrate on making sure you’re not the last guy in the locker room.

This is from two Sundays ago, but it had to be included because wearing a giant buffalo wing as a hat and chugging bud light pounders (with a backup in tow) is peak NFL fandom. It’s the dumbest, greatest thing I’ve seen all season.

Drake's wondering if the Warriors can go back to back. pic.twitter.com/ywHQCSG4Fy

Drake was at the Warriors game last night and at the Kings game on Tuesday night. The guy is everywhere in the NBA and the camera usually finds him, so chances are he’ll end up here too. With that said, whoever helps Drake shop for his watches — like the showstopper he’s wearing here — should also help him shop for hoodies.

Helpful Hint: Pledge your NBA allegiance to the Warriors just to see everyone lose their mind. 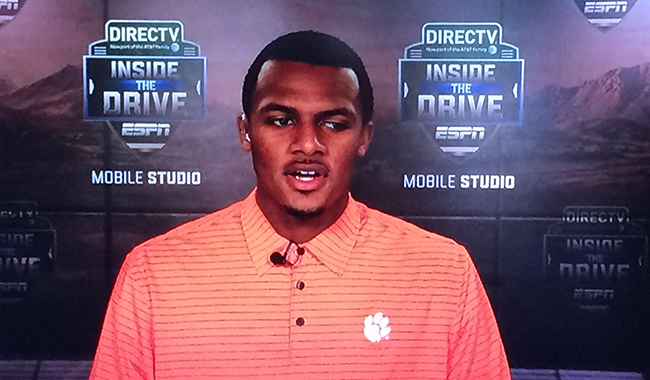 This an easy one: Under no circumstances should a person ever button the very top button of their polo unless their intention is to be highly uncomfortable and possibly choke. Geez man, even professional golfers aren’t this conservative. I’m guessing the choice here by Deshaun Watson probably cost him at least a dozen Heisman votes.

Helpful Hint: Literally undo one button and you are golden.

These glasses look like they came with a limited edition bag of Tropical Skittles. Otherwise, a very spirited look from Russ which we’ve come to know and embrace.

Helpful Hint: To be honest, all I care about is you meeting Steph Curry in the Finals.

A double dose of Russ should come as no surprise. While I realize rocking the “giant undershirt stolen from Shaq’s dresser” is a look that’s gaining some serious steam, it’s just not working. It makes the 6’3 guard look like he got zapped with a shrinking gun. Plus, Justin Bieber does the same exact thing. And we all know you’re better than the Biebs, Russ.

Helpful Hint: Do not scuff the floor with those Timberlands. 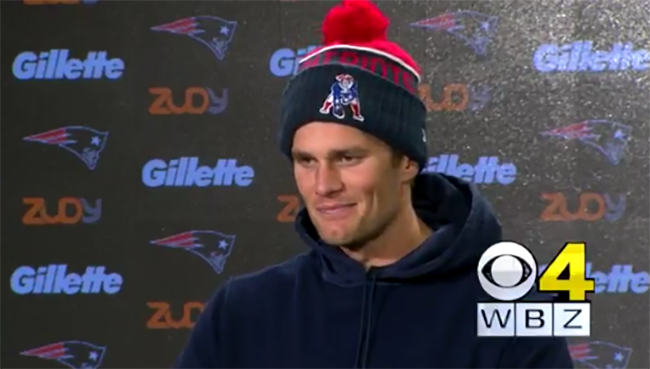 It’s funny that the same guy who can be seen wearing a sweater made out of exotic animals and a scarf wrapped around his neck 16 times, also dresses like someone who was told he can go out and play but must be home before dark.

Helpful Hint: It was mid-50’s in Boston yesterday, Tom. Take off the jolly snow hat.

Happy birthday @DwightHoward! I love you and got that ahhh!

Felix the Cat? Incredible. Always nice to end on a high note, as this is easily the most likable moment of Dwight Howard’s entire career.