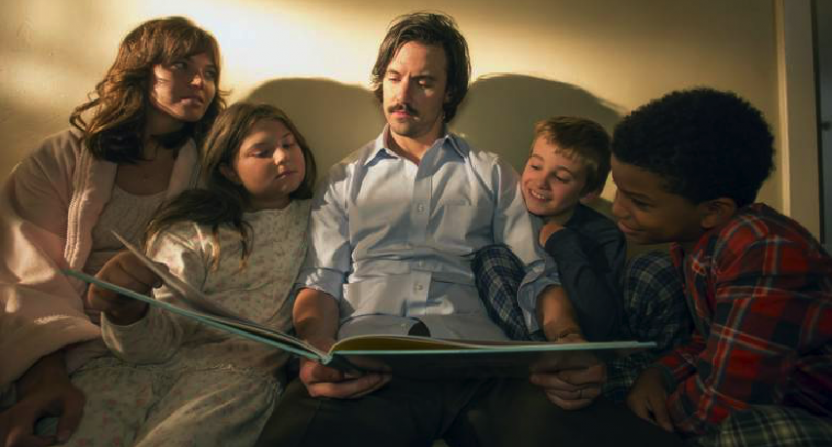 NBC’s new hit drama This is Us has struck a chord with many people, including me. It’s far from a perfect show (*cough* Toby *cough*), and can occasionally drown itself in its own syrupy sweetness or one-note portrayal of characters.

But sometimes, you need a bit of treacle in your life and to not think too hard about character motivations. This is Us fills that need. So let’s explore what the show is doing right. This post contains spoilers through episode 16.

1. Milo Ventimiglia has become the only Milo worthy of being in the news.

His portrayal of Jack Pearson, ghost dad, should become everyone’s #dadgoals. He is sweet, he is sincere, and he cares passionately and unfailingly for his wife and children. In fact, if Jack has a flaw, it’s that he’s TOO good of a dad. (Well, that and the drinking too much thing. But he handled that for love of his family. Or seemed to. There are some projections in the “next week on…” that I hope are the kind of head-fakes those things do.)

No dad is that great. No dad balances the needs of his adopted son and handles his tween daughter with the deftness that Jack does. He vogues with her while doing far better than anyone in the Pearson household to understand Randall’s complicated background and anxiety. He turns every negative into a positive, including a failed Thanksgiving trip that becomes a family tradition. He puts every dream he has on hold to make sure his family has the best of everything, staying in soul-sucking jobs and buying houses out of the blue.

From playing the Paul Simon Graceland tape to the bushy mustache, he’s a reminder of my own thriving in the 1980s dad. (Still living. Hi, Dad!) We already know Jack’s time on this earth is short, his death having a profound impact on his kids, the reverberations of which are still playing out. I expect a lot of facial waterfalls from all of us when we finally get the story of Jack’s death. He is adored by every other character he’s interacted with in the show, Randall calling him “larger than life” in the most recent episode, Miguel reminding Kevin “You’re Jack Pearson’s son.” He is the very heart of this show.

2. What Jack Pearson is to the Big Three, Gerald McRaney’s Nathan Katowski is to Jack.

We learn that Jack’s dad is, at the very least, problematic. But Nathan, the man Jack serendipitously meets the night his children are born, provides the sage father figure Jack needs. He offers him wisdom, guidance, and a kick in the butt.

McRaney’s gravelly voice is perfect for the gruff, yet loving and sweet, Doctor K. I don’t know how much Doctor K we’re going to get, as he exists to deliver the Pearson kids in 1980, but the more use the show can get out of him, the better. They’ve done well with him so far, building out his own backstory as we watch him overcome the grief of his wife’s death, but I’m not sure what his place is in the future, as he’s already an old man when we meet him. Frankly, I’m fine with a modern Doctor K reincarnation if you’ll give us more of him, This is Us.

3. Ron Cephas Jones as William Hill may be the most interesting and fully realized character on the show.

Kate is fat. Kevin is an actor. Randall works too much. But William? He contains multitudes.

What could have been a pat story of the addict dad who abandoned his kid at a fire station turns into so much more. It may have something to do with the notion that William was dying, creating a finite time for the son who just found his biological father to connect with him. That, in turn, creates more tension, but it’s still a wonderful portrait of a man.

William is a musician. William has lived a hard life. William has soul. William speaks in poetry, in his soft low voice, and it never sounds forced or false. William gets high with his new daughter-in-law and teaches his granddaughter chess and has a cat. (Where’s the cat?!) William is revealed as bisexual in a moment that is so delightfully normal, Randall’s young daughter has to point it out to her dad. William puts things in perspective for Randall, helping him claim some work/life balance. He sees through Kevin and even puts Rebecca’s stunning betrayal into perspective for Randall.

Before the show let him go (in his present form; I don’t know what the plans for flashbacks are), they gave him a wonderful send-off in a episode focused on him and Randall and their journey back to William’s hometown of Memphis. The use of music, which has been exemplary throughout the show, was particularly on point in Memphis, with the African-influenced beats as they start out, the soul music, and the bookends of the refrain of “You Are My Sunshine.” William will be very much missed.

4. This list has shown me a glaring problem with This is Us: The women.

We need more of them and we need them to be more fully drawn. We need Rebecca to be less of the shrill woman who has questionable decision-making skills, and we need Kate to be more than her weight. We need women to not be pawns to Kevin.

We need all of that to start with Susan Kelechi Watson’s Beth Pearson. She is smart, she is loyal, and she loves her family. She has more in common with Jack in her reaction to her husband and family than to just about anyone else in the show does. I am eager to know more of her and Randall’s long history, of how their relationship came to be, and how she came to be who she is outside of Randall. What she has shown us so far is her depth of perception, calling Randall out on his bullshit, giving excellent side-eye to Kevin, her playfulness in getting stoned with William, and her conflict over having another child.

We need more Beth. And less of some other characters (*cough* Toby *cough*).

Okay, so, this one is problematic. Alan Sepinwall at Uproxx had a good take on some of the problems with Kate’s portrayal. He’s right; she does deserve better stories and stories not focused solely on her weight. I want to know about her and Jack watching football. I want to know what she was doing for work before she became Kevin’s caretaker (who is an adult grown-ass male and shouldn’t need one). And some of how she behaves is a wee bit immature for her place in life.

Kate is 36, mind you, no longer the angsty tween she was. But I think he’s wrong in that her weight absolutely should be discussed and deserves a fair amount of storytelling. Too often, we don’t discuss what it’s actually like to inhabit a fat body. Stunts of “pretty person dresses in fat suit and finds out life is hard!” are hardly an accurate or fair depiction.

To further counter Sepinwall’s points, I wish we had seen Gilmore Girls‘ Sookie say, and I’m sure at some point she did think, “I wish it was easier to buy clothes.” Or said something to Lorelei in an off-hand way about wishing she could look like her.

One of the truest things Kate ever said was that she thinks about her weight all the time. As a fat person, that got me. Because it’s true. Even when you’re not thinking about it, you’re thinking about it. You joke to deflect it, sure, as Toby does. But even if you don’t explicitly discuss weight, or it’s not at the forefront of your mind, you’re still calculating based on it. There’s the utter fear of restaurants with tables that are too tightly packed. And the being constantly aware of the space you take up, a topic Carmen Machado recently tackled so beautifully in Guernica.

Not only that, the message of being insecure and navigating the world is not in any way limited to fat people. Kate could discuss with Kevin how she understands his crippling self-doubt; it’s a thing they have in common. She could discuss with Randall how she has her own anxiety and soothes it with food.

So while the show definitely needs to find balance with Kate and not make her only about her weight, and her interacting with other characters on their issues and not so much with Toby, I’m thrilled to see an actress who isn’t miraculously relegated to thin two episodes in and whose weight we don’t just ignore or play for big pratfall laughs, the other way Melissa McCarthy uses her weight, but instead addresses head-on why the fat chick may not want to go to a fancy Hollywood party full of skinny ones.