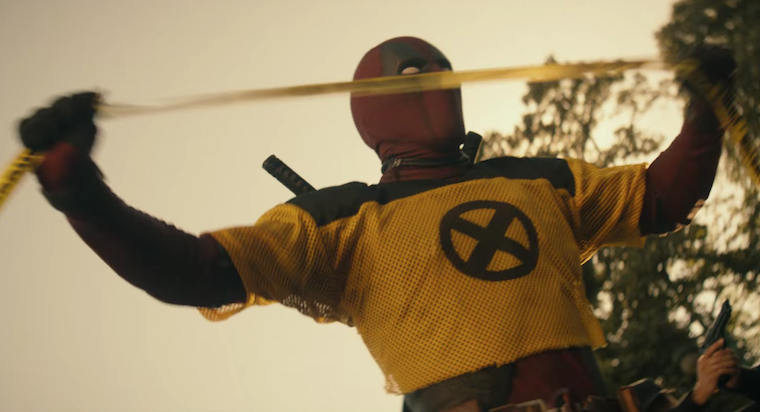 Trailers! We love ’em here at The Comeback. Sure, we’re eager to see the movies they promote. But sometimes, the previews are better than the movies or TV shows they’re advertising. But a good trailer is also a form of entertainment all by itself.

This week had some blockbuster flavor with a new trailer for Deadpool 2. We also got a look at what could be one of the most unusual movies of the year in Tag, and another look at Cobra Kai. There are also plenty of other films that should be worth seeing, including the Mr. Rogers documentary Won’t You Be My Neighbor and a different, more serious turn for Melissa McCarthy.

Good timing on this Deadpool 2 trailer, which was released in the wake of reports that several reshoots were done. But the reshoots reportedly weren’t a response to bad test screenings, but audience notes that they wanted to see more of new characters Cable (Josh Brolin) and Domino (Zazie Beetz).

This new red band trailer isn’t reflective of that — probably because it was put together before the reshoots — but maintains the comedic tone that made the first Deadpool so popular. The juxtaposition of Dopinder (Karan Sohi) listening to Air Supply while waiting for Deadpool, who’s running away from a deadly fate, and the violence that results essentially sums up the tone of these movies perfectly.

We also get a better sense of what the story is and why Cable has come from the future to cross paths with Deadpool. He’s after a young mutant (played by Julian Dennison, Hunt for the Wilderpeople), though we don’t know why. Is he a threat to the future? Is his mutant power required for a particular task? Is it just funny for Cable and Deadpool to fight over a pudgy mutant?

But the big takeaway is probably the outright mention of X-Force (which might be a little derivative). We still don’t know who exactly is in the group, but Deadpool, Cable and Domino are the featured players anyway. Along the way, however, Deadpool 2 will have plenty of fun at the expense of the X-Men movies.

Sicario: Day of the Soldado – June 29

Enough of this “Sicario 2: Soldado” stuff. This movie is now Sicario: Day of the Soldado! Even after more than four years of Spanish classes, I had to look up “soldado” to learn that it means “soldier.”

Is this an attempt to make this seem like more of a standalone film since Emily Blunt’s character won’t be in this one, focusing more on Alejandro Gillick (Benicio Del Toro) and his quest for vengeance? Along the way, that helps agent Matt Graver (Josh Brolin, who’s going to have a great 2018) get to take down Mexican drug cartels by any means necessary.

But do Gillick and Graver eventually split over a young female witness (Isabela Moner)? Or is that just a dramatic speed bump on the way to mowing everybody down with a bunch of machine gun fire?

This has the potential to either be the dumbest movie of 2018 or a pleasant surprise. Tag looks like a possibly heartwarming story of a bond between a group of friends, albeit under the highly unusual circumstances of playing a kid’s game for 30 years.

A cast including Jeremy Renner, Jon Hamm, Ed Helms, Isla Fisher and Hannibal Buress certainly makes this look promising. Renner seems perfect as the one in the group who’s just a bit cooler than the others. (He’s Hawkeye!) With Jake Johnson and Annabelle Wallis, maybe we can also pretend this is a sequel to last year’s The Mummy. Although we should all try to forget that movie.

But don’t you want to see this to find out if it actually works?

After a handful of teaser trailers, YouTube Red has finally released a full trailer for the Karate Kid sequel series, Cobra Kai. And we finally have a release date: May 2! Each subsequent teaser revealed a bit more of the comedic tone of a series that most everyone will likely think is ridiculous at face value. Did we really want to see what Daniel LaRusso and Johnny Lawrence were doing 34 years later?

Although the idea of Daniel being the bad guy here and Johnny being the hero (or at least the main character) is intriguing. (Titling the series “Cobra Kai” was probably a big nod in that direction, right?) The use of Airbourne’s “Back in the Game” here is spot on too. Maybe that’ll be the theme song of the series?

Under the Silver Lake – June 22

Director David Robert Mitchell might have been expected to make another horror movie after It Follows. But like David Sandberg doing Shazam!, Mitchell is doing something a bit different. Based on this trailer, Under the Silver Lake still has a dark tone, but it’s a quirky stoner comedy along the lines of Inherent Vice or maybe even The Big Lebowski.

Will the premise of conspiracies and hidden messages be something used in subsequent marketing? Probably not. But this being an A24 film (along with Andrew Garfield as the lead and Riley Keough as the dream girl) indicates the movie will be worth watching, regardless.

It feels easy to say that we need someone like Mr. Rogers more than ever in our current culture. There’s certainly a lot of warmth in seeing old footage of Mister Rogers’ Neighborhood and hearing Fred Rogers’ gentle voice.

But the trailer for Won’t You Be My Neighbor reminds us of how important Rogers was in the lessons and messages he would try to teach his viewers. Explaining divorce to children? Racism? Children’s TV would never touch such topics now. Even though many cartoons have educational elements, they’re full of escapism.

Maybe Mister Rogers’ Neighborhood was a form of escapism too, but it was a place — a neighborhood — where kids could learn and find at least one friend.

How far as Melissa McCarthy come as an actress? She’s taking on serious roles that were originally going to actresses like Julianne Moore.

Lee Israel was a writer of biographies that eventually fell out of favor because they didn’t take a closer or unflinching look at their subjects. To make a living, she began forging letters supposedly written by famous authors. Eventually, though, maybe she pushes it too far and people catch on to her forgeries. This looks like an all-too-depressing look at the life of a writer.

But it’s great that McCarthy is getting to play roles like this now. And the next film from director Marielle Heller, who did such good work with The Diary of a Teenage Girl, is worth getting excited about too.

Netflix has become the home of ambitious sci-fi projects that are either too expensive for networks like Syfy and either too risky (or not good enough) for major theatrical releases. Whether or not Netflix is becoming the new straight-to-video remains to be seen, but with films like Bright and The Cloverfield Paradox, it’s certainly looking that way.

Sam Worthington once seemed poised as the next big thing following Avatar, Terminator: Salvation and the Clash of the Titans remake, but his career hasn’t quite worked out that way. But maybe he’s on the rebound after his role in the Discovery miniseries Manhunt: Unabomber. And he’s now busy with a whole bunch of Avatar sequels that are finally filming. Playing a soldier who becomes something else, something alien after being subjected to experiments certainly looks intriguing.

By the way, it’s interesting to compare this trailer to a previous one that had been released (probably before the film went to Netflix), which had no problem showing more of what Worthington’s character had mutated into and maybe played up more of the story’s horror elements.