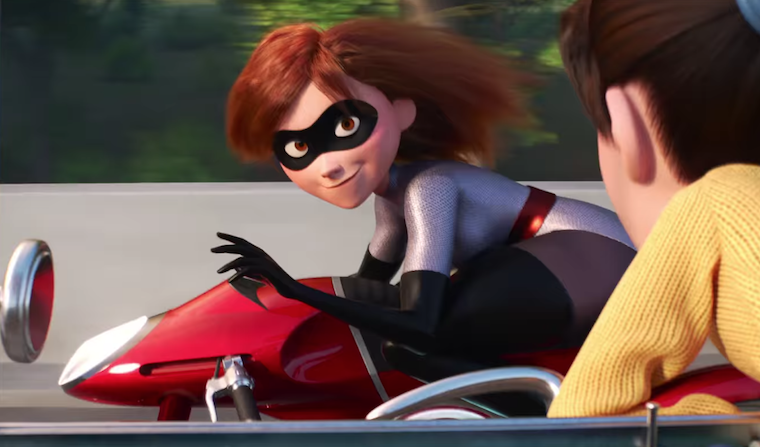 Trailers are a big favorite of ours at The Comeback. Sometimes, they’re better than the movies or TV shows they’re intended to promote. But they’re also a form of entertainment all by themselves.

During the week, we covered trailers for the Uncle Drew movie, starring Kyrie Irving and several former NBA stars, and the upcoming Karate Kid sequel series, Cobra Kai. But plenty more trailers debuted, including a first look at The Incredibles 2 which played during the Winter Olympics. We also got new versions of previously seen trailers, such as A Quiet Place and Ready Player One.

The first teaser trailer for The Incredibles 2 showed the central premise for the sequel. The latest addition to the Parr family is showing superpowers as an infant, and looks to be far more powerful than anyone else in the family.

This time around, we see that Bob/Mr. Incredible is left to take care of the baby because Helen/Elasti-Girl is in demand as a covert operative, which suits her skills more than brute strength would. By the way, superheroes are still deemed illegal by the government!

So will Bob and the kids, Violet and Dash, be able to suit up and join in the action (hopefully bringing along Frozone too), or is being a father and supporting his wife’s success his new form of superheroing? As Edna Mode says, parenting is a heroic act — if done properly. Maybe the real hero in this story will be a babysitter or nanny.

The trailers for Ready Player One have demonstrated the difficulties in promoting this story. In the first trailer, we were introduced to a future in which a video game, the Oasis, provides the only real form of escape and entertainment. The follow-up showed us what was at stake for those who really wanted to compete, not just escape.

In the last preview before Ready Player One‘s release, we get the bigger picture of what’s going on here (while also meeting Art3mis, a fellow gamer and love interest for our hero). The corporation trying to take control of the Oasis and monetize it has conspiratorial plans to take over even more, and a rebellion is developing to prevent that from happening.

Will the premise and story be enough to draw people in and make a good movie? (Steven Spielberg directing surely helps with that.) The pop culture references that so many loved in Ernest Cline’s novel will be fleeting on screen and we’ll likely see plenty of articles detailing those references afterwards. Ready Player One might be a bigger hit on video, when people can rewind, pause and obsess over those many easter eggs.

This latest trailer for Pacific Rim: Uprising is meant to show the kind of widescreen, blockbuster action that will look great on an IMAX screen. Understandably, people won’t go to see a movie on IMAX for character moments. So we don’t see much of John Boyega or Scott Eastwood here.

Instead, there’s a whole lot of giant robots battling enormous beasts, with major cities as their sandboxes they play in. Based on the footage shown here, director Steven S. DeKnight may also show more of the pilots using their weapons and acting out their fight moves than Guillermo Del Toro did in the original. Gotta make them part of the action too.

This looks like it could be too much of a good thing. But if you grew up watching Ultraman, Johnny Sokko and Godzilla movies, wondering when the hell the action was coming, more action and fighting is surely your style.

Apparently, a glorious anime treatment of Batman will be released on video, rather than theatrically. Based on the trailers that have been released, that’s a damn shame because Batman: Ninja looks like a spectacular interpretation of the character and his mythology and would look great on the biggest screen possible.

Previous looks at the film focused on the animated spectacle that was being created. And it looks awesome: DC’s iconic Dark Knight in an anime setting, pushed back into the time of feudal Japan and samurai wars. We get a little more story in this preview, explaining that Batman doesn’t have his arsenal of weapons, gadgets and vehicles at his disposal, forcing him to use his mental and physical gifts (along with allies like Nightwing and Catwoman) to defeat The Joker, Harley Quinn and Bane.

Maybe this will get a one-night only Fathom Events release? Here’s hoping.

At the end of 2018, when we do another list of who had the best year in pop culture, Donald Glover could very easily be on top. He’ll play young Lando Calrissian in Solo: A Star Wars Story and prior to that, we’ll get the second season of Atlanta on FX. (Next year could be a big one for Glover too, with a role as Simba in the live-action Lion King film, along with the music he might produce in his new deal with RCA Records.)

Based on this new trailer, Earn (Glover) is still living in a storage bin, so his career as manager for Paper Boi apparently hasn’t gone as planned. (Maybe Paper Boi’s music career hasn’t taken off as hoped, either.) But with the subtitle of “Robbin’ Season,” bad things might be in store for the guys. Or at the very least, what good fortune is found may not last very long.

The third trailer for A Quiet Place doesn’t reveal much more than the first two previews did. A young family lives in a secluded house in the woods and, for some reason, can’t make a noise for fear of bringing on monsters. Why do they live in that house? But the second trailer revealed that a war of some sort wiped out most of humanity, at least in the region where the characters played by John Krasinski (who also directs the film) and Emily Blunt live with their three children.

What we don’t quite know is whether these creatures are alien or came from somewhere on this planet. Maybe we’ll find out that we somehow created them by treating the environment so poorly. The big revelation in this new preview is that Blunt’s character is pregnant, which probably makes it difficult to flee from attackers. (Though it also answers the question of what a husband and wife might do living in seclusion with nothing much to do when the kids are asleep. Just don’t make any noise.)

On the latest Meet the Movie Press vodcast, host Jeff Sneider didn’t seem to think highly of Gringo, though didn’t go into detail. (If so, that’s a rough stretch for David Oyelowo, who was also in The Cloverfield Paradox.) That’s disappointing because this looks like a potentially sharp satire of Big Pharma and the war on drugs with a great cast, including Charlize Theron, Joel Edgerton, Amanda Seyfried and Sharlto Copley, directed by a talented filmmaker in Nash Edgerton.

Of course, the story could be ludicrous with some over-the-top performances. Or maybe it’s not outrageous enough, holding back when it really counts. We’ll find out in a few weeks when Gringo hits theaters.

It feels pretty safe to say that FX’s new series about the John Paul Getty III kidnapping doesn’t have to worry about being overshadowed by All the Money in the World. Ridley Scott’s film, released at Christmas, drew plenty of publicity for replacing Kevin Spacey with Christopher Plummer, but audiences weren’t interested during the holidays. (Unfortunate, because it was a pretty good movie.)

Trust, starring Donald Sutherland as billionaire J. Paul Getty, Hilary Swank as Gail Getty (whose son is abducted) and Brendan Fraser as James Fletcher Chace, a very different version of the fixer from the one Mark Wahlberg played for Scott. Chace may also be the narrator/host of this story, based on what’s seen in this trailer. This looks way more over the top, colorful and fun than Scott’s deadly serious take, which was entirely appropriate for that interpretation.

“That’s a big arm. Don’t fight it.” OK, that’s a funny line from Dwayne Johnson. Hopefully, there are plenty of more of those in this movie.

If you ever wanted to see The Rock in a Jurassic Park, King Kong or Godzilla movie, Rampage is the blockbuster for you. Fans of the video game this movie is based on will likely recognize George, Lizzie and Ralph as the three gargantuan beasts laying waste to major cities. Will the story go across the country like the game did or keep the action in California?

This trailer seems to give away a big twist with George eventually turning good again to team up with Johnson against the other monsters. By the way, Johnson’s character is named Davis Okoye, according to IMDb. Along with General Okoye, leader of Black Panther‘s Dora Milaje, 2018 could be the year of Okoye. (What a team-up that would be.) Wherever Christian Okoye is, it might be a good time to milk some money out of that last name.