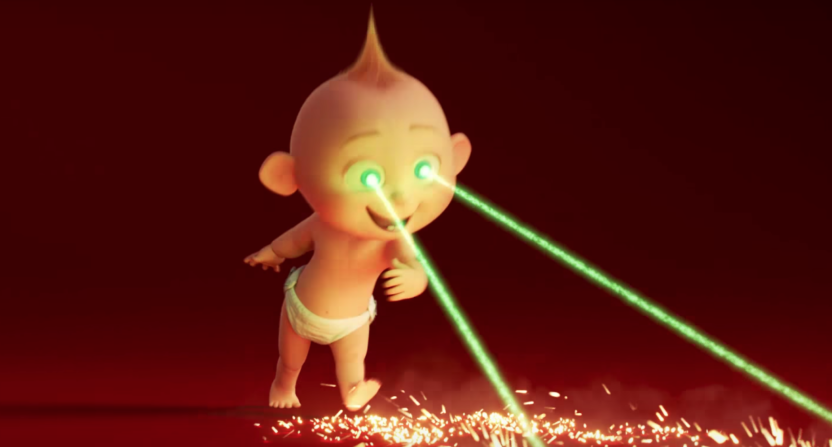 This week, we got a surprise look at a long-awaited superhero sequel (and beloved Pixar film), the return of Deadpool, Dwayne Johnson against giant beasts, and the imagination of a 10-year-old kid brought to life 40 years later. It was a fun week, people.

College football fans got a nice surprise when a teaser trailer for “The Incredibles 2” debuted Saturday morning. The wider fanbase got to join in the fun soon after when the first look was posted online.

Clocking in at less than a minute, this is very much a teaser. But it appeased all the pent-up anticipation for a sequel to “The Incredibles.” Has it really been 13 years since Pixar gave us arguably one of the best superhero movies ever made? Pop culture has certainly changed a whole lot since then, as superheroes are the blockbuster of choice for Hollywood.

And based on this teaser, “The Incredibles 2” is going into previously unexplored territory for superhero movies. What happens when superheroes have a kid? (If Fox had gotten the Fantastic Four franchise right, maybe that would’ve been covered by now.) It’s just fun to see that logo and Mr. Incredible (voiced by Craig T. Nelson) back again.

With Dwayne Johnson in safari gear, how many people will confuse this for another “Jumanji” trailer? The Comeback’s Kevin McGuire went into deeper detail about the video game that “Rampage” is adapted from, in addition to the terrible track record of movies based on video games for us earlier this week.

Between this and “San Andreas,” director Brad Peyton knows how to put Johnson in a helicopter flying over a disaster area. But this time, the main character gets to take on monsters instead of just stare at an earthquake and save people. If you ever wanted to see The Rock take on King Kong and Godzilla, this is apparently the movie for you.

John Krasinski will be seen on screen next year in Amazon’s “Jack Ryan” series. In addition to becoming kind of an action hero, he’s also working on an intriguing career as a director. Krasinski has directed two films previously, neither of which broke out from their indie status. But a horror movie could draw some notice.

Though we only get a teaser, the premise of this is very intriguing. Krasinski and his real-life wife Emily Blunt play the parents of a family living in a house under curiously restrictive circumstances. Monsters or ghosts lurk, but don’t attack unless they hear a sound. So the family communicates in sign language, plays with soft toys, etc. But then one of the kids creates a disturbance which draws out whatever haunts that house.

So why didn’t that family ever just move someplace else? Maybe “A Quiet Place” will answer that question.

OK, maybe this doesn’t really count as a trailer. But it’s fun with some notable star power. For Jimmy Kimmel’s 50th birthday, Ben Affleck and J.J. Abrams presented him with a live-action version of a comic book that the talk show host drew when he was 10 years old called “The Terrific Ten.”

Hopefully, Kimmel wasn’t already in on this (and he seemed embarrassed enough for that to be believable) because it would be so much more fun that way. And frankly, a bit touching that Affleck (promoting “Justice League”) and Abrams (set to direct the next Star Wars film) would team up, assemble a cast including Zack Galifianakis, Shaquille O’Neal and Kimmel’s arch-nemesis Matt Damon.

Go ahead and make your jokes that this looks better than “Justice League.” Affleck probably beat you to that one.

Now this is how to do a teaser. The marketing for “Deadpool” was brilliant and “Deadpool 2” appears to be continuing in that hilarious spirit. Ryan Reynolds does a great job channeling the late Bob Ross, which has to be even more difficult while wearing the Deadpool suit. But it’s just the sort of thing that the Deadpool comics would do.

Do we get a little glimpse of Cable (Josh Brolin) once the montage of footage begins playing? Hard to tell, but that’s probably who it is. (We definitely see Cable’s bionic hand at the very end of the teaser.) Negasonic Teenage Warhead (Brianna Hildebrand) with a full head of hair shows character growth (literally), but the middle finger demonstrates that she still has that attitude we love.

New director David Leitch (“Atomic Blonde”) may be making a sequel even more gloriously violent than its predecessor. By the way, is the title not “Deadpool 2”? IMDB lists the movie as “Untitled Deadpool Sequel.”

If the first trailer for “The Greatest Showman” didn’t make it clear, the second trailer certainly does: This is a musical which gives Hugh Jackman a chance to show off the song-and-dance talents he hasn’t really displayed on screen, other than “Les Miserables.” (Wolverine doesn’t sing, does he?)

But the title cards also make a point of mentioning that the songs are written by the lyricists from “La La Land,” so music is obviously a big part of this semi-biopic about legendary businessman and showman P.T. Barnum. With a good cast and inspirational story, “The Greatest Showman” really does look like perfect family-friendly holiday fare and figures to be a hit during the Christmas holiday.

Cable miniseries are having a moment. Discovery’s “Manhunt: Unabomber” was impressive and National Geographic’s “The Long Road Home” is off to a promising start. “Waco” has some recognizable star power with Michael Shannon, John Leguizamo and Taylor Kitsch as Branch Davidian cult leader David Koresh.

The preview for “Waco” is cut very much like a movie trailer, focusing on powerful imagery like heavy military weaponry and tank cannons aimed at a complex filled with women and children. But as we know, the people inside that complex were heavily armed as well, which is what drew the attention of the FBI and ATF. Getting some insight on a true-life story (even if it’s dramatized) should make for another compelling miniseries. Here’s hoping.

During the past 10 years, the crop of DC Universe Animated Original Movies has been inconsistent. Some have been very good, while others have been mediocre adaptations of their comic book source material. Warner Brothers Animation has been ambitious, however, releasing 30 films through the past decade (which are now collected in a box set) and bringing some beloved comic book storylines to animated life.

One story that fans have been waiting to see is the first “Elseworlds” story (in which creators use familiar characters in alternate storylines and historical circumstances), “Batman: Gotham by Gaslight.” Originally created by Brian Augustyn and Mike Mignola, the premise is rather straightforward: What if Bruce Wayne and Batman existed in Victorian England when Jack the Ripper was on his killing spree?

“Batman: Gotham by Gaslight” gets a digital release on Jan. 24 and is available on Blu-ray and DVD Feb. 6.