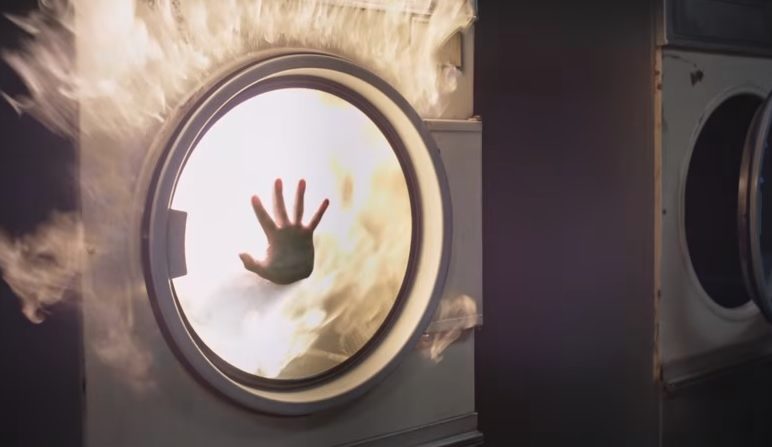 This was already going to be a big week for trailers with the final look at Justice League. Then Star Wars swooped in and took most of the buzz that Batman and his super friends would have generated. But that provided a fun 1-2 punch on Sunday and Monday for movie fans. And the end of the week with Friday the 13th brought some surprises, as well.

The New Mutants is presumably a spinoff from the X-Men movies. But director Josh Boone (The Fault in Our Stars) said all along that this story featuring a new group of teenagers with extraordinary abilities would be more of a horror movie than a conventional superhero film.

That was confirmed with the first New Mutants trailer. No superpowers. No costumes. No hint of their comic book inspiration, particularly the “Demon Bear” storyline this movie is reportedly based on. No sign of any connection to the X-Men, other than the mention of the word “mutants.” We see teenagers kept in what looks like an asylum, studied and experimented upon by a doctor (Alice Braga) whose intentions are unclear.

But if the idea was to convey that this is a very different kind of superhero movie, this trailer definitely accomplishes that objective. Comic book superhero movies aren’t their own genre. Many different types of stories can be incorporated into that space: Crime thrillers, sci-fi, heists, espionage, fantasy, comedy and as we see here, horror.

Subsequent previews will surely show what talents these characters have. They can fly, create illusions, teleport, channel solar power — one of them can even transform into a wolf. Viewers may have recognized Maisie Williams (Game of Thrones) and Anya Taylor-Joy (Split), and maybe they’ll be showcased more in future trailers. Selling The New Mutants as a horror movie is clever (and probably accurate), but it’ll be intriguing to see how producers pull in superhero fans from here.

This time around, we get a real trailer that portrays Ryan as a boring CIA analyst who is suddenly pushed into the field as a result of what he discovers. And there’s Wendell Pierce (The Wire) as Ryan’s supervisor, who will probably get a lot of great lines. Hopefully, there’s some good action in this series too.

For a series as popular as The X-Files has been, the trailer for a new season — which debuted at New York Comic Con — didn’t seem to generate much buzz. Maybe that’s because the Season 10 revival was inconsistent, and just flat-out bad at times. But if creator Chris Carter is interested in further developing the story of the series, Season 11 could be worth watching.

It appears that Mulder and Scully’s son, William, will be part of the narrative in the upcoming season. Will an alien toxin wipe out humanity? Will Mulder finally kill Cigarette Smoking Man? Is this really going to be the end of The X-Files? Or will Carter continue to show that he really doesn’t have anything new to offer?

Stephen King adaptations have been hit and miss this year with The Dark Tower and It. But maybe his work is better suited for television. Hulu had some moderate success with last year’s 11.22.63, but Castle Rock looks more ambitious and creepy. It also has J.J. Abrams’ creative power behind it, which is reflected in this trailer.

Is this kind of Abrams’ tribute to King and the many wonderful stories he’s created? Shawshank State Prison is referenced at least a couple of times in the trailer, which seemingly indicates a sort of Stephen King universe for this series. A cast with Andre Holland (Moonlight), Sissy Spacek, Scott Glenn (The Leftovers) and Bill Skarsgard (It) also looks promising.

Friday the 13th provided two fun horror-type trailers between The New Mutants and the final trailer for Season 2 of Netflix’s Stranger Things. Taking place one year after the first season, Will (Noah Schnapp) has returned from the upside down and everyone wonders where he disappeared to. Yet no one believes his story, except family and friends. And Eleven. It’s fun to see the whole gang return.

Season 2 is keeping alive the 1980s nostalgia that makes Stranger Things so enjoyable with references to Ghostbusters and The Lost Boys. If you missed out on what everyone was talking about last summer, you have two weeks to catch up on Season 1 before the new season premieres on Oct. 27. Don’t be left out of the fun this time around!

The new Star Wars trailer got plenty of hype, making its debut during halftime of Monday Night Football, and our final look at The Last Jedi most certainly didn’t disappoint. This had a darker edge to it, emulating The Empire Strikes Back in the new Star Wars trilogy.

Kylo Ren has gone further down the path of the Dark Side after killing his father and appears ready to corrupt Rey as she progresses in her Jedi training with Luke Skywalker. Will Luke lose Rey to the Dark Side, as he did with Han and Leia’s son? Will those cute Porgs save us with cuteness and joy?

The final Justice League trailer is here to convince those who feel the DC Comics movies have been too dark that there’s space for hope, optimism and fun in this cinematic universe. These are heroes who have to become super friends fighting together to save the world.

We get smiles from Wonder Woman and The Flash, and Aquaman is having a great time impaling bad guys with his trident. Even Bruce Wayne has a moment of fun with Barry Allen at the end of the trailer, even if he’s rolling his eyes at his younger teammate’s enthusiasm. Most importantly, Superman is set to return. How that happens may be the biggest mystery going into this movie. Hopefully, that reveal pays off.

This isn’t so much a trailer as a TV ad, but there’s some new footage that hasn’t been shown before. Best of all, we continue to see the comedic tone established by director Taika Waititi that Thor: Ragnarok carries throughout the film.

The rivalry between Thor and Hulk over who’s the strongest Avenger provides plenty of laughs, thanks largely to Chris Hemsworth and Mark Ruffalo. There might not be a more fun superhero film this year. (Though Spider-Man: Homecoming would probably take issue with that.)

Another clip from Thor: Ragnarok debuted this week with Hemsworth’s appearance on Jimmy Kimmel Live. Waititi himself brings more laughs as the rocky alien Korg, who thinks Thor’s relationship with his lost hammer Mjolnir sounds just a bit too close.