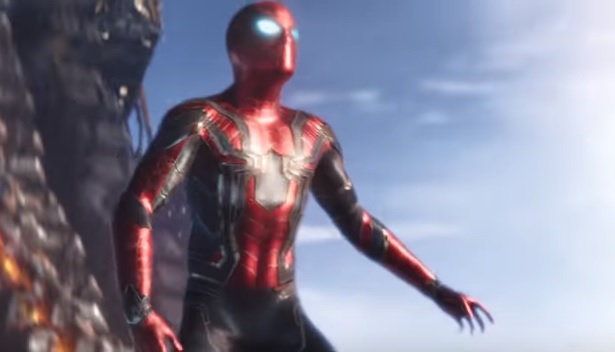 This week, we see how fast Ridley Scott really was able to replace Kevin Spacey with Christopher Plummer in a film that’s being released in a few weeks, get a peek at the long-awaited Andre the Giant documentary, and have our first look at a blockbuster comic book crossover come to life with the next Avengers movie.

Sony made a very bold decision in light of Kevin Spacey’s sexual misconduct scandals to cut the actor out of All the Money in the World and replace him with Christopher Plummer in the role of billionaire J. Paul Getty. Reshoots for the movie just finished this week.

This new trailer gives us the first look at Plummer in the role, but it’s also a very different preview which plays up the thriller aspects of the story and emphasizes the badassery of Mark Wahlberg’s character, a former CIA operative who acts as Getty’s business manager. But Plummer looks like pure greedy villainy in what’s shown here (and maybe better than Spacey under layers of makeup and prosthetics). Will people be more or less curious about this movie with Spacey cut out?

HBO’s Andre the Giant documentary has been rumored for years, the signature project of Bill Simmons’ partnership with the premium cable network. Simmons’s star has since been diminished, with his Any Given Wednesday show cancelled, but his “ultimate unicorn” project with director Jason Hehir is finally close to making its debut.

Expectations will be pretty high, given the hype surrounding the film, Andre the Giant’s beloved pop culture status (along with the popularity of pro wrestling), and Simmons’s desire to show that he can make quality sports documentaries away from ESPN’s 30 for 30 brand. This used to be HBO’s territory, and critical and fan acclaim could help the network regain that status.

What happens when London’s favorite bear is accused of a robbery he didn’t commit? That’s the primary story for Paddington 2, the sequel to 2014’s pleasantly surprising hit adaptation of the popular children’s books. Hugh Grant is the dastardly villain whose theft frames Paddington (voiced by Ben Whishaw) and puts him in prison, while Hugh Bonneville and Sally Hawkins return as Henry and Mary Brown, the parents who take the bear in and adopt him as one of their own.

Director Paul King seems to be influenced by Wes Anderson for many of his shots and scenery, which is a good blueprint to follow since Anderson’s films often look like storybooks. The first Paddington was enjoyable for kids and adults, and judging b this trailer, the sequel should be just as much fun with a little more excitement.

This second trailer for 12 Strong is less somber than the first preview and more inspirational. The first Special Forces team sent into Afghanistan after the Sept. 11 attacks is naturally motivated to avenge those who were killed and bring some sense of justice to those events. But the soldiers (including Chris Hemsworth, Michael Shannon and Michael Pena) among them also want to get back to the families they left back at home.

Drawing from the playbook established by Lone Survivor and 13 Hours, 12 Strong appears to lean heavily on the camaraderie between the men in that tight-knit unit, their sense of duty, and ambition for justice. But the angle of those soldiers having to take on the Taliban with a much smaller fighting force and traveling on horseback — in addition to learning  on the fly how to fight on the enemy’s home field on foreign terrain — could make for an even more compelling story.

Joaquin Phoenix as Jesus Christ will certainly raise a few eyebrows and attract some attention to this film. But telling the story of Jesus and the crucifixion largely from the view of Mary Magdalene is a different angle from the many previous dramatizations.

With a cast including Phoenix, Rooney Mara as Mary Magadlene and Chiwetel Ejiofor as Peter, and directed by Garth Davis — whose last film, Lion, earned an Academy Award Best Picture nomination — this should be a compelling retelling of a story familiar to so many. How the script portrays the relationship between Jesus and Mary could determine how this movie is viewed by audiences and critics.

At first glance, a documentary about the final year of Barack Obama’s administration could be a nostalgia trip for those yearning for the much calmer, more reasoned term of the previous presidency. Obviously, those who wanted change and support the Trump administration will want no such part of this film.

Nonetheless, The Final Year appears to be a compelling look at what the Obama administration dealt with in its last 12 months, notably the crisis in Syria and the 2016 presidential election. Judging from the trailer, there seems to be less access to President Obama than to those surrounding him, such as Secretary of State John Kerry, United Nations ambassador Samantha Power and Ben Rhodes, deputy national security adviser for strategic communications.

The first trailer for Marvel’s latest blockbuster — which should be the blockiest of busters yet from the studio — did not disappoint, providing plenty of visual treats, intriguing hints to the story and a solemn tone that indicates the dramatic stakes have never been higher for Earth’s mightiest heroes.

As any good trailer should, this Avengers: Infinity War presents more questions than answers. How does cosmic villain Thanos (Josh Brolin) finally make his big play? Where has Captain America been? (And is he going to get his shield back?_ Why did Black Widow dye her hair? When did Vision become more human? And is one of our favorite heroes going to die in this massive conflict?

Somehow, Marvel manages to keep topping itself when they bring its whole gang of superheroes together. We had a lot of fun with the comedy in Spider-Man: Homecoming and Thor: Ragnarok, but it looks like things will be getting very dire and serious in the Marvel cinematic universe in May.