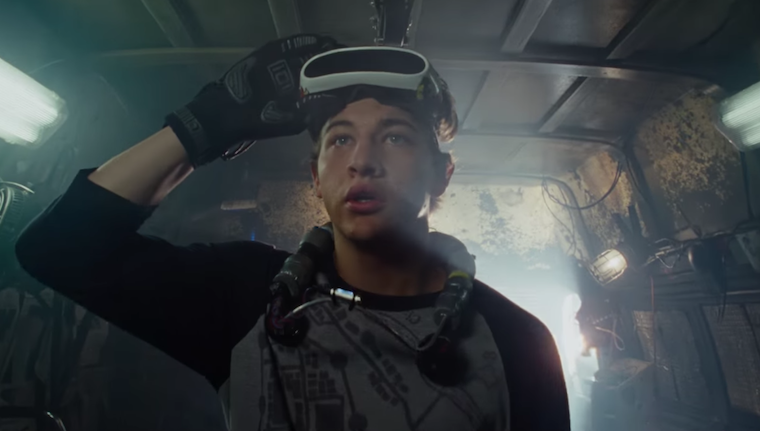 We love trailers here at The Comeback. Sometimes, they’re better than the movies or TV shows they’re intended to promote. We try to cover the best of them, big and small, in our coverage during any given week. But we can’t always get to all of them among the week’s sports and culture news.

This week, more pop culture nods from Ready Player One, soldiers play themselves for Clint Eastwood, and a Woody Woodpecker movie that no one was asking to see. And because it was kind of a thin week for trailers, we play some catch-up with three trailers that we missed when they were initially released, including a Batman movie unlike any we’ve seen.

Here are the best movie and TV trailers from the past seven days (with links to those we wrote up earlier) and a handful that we overlooked in weeks past:

For trailer fans and moviegoers who may not be familiar with Ernest Cline’s source novel, this second trailer for Ready Player One explains the story much better than the first preview did. But that initial trailer had to explain the premise of a future in which the most popular source of entertainment is a virtual reality called The Oasis and introduce the main character, Wade Watts (Tye Sheridan).

This time around, we find out the driving force of the narrative: the game’s creator (played by Steven Spielberg favorite Mark Rylance) has hidden an easter egg and a player who finds it will win half a trillion dollars. We also get to see Watts’s avatar, Parzival, for the first time. But this thing really hits when Van Halen’s “Jump” kicks in, right? Just to put on a fine point on the 1980s nostalgia that permeates Ready Player One.

The true fun of these trailers and what might make this movie a bigger hit on video is all of the pop culture easter eggs and references in the background. A first glance catches RoboCop, the Tron cycles, Joker and Harley Quinn, the 1966 Batmobile and the DeLorean from Back to the Future. Others have surely noticed plenty more.

Clint Eastwood solved the dilemma of finding actors to play the three American soldiers who stopped a 2015 terrorist attack on a French train for his movie about the incident. He cast the real-life soldiers — Anthony Sadler, Alek Skarlatos and Spencer Stone — to play themselves in The 15:17 to Paris. How many other directors besides Eastwood have gotten away with a bold, yet perhaps questionable choice?

It’s hard to tell from this trailer whether or not Eastwood’s decision is the right one. Maybe having Sadler, Skarlatos and Stone play themselves will give kind of a documentary feel to the movie. But it also looks like at least some of this story will be told in flashback, following the lives of these three as they grew up and developed their friendship.

Eastwood and his longtime cinematographer Tom Stern shoot those pivotal scenes like an action thriller, based on what’s shown here. That, along with a story that doesn’t ask too much of the acting newbies, might help his stars look better.

Right now, the behind-the-scenes story of Annihilation is taking precedence over the movie itself. The sci-fi tale of a scientist (Natalie Portman) who takes a group of soldiers into an environmental contamination zone to find out what happened to her husband (Oscar Isaac) and perhaps make contact with an alien life form was deemed “too intellectual” by one of its producers. Additionally, there was criticism that Portman’s character (or performance) wasn’t sympathetic enough.

According to the Hollywood Reporter‘s Borys Kit, director Alex Garland has the support of the movie’s executive producer, powerhouse Scott Rudin, so there probably won’t be a lot of editorial interference that’s affected recent blockbuster films like Suicide Squad, Rogue One and Justice League. But those concerns will apparently result in Annihilation playing on Netflix for international audiences, rather than getting a theatrical release, which will obviously affect its box office.

So is this a brainy sci-fi movie or maybe a horror film with sci-fi elements? If it’s anything like Garland’s last film, Ex Machina, the movie will be good enough that those questions won’t matter.

Old cartoons adapted into live-action movies haven’t done so well. Or maybe you saw Yogi Bear and liked it. The Adventures of Rocky and Bullwinkle was kind of fun. And kids apparently liked Alvin and the Chipmunks.

Fortunately for everyone, this live-action Woody Woodpecker (except for the badly animated title character) is a direct-to-video release. This looks awful. And is that really a bird poop gag?

What’s most disappointing is that I wanted to find a clip of Phil Hartman as Frank Sinatra singing the Woody Woodpecker song on a Saturday Night Live skit. For now, Hartman pointing at the camera and saying “Pecker song” is left to cherished memory.

No, this isn’t a new Black Panther trailer, per se. But it’s a new international trailer that includes new footage that the U.S. trailer didn’t have, particularly with Michael B. Jordan’s Erik Killmonger character.

What’s also intriguing is that, other than some sci-fi elements with the technologically advanced nation of Wakanda, most of this preview makes King T’Challa (Chadwick Boseman) look like a badass African James Bond. Even once T’Challa dons the Black Panther suit, this doesn’t look like a standard superhero movie.

A Wrinkle in Time – March 9

The first trailer for A Wrinkle in Time focused more on Chris Pine’s character, likely because he’s the recognizable star who can be marketed to audiences. But this second preview puts the main character, young Meg Murry (Stone Reid), front and center which should help this movie reach children who can relate to its hero.

And for those who aren’t familiar with Madeleine L’Engle’s acclaimed sci-fi novel, the concept is explained as well. Murry’s father (Pine) discovered something like a wormhole — or “more like a wrinkle” — and has disappeared. So she and some friends travel time, visiting several strange worlds and meeting Oprah Winfrey, Reese Witherspoon, Zach Galifianakis and Mindy Kaling along the way.

Seriously, though, this looks like it could be a fantastic visual experience on the big screen — maybe even worthy of 3D and IMAX viewing.

Nobody is going to say this Batman movie looks like all of the previous treatments. Batman Ninja is a Japanese anime interpretation of Batman, but also incorporates elements of samurai mythology and feudal Japan as the Dark Knight is transported back in time to battle The Joker.

A whole bunch of other characters from the Batman and DC Comics universe are part of the story. The trailer reveals allies like Robin, Nightwing, Alfred and Catwoman, along with adversaries such as Two-Face, Penguin, Poison Ivy and Deathstroke. And what the hell is that giant threat at the end? A giant robot? No subtitles necessary to convey how cool all of this is.

That might be as much as anyone should attempt to explain this movie because it looks like it has to be seen to be believed. Say what you will about DC’s live-action superhero films, but their animated product has often been daring and extremely well-made. Here is a teaser that was shown during New York Comic Con back in October that has some additional footage:

Considering how much we keep track of and write about trailers, it doesn’t seem possible that we missed this one for Isle of Dogs when it was released back in September. Maybe you’re more on the ball than we are. I saw it for the first time a couple of weeks ago before Three Billboards Outside Ebbing, Missouri. And even an older audience seemed extremely impressed by what they saw.

Wes Anderson’s second stop-motion animated film, following Fantastic Mr. Fox, looks truly spectacular. Anderson was already a filmmaker whose every frame looked like a framed work of art. That holds especially true in animation. Even with talking dogs, this very much looks like a Wes Anderson film — with maybe a little bit of Stanley Kubrick Dr. Strangelove mixed in. The voice work by the cast, led by Bryan Cranston, Greta Gerwig and Edward Norton, gives these characters so much life.

Comfortable with stop-motion animation, Anderson appears to have taken the form even further here. And unlike Fantastic Mr. Fox, this is a completely original story (in more ways than one). Isle of Dogs has to be one of the most anticipated films of next year.