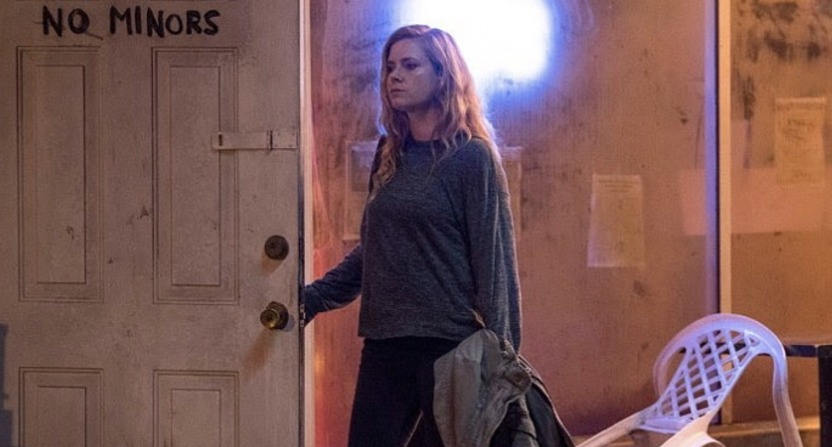 Trailers! We have a deep love of them here at The Comeback. Sometimes, these previews better than the movies or TV shows they’re promoting. But a good trailer is also a form of entertainment all by itself.

The big trailer release of the week was Venom, which finally gave us a look at the title character in all of its monstrous splendor. We covered that in a separate post, however, so this compilation is devoted to the other trailers that debuted this week. Fans of Gone Girl and Amy Adams have a new HBO miniseries to look forward to. Those who enjoyed the novel Crazy Rich Asians get a first look at a movie adaptation.

This week included some big trailers with the final looks at Deadpool 2 (along with a new character who’s sure to be popular) and Jurassic World: Fallen Kingdom prior to the many, many TV spots to come over the next few weeks, Denzel Washington beating everybody up because they messed with him, and a movie that feels like it’s ripping off a John Wick premise. And if you’re into movie anniversaries, a sci-fi classic is now 50 years old.

HBO has adapted another novel from Gone Girl author Gillian Flynn into a new miniseries. This teaser for Sharp Objects touts the talent behind the camera, such as Blumhouse Productions, which produced recent horror hits like Get Out. Additionally, Jean-Marc Vallée will direct every episode, as he did with Big Little Lies.

There’s also plenty of talent in front of the camera, notably star Amy Adams who’s joined by Patricia Clarkson and Sophia Lillis (It), who is a great choice to play a younger Adams. (Should Adams be playing an older Beverly in the It sequel, instead of Jessica Chastain?)

Adams plays reporter Camille Preaker, who returns to her hometown to investigate the murder of two young girls. Oh, Preaker just finished a stay at a psychiatric hospital as well. But going home means she’ll also face the mother she hasn’t spoken to in years, and the half-sister she barely knows. The murdered girls also remind Preaker of her own life.

More Constance Wu, please! ABC’s Fresh Off the Boat is reportedly on the bubble for cancellation, which could presumably free up Wu and co-star Randall Park for more movie roles. But having Asian representation on TV is important, and the same could be said for Crazy Rich Asians.

Based on Kevin Kwan’s popular novel, a story about someone fighting the perception of a disapproving parent is a universal tale, one that’s been told in a number of romantic and family comedies. The setting of Crazy Rich Asians and the enormously wealthy Young family in Singapore puts that narrative in a setting (with a little bit of The Bachelor sprinkled in) that hasn’t been shown much on screen before.

What a great idea for allergy season! Something in the air could kill you. Actually, it’s the rain that could kill you. (Maybe we’ll get another series someday called “The Pollen.”) The Rain is the first Danish original series for Netflix, continuing a trend of foreign language series on the streaming provider (and competitors like Amazon and Hulu).

This one being a young adult series potentially taps into a different audience for Netflix, though people of all ages know this is a place to find darker sci-fi these days.

Here’s another example of darker sci-fi on Netflix, though this is a film instead of a TV series. It’s good to see Clive Owen doing something besides commercials for SAP, even if those ads raise his profile along with prompting questions like “Why isn’t Clive Owen doing movies these days?”

I’m not sure the trailer for Anon explains the concept entirely well. But maybe that’s a good thing, creating enough curiosity and intrigue to compel people to watch. Does this movie have something to say about concerns over social media and companies monitoring our data and violating our privacy? Or are those issues just a delivery system for a standard thriller?

Owen having his eyes hacked might be an amusing reference for longtime fans of the actor who remember him from the BBC series Second Sight, in which he played a detective slowly going blind.

Here’s some sci-fi that will be in theaters, instead of Netflix. Kin looks like some potentially fun wish fulfillment. Who wouldn’t have wanted to be a kid that stumbled upon some cool alien or futuristic technology, then get to use some of those weapons against bullies and bad guys?

Then there’s the question of what sent that technology to our time/dimension/planet and whether or not someone is coming for it. Mix in some family drama about an ex-con returning home to bond with his brother and there’s quite a bit going on in this movie, which is certainly intriguing.

Is 2001: A Space Odyssey really 50 years old? The film seems so timeless and influential on so many sci-fi movies (most recently, Interstellar) during the past few decades that it just doesn’t feel that old. The computer HAL almost being a precursor to the role that Siri and Alexa increasingly play in our lives also gives 2001 resonance.

Cutting a new trailer for a 50th anniversary showing of Stanley Kubrick’s visionary film makes it feel as vital as ever. Many of the visuals and special effects hold up extremely well so many years later.

Not everyone will be able to watch the 70mm re-release of 2001, which is likely true for most of the country. But if you get a chance to see this on the big screen, you absolutely should. Maybe an anniversary Blu-ray is soon to come, though there’s been no word of such a release.