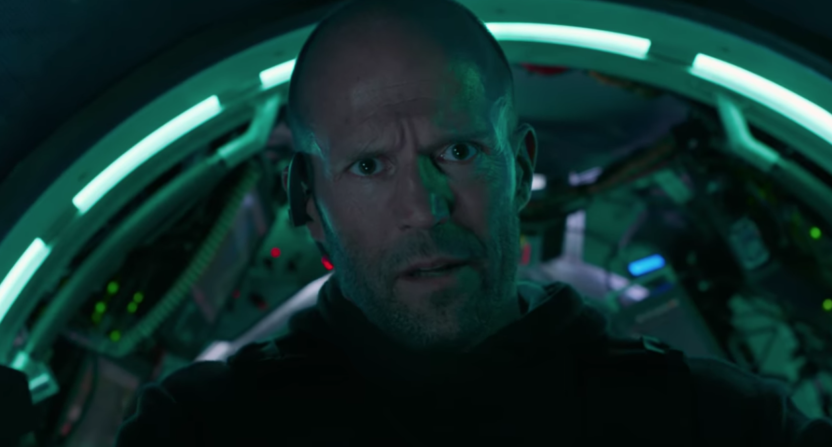 Trailers are one of our favorite things here at The Comeback. Sometimes, these previews better than the movies or TV shows they’re promoting. But a good trailer is also a form of entertainment all by itself.

We already covered the new Solo: A Star Wars Story trailer in a separate post, but this week also included a new look at The Incredibles 2, Jason Statham taking on a giant shark, Jim Carrey going dark and Anne Hathaway just asking to have a diamond necklace snatched from her neck.

The previous trailer and teaser released for The Incredibles 2 revealed the surprise of Baby Jack’s myriad superpowers and the premise of Elasti-Girl running covert superhero operations while Mr. Incredible stays home to take care of the kids.

But with this new trailer, we’re reminded of what made the first Incredibles movie so appealing: Ultimately, this is a story about a family. They just happen to be superheroes. (It’s why many fans think The Incredibles is essentially the best Fantastic Four movie that’s ever been made.) The opening scene shows that so well with Violet nagging Dash, and Dash hating that his mother ordered all vegetables.

We’re also introduced to Winston Deavor, the telecom exec who wants to bring “supers” back and zeroes in on Elasti-Girl as the best PR face of that movement, and Screen Slaver, presumably the big bad guy of this story with the scary Bane-like mask. That gets the rest of our heroes back into action — that is, if Frozone’s wife lets him.

“My god… it’s a Megalodon.” This may be the best movie line of the summer (let’s hope not), but we won’t see it — and Jason Statham’s intense delivery — on the big screen until August.

The first trailer for The Meg starts off strong with a young girl in an underwater research station being eyed as dinner by a giant shark. It’s a fantastic visual, one that the rest of the film hopefully lives up to. (The sequence with the giant squid attacking the mini-submarine looks promising.) Everyone on the coast of the South China Sea, get out of the water!

But come on, is the shark too big? How much does that thing have to eat to get full? How many torpedoes does Statham have to pump in its belly? Or will Statham kill it from the inside with a knife and his own bare hands?

The new trailer for Ocean’s 8 isn’t as good as the first one, which introduced each member for Debbie Ocean’s crew and provided a quick glimpse of their characters. Here, we begin with Anne Hathaway’s vapid Daphne Kluger and James Corden telling her about Daniel Ocean’s sister and the love of big-time theft that runs in the family.

So the trailer is more about the job, demonstrating along the way that we probably won’t mind seeing Kluger losing the diamond necklace that she’s so eager to wear around her neck. Is there a connection between Ocean and Kluger, some kind of grudge that fuels the five-year planning of this heist?

And will Rihanna or Mindy Kaling be the unsung standout of this cast?

From one heist to another, American Animals and its cast of young stars — Barry Keoghan, Evan Peters and Blake Jenner — drew positive reviews at the Sundance Film Festival. One notable aspect of the film’s production is that MoviePass acquired it for distribution.

The film is based on a true story of Kentucky teenagers who attempt to valuable Audubon prints and rare books from the Translyvania University library. The disguises they wear look like they came straight from the Beastie Boys’ “Sabotage” video. We’ll see if the movie has anything to say about white privilege and bored white kids, but for what it’s worth, the quartet didn’t think its plan all the way through when it came to trying to sell off what was stolen.

Raise your hand if you expected Jim Carrey to return to the big screen in a dark, indie thriller set in Poland about a murder which resembles a crime that took place in a novel. (Naturally, the author is the top suspect.) Carrey plays the lead detective on the case and based on the trailer, he gets way too deep into the investigation, discovering things he probably shouldn’t have while also tapping into a darker side of himself.

Carrey has been looking to do play more serious roles for quite some time. Hopefully, audiences are ready to embrace that. Although Dark Crimes won’t be a widely released film — and those who see it might end up doing so as a digital video release — seeing Carrey in a different type of role could be very intriguing.

Timothée Chalamet is surely bound for stardom after his breakout role in Call Me By Your Name (along with smaller roles during the past year in Lady Bird and Hostiles). Hot Summer Nights could boost him even further, even though the movie has a title that sounds like an 80s sex comedy.

This is a very different coming-of-age story than Call Me By Your Name, with Chalamet’s character getting involved in the weed trade while spending a summer in Cape Cod. Along the way, he gets a crush on the dealer’s sister, played by Maika Monroe (who needs a good role after It Follows). Judging by the trailer, this has a Boogie Nights vibe, though appears to go in a more sinister direction.

What is Emily Ratajkowski hiding? According to the trailer for In Darkness, her character, Veronique, is the daughter of a war criminal who commits suicide — or did she? She also slipped something to Sofia, an innocent blind pianist played by Natalie Dormer. (Dormer also co-wrote the film with director Anthony Byrne.) Shortly thereafter, she heard something involving her upstairs neighbor — but what?

There may also be more to Sofia’s story, which makes her interesting to the Russian mafia for reasons other than whatever she’s safekeeping. Is Ed Skrein’s character a detective or a hitman (probably the latter) and how weird is it to see him with a full head of hair? Is that a weird takeaway from a trailer that features Natalie Dormer and Emily Ratajkowski?

Natalie Dormer isn’t the only Game of Thrones star popping up in a new movie. Maisie Williams is part of the cast for Mary Shelley, a thriller about the author of Frankenstein. Elle Fanning plays the title character, who becomes involved in a romance with poet Percy Shelley while also learning something about bringing the dead back to life.

That fuels an interest which inspires her famous story, written as an entry in a short story competition held by Lord Byron. Naturally, Shelley is underestimated as a woman, considered incapable of writing a ghost story. (Hey, to be fair, Frankenstein isn’t a ghost story. She ended up essentially creating science fiction instead.)

A gothic romance that also serves as a biography for one of literature’s most famous authors? Hopefully, Mary Shelley pulls that story off well.