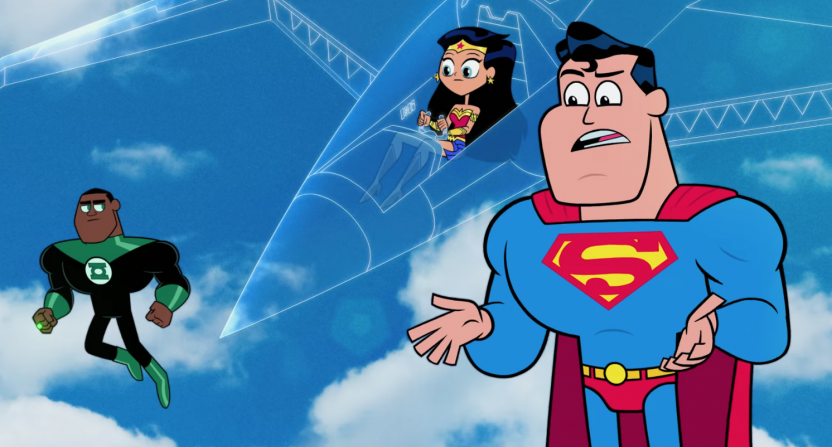 We have a deep love for trailers here at The Comeback. Sometimes, these previews better than the movies or TV shows they’re promoting. But a good trailer is also a form of entertainment all by itself.

Ant-Man and The Wasp was the headlining trailer release of the week, which we covered in a separate post. But there were several other previews released this week that should pique curiosity, such as an animated superhero spoof that’s sure to entertain kids and superhero movie fans alike. And there’s also a new Robin Hood movie coming up, as if that story hasn’t been told repeatedly. But maybe this new one will be the one. Check back in five years or so.

Deadpool 2 will make plenty of fun of superhero movies — especially those in the X-Men universe — and tropes associated with the genre. But Teen Titans GO! to the Movies could get away with even more. (And subversively so, since it’s an animated film.)

As badly as Warner Brothers and DC Films have handled the DC Extended Universe with Batman v Superman and Justice League, the jokes shown in this Teen Titans GO! trailer show that the studio apparently isn’t taking itself too seriously. Or at least, WB has realized there’s some currency at self-deprecating humor — especially with jokes that reference stumbles of the past.

Nicolas Cage — who almost portrayed the Man of Steel in a 1998 film — providing the voice for Superman is the kind of thing fans will eat up. And there appear to be plenty of visual references that should make this fun to watch both in the theater and on video. (Why is cowboy anti-hero Jonah Hex in the background of a scene, for instance?) But is there going to be any reference to Cyborg also being in the disappointing Justice League live-action movie?

Everybody’s going to say this, but we’re going to pile on as well: Do we really need another Robin Hood movie? The last one was eight years ago with Russell Crowe in the title role. Do you even remember that one? (I remember missing it in theaters and every time I see “Robin Hood” on my cable listings, I’m disappointed it’s not the Russell Crowe version. It’s almost always the 1991 Patrick Bergin version which also has Uma Thurman in it.)

What makes this new version different? Insert shrug emoji here. The teaser trailer accentuates the physics-defying stunts featuring Hood firing as many arrows from many different positions while airborne. Arrow and Hawkeye have made archery cool again. (Maybe Lara Croft has helped with that too.)

Maybe the most intriguing aspect of yet another retelling is Jamie Foxx playing Little John, Robin Hood’s right-hand man and leader of the Merry Men. Taron Egerton has shown leading man potential in the Kingsman movies and Eddie the Eagle. But with a cast including Foxx, Jamie Dornan and Ben Mendelsohn (as the Sheriff of Nottingham, of course), Egerton probably won’t have to carry the film.

Hopefully, this does a better job of modernizing a mythological hero and starting a franchise than last year’s King Arthur did.

Two years after news of The Catcher Was a Spy being adapted from a book into a movie, we have a trailer. Reviews from the Sundance Film Festival were mixed, but maybe some audiences and critics were confused as to whether or not this was sort of a sports movie or a straight true-life espionage thriller.

Based on this trailer, it looks like we’re getting the spy thriller (and a war movie). That’s appropriate since Moe Berg wasn’t a baseball player of much note, though he did stick in the majors for 15 years as a backup catcher (five of them with the Boston Red Sox). Hopefully, people give Paul Rudd a chance in a drama. Berg’s story and his role in World War II is utterly fascinating.

This trailer for A Simple Favor is very much a teaser, revealing very little about its story. But it certainly sells its two stars, Blake Lively and Anna Kendrick. This looks like a drama, rather than a comedy, but that shouldn’t be a surprise. Kendrick, especially, has been known for comedies in recent years, but Lively has been in dramas and thrillers.

Considering that the movie is directed by Paul Feig (Spy, Ghostbusters), you might still expect a comedy. Yet after all the ugly fanboy outrage and backlash he had to deal with in making the female-led Ghostbusters, maybe a story about someone disappearing is extremely appealing.

Initially, the story seems like it might be going in a Single White Female or Ingrid Goes West direction, with someone envying a more successful, glamorous friend and wanting to take over her life. But the trailer soon indicates that this is a different kind of story, with Lively’s character wanting to escape what seems like a enviable life. What is she running from?

The original 1972 Super Fly movie is probably better known for its music, with a soundtrack written and produced by Curtis Mayfield. That raises the bar high for Future, who’s putting together the new soundtrack. (The rapper is also a co-producer for the film.)

This remake (reboot?) moves the story from Harlem to Atlanta (and Mexico), and features relatively unknown Trevor Jackson (and some fantastic hair) as the main character, Youngblood Priest. But Jason Mitchell (Straight Outta Compton) as his partner Eddie and Michael K. Williams as Scatter, Priest’s mentor, should make this movie worth watching.

Made by music video helmer Director X, the action should look great (and what’s shown in the trailer is impressive). But will this new Superfly be as fun as the original?

Whether or not you were a fan of Whitney Houston’s music, she was a significant presence in pop music from the late 1980s to mid-1990s. Following the peak of her music career, she appeared to have a promising future as an actress, appearing in Waiting to Exhale and The Preacher’s Wife. (Acting-wise, she’s probably best known for The Bodyguard, the soundtrack of which also provided her biggest hit, “I Will Always Love You.”)

Houston should have eased into a respected career as one of the best singers of a generation, lasting at least as long as a Lena Horne or Diana Ross. Imagine how she would rule Las Vegas with a residency like Celine Dion or Mariah Carey currently enjoy. She probably could have done that for the rest of her life. Unfortunately, Houston’s story had a tragic ending, fueled by her marriage to Bobby Brown and a downward spiral into drug abuse.

(Personally, I remember being in Southeast Asia when Houston died in 2012. That was even big news in Malaysia, which indicates what a global pop icon she was.)

This documentary is approved by Houston’s estate, so maybe it won’t be as hard a look as her story might warrant. But director Kevin McDonald (The Last King of Scotland) isn’t a filmmaking pushover either, so maybe this will be a definitive look at Whitney Houston’s career and life.

The true-life story of crime boss John Gotti certainly seems like it would make a good movie. But will this be it? John Travolta hasn’t had a great role in a very long time (even as Robert Shapiro in The People vs. O.J. Simpson, he was mediocre), but maybe a big, showy leading man role as one of modern crime’s most infamous figures will lift him.

Here’s an interesting note about Gotti: It’s directed by Kevin Connolly, Eric from Entourage. That really says nothing as to whether or not this will be a good movie, of course. The production has been bumpy, with different actors circulating through the cast for years, and distribution has even been a problem. Hopefully, this is better than the HBO made-for-TV version from 1996 (with Armand Assante as Gotti).