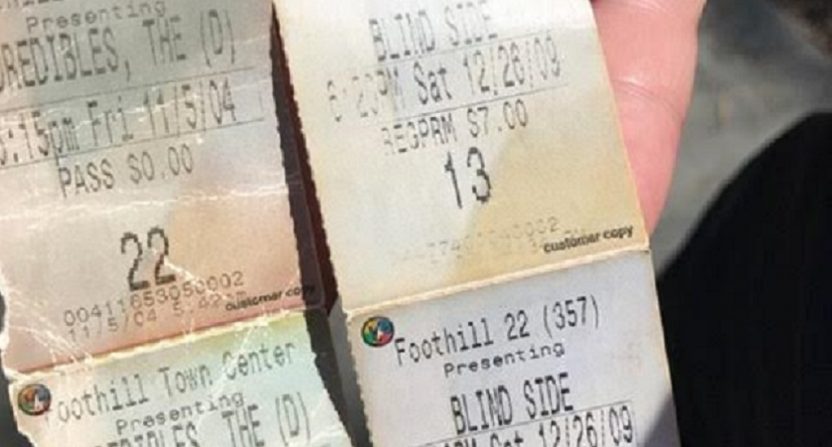 At the end of March I visited Lake Forest, California. If you’re wondering how a town in Orange County got the name Lake Forest, as I was, it turns out there was a public vote to decide the matter in 2000.

Here’s some information on the lakes:

It has two man-made lakes identified by the clubhouses on the lakes — the Beach and Tennis Club (Hidden Lakes, formerly Lake I) and the Sun and Sail Club (Lake II).

There’s also a bit of forest, comprised of eucalyptus. If you look on Google Earth, you can’t miss it, as it’s the only densely green area of the city. It’s not a massive forest, but there are several parks and neighborhoods with interconnected trails that wind throughout, and on a beautiful spring day (temperatures in the 70s and 80s, which was a heavenly escape from Indiana) my girlfriend and I were enjoying a walk through one such park.

We were pausing to decide which fork in the trail to take when I noticed, right in the middle of the concrete path, some movie theater ticket stubs. I’m always curious about ticket stubs, though normally just my own, found in a jacket pocket or a drawer. So I bent down to check these out, thinking at the very least I’d throw them away.

And then I saw which movies they were, and, well: 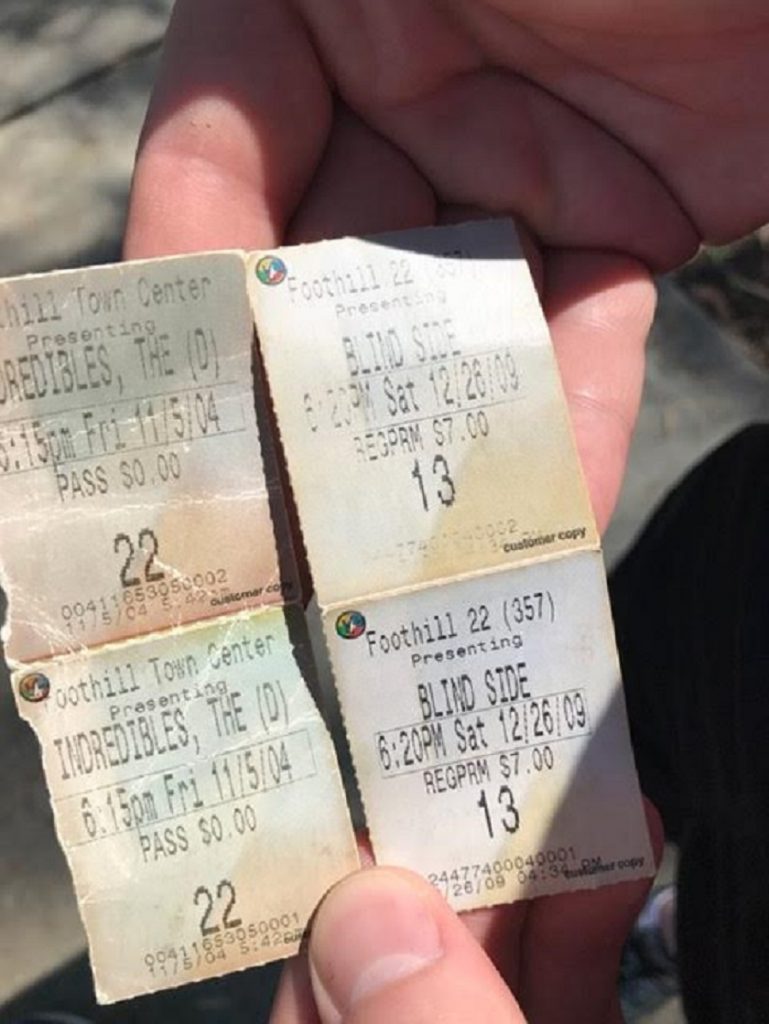 What in the world? I was probably more surprised in the moment than I should have been, considering they’re just ticket stubs, after all, but come on. The Incredibles and The Blind Side?

Here are a few thoughts:

@jayrigdon5 While I enjoyed this very much, I have to deduct points for ignoring that the ticket read “Indredibles”

Right after I took that picture, which was about two minutes after I noticed them and picked them up, I threw them into the aforementioned trash can, and we continued our walk. As I turned back from the trash can, I noticed a guy on the path behind us, maybe a hundred yards or so back. There were multiple twists, turns, and forks in the trail between us, but there weren’t many people out there at all, so I took notice.

As we walked, I kind of checked back a few times, discreetly, and saw he’d stayed on our exact path, and was gaining, despite our brisk pace. I didn’t say anything, for fear of paranoia, but after he’d closed to within about twenty yards, my girlfriend said she was going to call her mom, and proceeded to do so, loudly announcing our exact location and when her mom should expect us to be home.

We continued to walk, and when I looked back, the guy was gone. Not as in “he veered off the path and I saw him walking to meet up with his wife and kids”, but as in “vanished”. My girlfriend’s phone call wound down, and as she finished, I almost didn’t say anything about the guy; we haven’t been dating all that long, and frankly my interest in the ticket stubs was probably strange enough behavior. But I went for it anyway.

“Did you notice that guy behind us?” I asked. “He ended up getting pretty close.”

“Of course I did,” she said. “Why do you think I made that phone call, and said what I said? I’m used to dealing with creepy men.”

I marveled at this for a minute. She’d intuitively picked up on the strangeness of the situation and been proactive using basic common sense. I’d just been walking along like an idiot. In that moment, I knew I had to say something to express my admiration, my thanks, and my relief that I wasn’t the only one slightly creeped out in that moment. I thought briefly, forming my thoughts, and then:

“They never did catch the Zodiac, did they?” I asked. “Now that’s a good movie.”