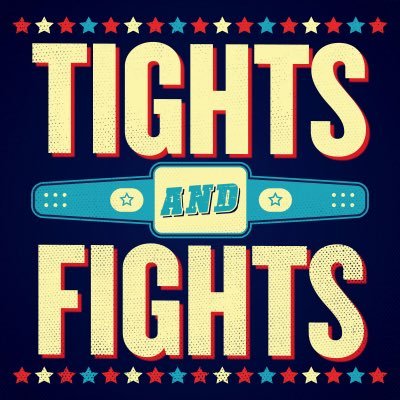 What Is it?: “The podcast that covers pro-wrestling with the sincerity and hilarity that it deserves.” If the podcasting landscape has too much of anything, it’s podcasts involving a bunch of white dudes sitting around telling jokes and podcasts about pro wrestling. Tights and Fights is not the former, but it is the latter.

Trying to listen to every pro wrestling podcast each week, a necessity given that modern-day wrestling news changes daily and you never seem to be more than two weeks away from a WWE PPV at any given moment, would drive you insane. You’d never be able to keep up, so it’s imperative to find the ones worth listening to.

Aside from podcasts hosted by pro wrestlers or wrestling-adjacent people, there are a few that rise above the fray. The Masked Man Show‘s genial and smart host David Shoemaker mixes well with fun guests. The Comedians of Wrestling always brings high energy and big opinions. You Should Love Wrestling has a good angle for presenting new and old wrestling discussions.

If there’s anything that they, and many other pro wrestling podcasts lack, it’s structure. Because there’s so much ground to cover on a weekly basis, even if you’re only sticking to WWE, shows tend to be hodgepodges of whatever the hosts happen to get to in their allotted time. It’s in this way that Tights and Fights rises above because it comes into each episode with a sturdy structure on which to pin its discussions. The show creates a framework that lets you know what to expect.

You can’t just hang any podcast hosts on that architecture and expect it to work, however. Successful podcasts in the entertainment world tend to have two rules. You must have a celebrity (defined loosely) involved, but if not, your hosts must be engaging and funny. Tights and Fights does not have the former, but it has the latter for sure. 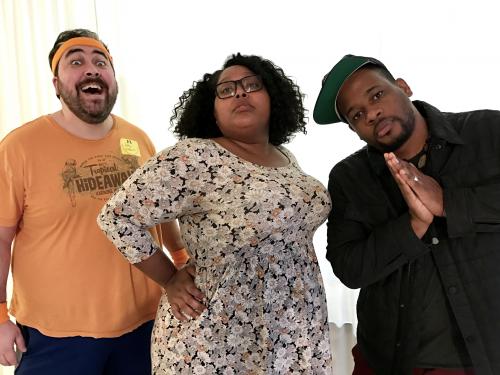 Who Are The Hosts?: Hal Lublin, Danielle Radford and Mike Eagle.

Podcast listeners may know Lublin from his work with Thrilling Adventure Hour and Welcome to Night Vale and he comes with a comedy pedigree. He not only serves as a capable host, but does so without becoming a cipher. He still adds strong contributions to the topics at hand.

Music fans might know Eagle as hip-hop artist Open Mike Eagle or from his Secret Skin podcast. Often the one with a strong or contrarian opinion, he always backs it up and it never feels fake. He also adds a lot of low-key humor that might skate by if you’re not paying attention.

Radford was actually the one who got me to listen to T&F initially. As a guest on another wrestling podcast, her comic timing and energy was infectious and I followed it to the show. In fact, I’d say that she’s on a short list of podcast personalities whose appearance on an episode makes it a must-listen. She’s funny as hell, brings strong insight, and is more than willing to go deep or poke fun at herself, whatever the situation calls for.

What’s A Normal Episode Like?: Every episode follows roughly the same format. There’s always a roundtable discussion about the big wrestling news/matches of the week. That’s followed by a spotlight segment about a wrestler or issue within the business. Then the show gets summed up with The Three Count when each host shares the thing they want to “put over.” Listeners of Pop Culture Happy Hour will probably find the format extremely similar, but that’s a compliment. There’s something to be said for having a show’s architecture in place for both the hosts and the audience.

"How is Tights and Fights going to find an audience when there are so many wrestling podcasts?" pic.twitter.com/H9VJMcXXB4

Who Is It For?: Pro wrestling fans who focus on WWE who are “smart,” but not to the point where they’re incapable of enjoying the wonders of wrestling. This isn’t a podcast that’s snarky for the sake of it. It’s not a podcast that marks out on everything either. These are people who genuinely enjoy pro wrestling from a storytelling perspective, but who also want to dig into what’s going on behind the scenes and off-screen as well.

Who Is It Not For?: People who don’t like pro wrestling, I guess? Also, the focus isn’t entirely on WWE, but it’s enough that if you’re interested in hearing about other promotions you’re not likely to get too much of that here. It’s also not a show for wrestling fans who just want to listen to people complain for an hour.

How Many Episodes Are There?: So far, there have been 29 episodes and the podcast is released weekly, usually every Thursday.

If you don't wanna listen to Tights And Fights, we've got two words for ya: Pretty Please? https://t.co/XkZHSPXSHK pic.twitter.com/6EFUgMpTmx

Any Special Guests?: Not usually, though there’s the rare occurrence where one of the hosts is unable to join the show and a guest host fills in.

Can I Jump Right In?: Absolutely. Because the show is always covering recent and relevant news, it’s your best bet to start with the most recent episode.

Ep. 27: The 2017 Royal Rumble Special – It’s a bit outdated now, but if you’re a WWE watcher who is still working through the inclusion of Roman Reigns as the No. 30 participant in the 2017 Royal Rumble, consider this your outlet.

Ep. 29: Friends to the end (but the end is now) – Really, you should just pick up with the latest episode where there’s discussion of Bray Wyatt’s WWE Championship victory, the Kevin Owens/Chris Jericho breakup and a “fun” look back at days of WWE misandry past.

So, Should I Listen To This?:

Check out the Should I Listen To This? archives to find out about more podcasts.