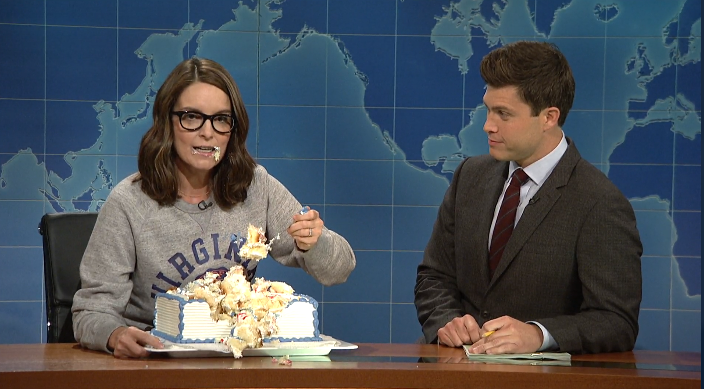 The first episode of Weekend Update Summer Edition may not have obtained the same high ratings as the mothership (possibly due to preseason football in some markets), but it was still a solid enough premiere (over six million viewers) to be seen as a success. A somber week for the country with the events in Charlottesville, Virginia over the weekend, and the infuriating responses from our president, made for a low-key second episode for anchors Colin Jost and Michael Che.

The duo attempted to come out swinging at Trump and his administration, but their jokes didn’t have much bite to them. A longer team-up about the white supremacists who marched on Virginia ultimately fell flat when Jost fumbled through his portion while Che mocked him off-screen. Making jokes during turmoil is tough, which Che acknowledged during the good-byes, and may have led to fewer jokes (about 10), along with a downturn in laughs from the audience.

After the appearance of Bill Hader as Anthony Scaramucci last week, WU Summer Edition went big again with Jimmy Fallon and Seth Meyers rolling up to the Update desk as George Washington and Thomas Jefferson, respectively. The two former Update anchors, and current late-night hosts, mocked Trump for suggesting their statues would be torn down next after Robert E. Lee’s, while Che tried to get the founding fathers to discuss their slave owning in a bit that was funny, but may have gone on a little too long.

The always great Kenan Thompson showed up as Neil DeGrasse Tyson to discuss the upcoming solar eclipse, but the real highlight of the night was Tina Fey. The University of Virginia graduate took up most of the last segment of the night to discuss what happened to her alma mater, and how she has been dealing with the state of our country by “sheetcaking.”

“Sheetcaking,” according to Fey, is buying a cake and cramming it into your mouth while screaming your anger into it. Fey demonstrated this tactic by covering a wide range of topics from Standing Rock to Paul Ryan while continuing to take enormous chunks out of the American flag cake in front of her.

Fey may not have been rallying the masses to fight Nazis in the streets, but honestly anyone could do that because they’re Nazis. Instead, she focused her anger on destroying a cake while lobbing monster takedowns along the way. It was a great Update moment, and once again showed that Fey is not only one of SNL’s greatest writers, but television’s as well.

After the week the country has gone through, viewers might have hoped WU Summer Edition would be a reprieve of sorts, but it’s hard to catch a break with so much happening right now. Jost and Che along with some help from friends did their best, but it took a legend and a sheetcake to bring the big laughs during this episode.

** NFL preseason games will preempt WU Summer Edition in various markets, but in Philadelphia the entire run will air on COZI TV because the NBC affiliate is the official home for Eagles preseason games, all of which take place on Thursday.

** Writer Katie Rich, who was suspended from SNL last season for a tweet about Barron Trump, has been listed as a writer for the first two episodes of WU Summer Edition.