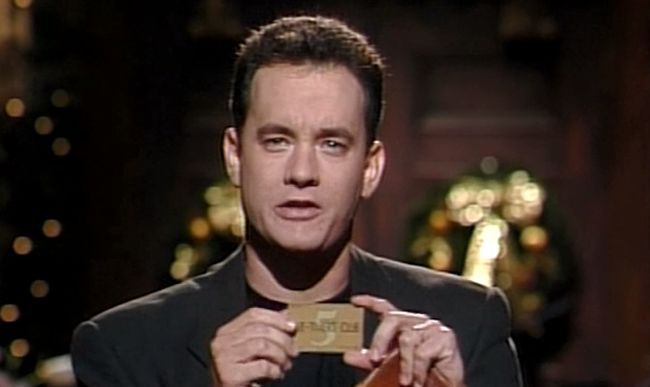 This week, Tom Hanks will host Saturday Night Live for the ninth time, and while there are people who have hosted SNL more times than Hanks, not many are as beloved by cast members and fans. It’s been over 30 years since Hanks hosted for the first time and during that span, he has gone from comedic actor to Oscar winner. But Hanks has always found the time to return to SNL.

Here are some of the best moments from his eight previous times hosting SNL:

Hanks hosted for the first time in 1985 during the tumultuous 11th season when Lorne Michaels returned after five years away, hired a new cast, and fired most of them at the end of the season.

One of the cast members to survive the 11th season was Jon Lovitz. Over the next few seasons, Lovitz and Hanks appeared regularly together when Hanks hosted, often doing this sketch withstereotypical 80s stand-up comedians trying their material backstage.

When Hanks hosted for the fourth time in February 1990, he was still a few years away from winning back-to-back Oscars and actually had a string of box-office duds after breaking through with Big in 1988.

By the time Hanks appeared as Garth’s Aerosmith roadie cousin, Barry, Wayne’s World was a bonafide smash, and this sketch is an all-time classic.

One of the greatest moments in SNL history was the creation of the “Five-Timers Club” during Hanks’ fifth time as host in December 1990. Hanks met previous five-time hosts Paul Simon, Elliott Gould, and Steve Martin during this initial sketch.

Since Hanks was granted membership, the club has been mentioned several times, reappearing during Justin Timberlake’s fifth hosting appearance in 2013.

Another of Hanks’ recurring characters is Jeff Morrow, a.k.a. Mr. Short-Term Memory. Written by Conan O’Brien, Morrow went on a blind date, visited his friend in the hospital, and appeared on the game show “Game Beaters” where he repeatedly met Tony Randall.

There are many reasons Hanks is a great SNL host, but his willingness to appear during any segment of an episode, including Weekend Update, makes him an all-time great. Here, he joins Dennis Miller and Dana Carvey for a little yuletide spirit as one of three Dennis Millers.

Hanks hosted for the sixth time in 1992, filling in for originally scheduled host Joe Pesci, who had to cancel due to a scheduling conflict with the filming of Home Alone 2. Pesci would host the third episode of the next season, and Hanks appeared in this quirky sketch that takes a rather dark turn.

In the four years between hosting gigs, Hanks won two Oscars (Philadelphia, Forrest Gump), and was nominated for a third (Apollo 13), making him one of the biggest actors in Hollywood.

The first appearance of Chris Kattan’s Mr. Peepers is just about as annoying as all the subsequent appearances of the character, but this sketch is included because how many times do you get to see someone hang off an Oscar winner dressed as a some sort of missing link?

Hanks hosted for the last time in May 2006, but has been a regular visitor to Studio 8H over the last 10 years, making several guest appearances. One of his best visits as a guest was during the season finale of season 34 hosted by Will Ferrell, where he appeared during a Celebrity Jeopardy sketch as a dim-witted version of himself.