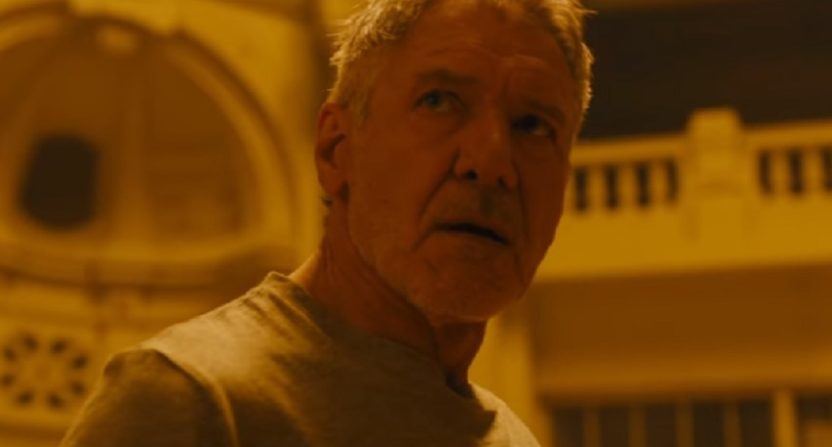 Movie studios probably release too many trailers for their blockbuster properties these days. (Although the previews are always enticing for movie fans and sites that love pop culture content.) But in some cases, the multiple trailers are intriguing because they reveal more of a movie’s story with each subsequent release. (And more often than not, they’re also reaching for a different segment of the wider overall audience.)

The second full trailer for Blade Runner 2049 may be the most compelling yet because it provides the clearest look at the movie’s story. The very first teaser was an appeal to nostalgia, to fans of the original 1982 Blade Runner movie. Those unfamiliar with it would recognize Ryan Gosling and Harrison Ford, and maybe even the “Blade Runner” title, but might also wonder what the hell was going on. The first full trailer felt more conceptual, reminding (or informing) viewers of how central Replicants are to the story and how those who create these artificial beings might develop a God complex.

With this latest trailer, we get some story elements to go with the concept and gorgeous visuals from cinematographer Roger Deakins and director Denis Villeneuve. Harrison Ford’s Rick Deckard has been on the run for the past 30 years, and at least two parties are very interested in finding him.

Deckard was a former LAPD officer, a “Blade Runner” tasked with finding and eliminating Replicants whose presence is illegal on Earth, went into hiding at the end of the original Blade Runner. Was it to protect the Replicant he’d fallen in love with or, as has been theorized for the past 30 years by fans, is Deckard a Replicant himself and knew he would eventually be hunted down?

This new trailer seems to confirm that theory, one which has been pushed forth by Blade Runner director Ridley Scott. Current officer K (Ryan Gosling) is working a case and apparently discovers Deckard’s whereabouts, which his boss (Robin Wright) isn’t happy about. If it becomes public that a Replicant is out there and had been eluding the police for 30 years, that wouldn’t reflect well on the department. Furthermore, if a Replicant has managed to live this long, something that wasn’t supposed to happen (their original design was for a four-year lifespan), could that mean others like him have been living among the citizenry for decades? Could humanity become obsolete?

Personally, I think this is the first trailer that should have been released. Maybe it doesn’t matter, but if after reacquainting the audience with the Blade Runner concept, the marketing went right into the story and showed there was plenty of action (Dave Bautista!) to go with the brainy sci-fi, that might have made more of an impression. But maybe the right impression has been made and the slow build is the way to go. There’s still plenty of time to generate excitement and talk about the story without revealing too many surprises.

Blade Runner 2049 will be released in theaters on Oct. 6.