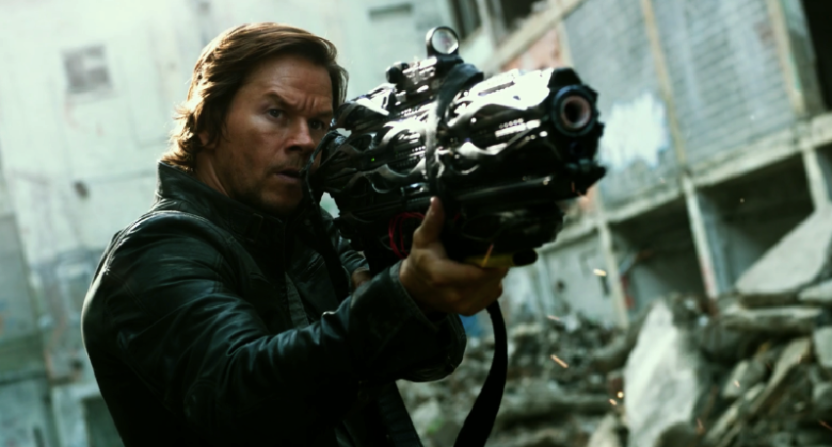 Virtually nothing in Transformers: The Last Knight makes any sense, but does that matter? If you’ve seen the previous four films in this series — or even just seen one or two of them — you know that attention to story and detail isn’t a priority for director Michael Bay and the various writers who have pounded out scripts for these toy-inspired assaults on the senses.

Yet The Last Knight almost seems to double down on devolving into complete nonsense during its two-and-a-half-hour run time. Using the word “devolving” is probably generous, implying that the movie actually started out resembling something coherent and compelling. But I’ll admit that I was with this movie for the first 60 to 90 minutes.

Yes, he’s become a cliché in many respects. There’s not a gunfight or woman’s backside that he won’t linger on lovingly with his camera. But the man still frames silhouettes against a sunset and shoots muscle cars roaring down the road or fighter jets streaking through the sky better than anybody. That stuff just looks cool. Truly, no one does it better, even if it’s long past time that Bay move on from the giant robots in disguise clashing with one another and treating the earth like their sandbox.

The Last Knight picks up where the last Transformers movie, Age of Extinction, left off. And if you don’t remember what happened in that movie, you’ll still be OK following along with this one. Because aren’t they all the same movie, really? But Mark Wahlberg returns with his super-adventure name of Cade Yeager and a really big gun (framed with care by Bay’s camera) that can blast holes in Transformers, and he’s helping the Autobots that the government has forsaken and outlawed.

I didn’t remember that Yeager is supposed to be an inventor, but the movie reminds us of that about halfway through when he’s asked to explain just what it is that he does. I thought he was a mechanic who had a talent for tinkering with old robots, but I really wasn’t that far off.

Again, it doesn’t matter. Yeager doesn’t invent anything in this story, he doesn’t create any device that helps the Autobots or even move the story along. But his biceps are as thick as tree trunks, bro. Well, he does invent some strained chemistry with Vivian Wembley (Laura Haddock), a gorgeous professor of dark age skepticism at Oxford University.

Haddock is like a genetic combination of Angelina Jolie and Megan Fox created in a lab for our leering pleasure, and Bay is all too willing to put her in a slinky dress when there’s virtually no reason for it. At least she’s in some more sensible, military-type clothing when the story forces Wembley into action. And she is a key part of the story. Sort of. I think. It’s explained in the script somewhere, even though you’ve already figured that out by then, and supposedly factors into a climactic moment.

Oh, and Anthony Hopkins is in this movie too. You knew that from the trailers when asking yourself, “Why is Anthony Hopkins in a Transformers movie?” Hopkins plays Sir Edmund Burton, the last in a long line of Englishmen tasked with hiding these alien robots from humanity. No one points out that he and his forefathers have done a terrible job of that for the previous four Transformers films. But maybe nobody knew about these giant robots that change into cars in England.

As the title indicates, England is a big part of this latest Transformers movie. These alien robots crash-landed on Earth thousands of years ago and were roused from their slumber by the wizard Merlin. Oh, yeah — the Transformers fought alongside King Arthur against the invading Saxons. Arthur never would have become the one, true king of the Britons if Merlin (played by Stanley Tucci, who played someone else in the last Transformers movie) hadn’t implored them to save the kingdom that eventually became Camelot.

At least the Transformers didn’t have anything to do with creating Excalibur. Leave one part of the legend alone! But Guy Ritchie didn’t include any of this stuff in his King Arthur movie that was released earlier this year. Though the Arthurian prologue of this movie, even with ridiculous metallic dragons soaring through the air, was probably better than Legend of the Sword. Sorry, Guy Ritchie — it’s true.

You know, Michael Bay might make a really cool King Arthur movie. At least he gets to make a part of one here, along with a slice of a World War II movie in which Bumblebee takes on the Nazis. And for some reason, he was much more of a badass while fighting Nazis than he is now. That’s probably self-explanatory. But whatever kind of movie Bay hasn’t yet made has been mashed into this one. The Last Knight is like his greatest hits album with a couple of new tracks included.

Somewhere among all the backstory explaining how long the Transformers have been among us, involving themselves in virtually every significant human conflict depicted throughout history, there’s still a primary narrative about Optimus Prime going back to his home world of Cybertron to find out why evil robots keep coming to Earth to wipe out humanity.

As it turns out, Cybertron is dead and needs Earth (which is called something else by the Transformers) to bring itself back. Something named Quintessa that we’ve never seen in any of the previous Transformer movies, yet has apparently been out there all along, brainwashes Optimus Prime into leading an attack on Earth and getting it ready to be harvested for a new Cybertron.

Optimus is a bad guy now! Until he isn’t, when the story conveniently calls for it. (And really, the thing that turns him from heel back to face is so simple that it’s baffling none of the Autobots, Cade Yeager or Edmund Burton —  amusing as he maniacally laughs in the face of danger, happy to see some action — thought of it in the first place.)

What’s surprising is that Optimus is such an insignificant part of the movie until it feels like the movie is about to end, but you remember that it can’t end because Optimus Prime hasn’t come back to Earth yet. If you haven’t already thought this movie is way too long, you’ll probably realize it then.

After that, the screen just becomes a total clusterfuck of digital effects. There are pieces of the alien planet trying to dig into Earth, while fighter jets and spacecraft battle it out in the sky. On the ground, the military (led by the returning Josh Duhamel and a guy who’s not Frank Grillo) and the Autobots are taking on the Decepticons, as Mark Wahlberg and the hot British professor are trying to find whatever is supposed to save the Earth.

It’s exhausting. And get ready for more of it, probably with someone trying to copy Michael Bay, though hopefully not. These Transformers movies might just outlive us all.