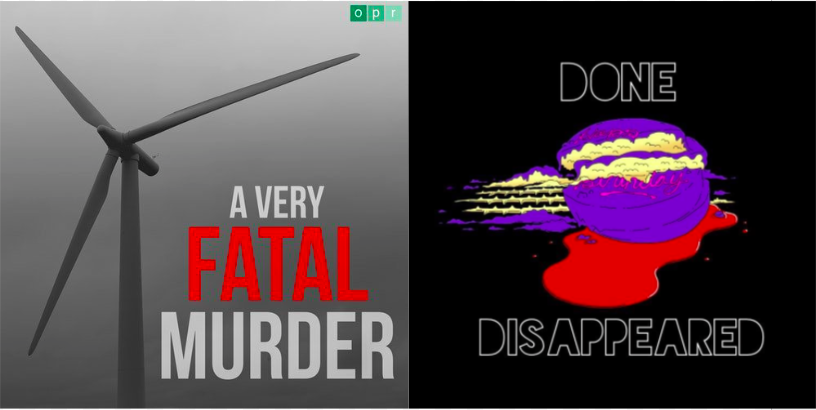 Given the rise of the true crime drama podcasts such as Serial, S-Town, and Dirty John, it was only a matter of time before we started getting send-ups of the genre. Whereas Netflix already perfected the true crime doc parody game with American Vandal, two true crime parody podcasts recently hit the charts.

We figured what better way to figure out which one does the better job breaking down the self-importance and stylized storytelling of the genre than to face them against one another?

What Are They?: Podcasts haven’t been mainstream entertainment options for too long, but it already has it’s first real trope in the true crime genre. Arguably the most popular genre of them all, the shows that have stood out and risen to the top of the charts have established some very specific “rules” when it comes to how a show works.

Just like with any genre, that makes the genre and the rules ripe for parody. From the self-important host who often makes this story about themselves (Serial, Missing Richard Simmons) to the NY-based host who infantilizes small-town America (S-Town) to the unfortunate ad partners who follow the discovery of a grisly murder by trying to sell you “shit in a box” (basically every podcast), there are tons of tropes to play with and both podcasts go to town on them.

What Are They About?: A Very Fatal Murder centers on the mystery behind the murder of 17-year-old Hayley Price in Bluff Springs, Nebraska. In a small town where everyone knows everyone else, how does a promising, young, “really hot white girl” get killed without anyone knowing why?

Furthermore, why did the killer paint her nails and give her a really nice haircut afterward? Perhaps the answers lie with the mysterious W.O. Calloway, who owns everything in town but has never been seen in public. Or perhaps Haley’s dreamy boyfriend knows more than he’s saying. One thing’s for sure…the people behind this podcast expect to win some awards for doing this.

Done Disappeared concerns the disturbing case of Clara Pockets, a Pennsylvania woman who went missing in 1987 after stopping to order a cake for a birthday party that she never showed up to. What happened to Clara, why did she disappear, and why did she order such a small cake for what was going to be a very large gathering?

Those are just a few of the many questions this show asks in its search for answers that we may never know. Meanwhile, the podcast is in a race against time as other true crime podcasts start to look into the disappearance of Clara Pockets as well.

Who Is The Host?: A Very Fatal Murder is hosted by Onion Public Radio (OPR) correspondent David Pascall, who really wants to make sure you know that he’s from New York, went to school at NYU, and fully expects to win a Pulitzer for this podcast. Pascall has worked closely with a super-computer named ETHL to find the most interesting, violent, culturally relevant murder cases in America.

Pascall’s quest for a murder case that is not only fascinating, but also “says enough about the decline of the working class” is answered and he heads to Bluff Springs where he tries to make the best podcast possible, even if his personal goals seem in conflict with things such as compassion, understanding, and any kind of real concern for the people affected.

Done Disappeared is hosted by John David Booter, who describes himself by saying, “I’m not a podcaster, I’m a filmmaker. I’ve never made a podcast, but I’ve also… never made a film.”

While recovering from a bad breakup, he decided to make a true crime podcast like everyone else and ended up discovering the disappearance of Clara Pockets. John David lives at home with his mother June and seems to have pinned all his hopes and dreams on the outcome of this podcast (or at least monetizing it). While he often sounds like a sad sack suffering from depression, there’s a rage lurking below the surface that comes out anytime a rival podcast tries to butt in on his territory.

Finally, someone understands: there is absolute nothing funny about Clara’s Disappearance. Don’t forget to subscribe! She needs all the help we can get. #findclara #justiceforClara pic.twitter.com/yNoT4nmw96

How Many Episodes Are There?: A Very Fatal Murder includes seven episodes in total (Episode 5 is broken up into two parts for no discernable reason). Episodes range between nine minutes and 13 minutes long.

Done Disappeared is eight episodes long, or nine if you include the “bonus episode.” While most episodes check in at 10-to-12 minutes long, the finale clocks in at 32 minutes long.

Both shows make the really smart decision to keep things short and sweet. They’re smart enough to understand that parody works in small doses and nothing kills the comedy like overstaying your welcome. There’s also only so many times you can hit on all the tropes of the genre before you’re overdoing it.

How Good Is The Satire?: In A Very Fatal Murder, they’ve decided to really focus their sights on NPR-style true crime podcasts such as Serial and S-Town. That’s made very clear by the NYC-centric host who seems incapable of understanding small-town American life and sees the residents of this town as strange creatures that need to described metaphorically rather than understood as fellow human beings.

Pascall is callous in his desire to turn a young girl’s murder into great storytelling, which is often a criticism at the heart of true crime podcasting, and the jabs that they take at the genre are pointed, daring, and often hilarious.

The show also leans into the notions that these kinds of podcasts often follow breadcrumbs that lead nowhere, seem to think they know better than law enforcement, and treat the people in their investigations as characters in a story rather than real human beings, all in the name of iTunes Chart glory and Peabody Awards. As you’d expect with something from The Onion, it’s often silly, sometimes harsh, but always trying to stay true to the premise it’s skewering.

Done Disappeared differs because its targets are a bit broader. Coming from the point of view of the amateur true crime podcaster, it leans into the tropes and criticisms that often come with that. A sing-songy delivery that makes the nonsense script sound more sensical than it actually is. An absurd reliance on question-asking in order to fill time. A misplaced desire to create mystery and stoke accusations for the sake of stretching out episode length. And the overriding feeling that the host is more interested in building a brand and monetizing the podcast rather than actually solve the mystery.

One of the best bits in the show is that rival true crime podcasts keep trying to horn in on the Clara Pockets story, which leads to quick-hit parodies of actual podcasts such as My Favorite Murder, Up & Vanished, and Sword and Scale. These bits are when the satire is at its fiercest and funniest.

Along the way, host John David Booter is a joy to listen to as a dim-witted goof who can’t help but get sidetracked by issues big and small (a guest appearance on Nancy Grace’s show that goes awry, running into his ex and her new boyfriend at the supermarket). By the end of the show, it has taken the genre to its absurdist, logical conclusion in the very best way.

One thing that both shows do really well is go to town on the tropes of podcasting advertising. There are ads in both shows but none of them are real. Instead, both shows skewer the familiar ad partners that pop up in every podcast you listen to (MeUndies, Blue Apron, Squarespace), twisting their offers until you realize that they’re all basically just companies that send you “shit in a box.”

Some of the highlights include Blue Apron ads on the heels of gross descriptions of dead bodies, Sand Camp, the subscription service that dumps two tons of sand on your lawn every month, and an ad that sounds like a Stamps.com commercial but ends up being angry screed by the USPS to customers who don’t have any respect for what they do.

So, Should I Listen To These Shows?: If you’re a fan of true crime podcasts or even just enough of a fan of podcasts that you’ve already picked up on most of the ongoing tropes therein, you’ll likely find much of what happens in both shows to be fairly entertaining. For the part-time podcaster who only checks in on the genre when a show breaks through into the mainstream, like Serial or S-Town, we’d recommend going with A Very Fatal Murder. However, if you’re the kind of podcast listener who devours shows of all kinds in the genre, we think you’ll enjoy both of them.

In a bit of an upset, we’d actually say that Done Disappeared was the preferred listen because it not only skewers the genre but also digs into the entire podcasting medium in a knowing way that podcast devotees will really enjoy. Plus, it takes a particularly absurd turn towards the end of the run that elevates the whole thing to another level.