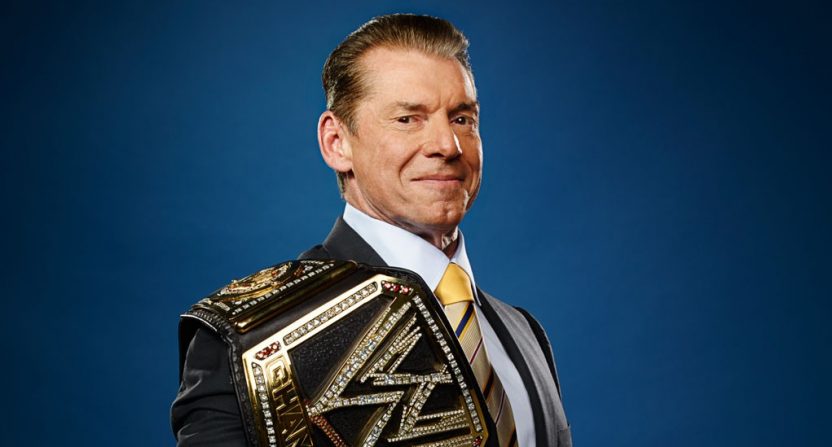 Vince McMahon doesn’t appear much on WWE programming much these days, kind of a surprising development for a man who was so outwardly the face of his company and the cultural phenomenon he spawned. Though that just adds to the power of a McMahon public appearance, such as during the April 3 edition of Raw when he announced the superstar shake-up.

But with McMahon no longer in the limelight as he once was, the time seems perfect for Hollywood to give him the biopic treatment. According to The Hollywood Reporter‘s Rebecca Ford and Borys Kit, a movie about the legendary wrestling promoter and personality is in development with TriStar Pictures (part of Sony Pictures Entertainment).

The project is titled Pandemonium and is set to be directed by Glenn Ficarra and John Requa, part of the team behind fall’s breakout TV success This Is Us. But the duo has also made several feature films, including 2016’s Whiskey Tango Foxtrot and Crazy, Stupid, Love (2011).

As reported by THR, the script by Craig A. Williams (Underdog) was shopped to Hollywood studios last year, but didn’t get any bites. A big reason for that is that WWE and McMahon hadn’t signed off on the screenplay, and studios probably didn’t want to risk invoking the Chairman’s wrath and have McMahon denounce the project. But that’s no longer a problem as producers secured the rights to McMahon’s life story. (It might not hurt that WWE Studios is also helping to produce the film.)

It’s not yet known what part of McMahon’s life Pandemonium would focus on, but the story of Vince taking over his father’s wrestling business, changing how the sport was run throughout the country, and eventually turning WWE into a global entertainment brand certainly seems like it could make a good movie. An immediately intriguing question is what the culmination of a McMahon biopic would be. The 1980s boom of “Rock ‘n Wrestling” and the first WrestleMania? McMahon becoming a character in storylines in the mid-90s?

OK, the real question that comes to mind for a Vince McMahon movie is who plays the man himself? And if any of McMahon’s most famous stars, such as Hulk Hogan or Andre the Giant, are in the film, who plays those guys? Will wrestlers who McMahon feuded with, like Jerry Lawler or Steve Austin, also be a part of the story? What about McMahon’s feud with Donald Trump? Does the XFL get mentioned? Just how much time will this biopic cover? Those questions already make this project exciting. Hopefully, TriStar can fulfill such expectations.

There's rumors of a Vince McMahon movie… Nicolas Cage. It's that easy.

1 thought on “What a maneuver! A Vince McMahon biopic, Pandemonium, is in the works”