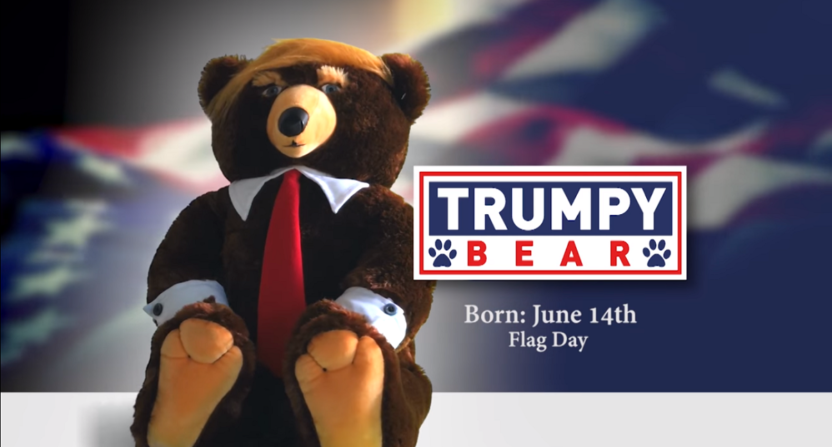 Do you know what Trumpy Bear is? I didn’t, but then I’m one of those millenial cord-cutters, so I don’t subscribe to one of the 10 networks this weird-ass commercial is airing on right now:

There’s not much there that would need to be changed if SNL decided to do a parody version. It’s essentially a parody on its own, from the opening narration onward. The entire commercial was clearly produced with a multitude of tongues planted firmly in cheeks, and it was hard to believe that it was anything other than a joke ad, with perhaps a real bear for people with $40 (plus shipping and handling) to throw away on plush irony.

According to Simon Dumenco of Ad Age, Trumpy Bear commercials are now expanding to as many as 10 national networks:

But if it’s a joke, it’s an expensive joke; according to iSpot.tv, which has attention and conversion analytics from more than 7 million smart TV screens, Trumpy Bear is now backed by a national TV ad campaign. Starting on Oct. 13, the 2-minute informercial began running on four networks: Animal Planet, Discovery, Grit TV and INSP (the “family entertainment programming” channel owned by Inspiration Ministries).

Over the past week, Trumpy Bear has expanded to 10 networks; the mix now includes the Outdoor Channel and the American Heroes Channel. To date, the ad has run 55 times, including five times so far today, according to iSpot. The type of shows it’s been airing on—including reruns of “Cops,” “Walker, Texas Ranger” and “Bonanza”—suggests that Trumpy Bear is not meant to be taken as a joke by its targeted TV viewing audience.

So, what’s going on here?

It’s possible that what was originally intended as a joke ended up catching fire with both the type of person who sees a kitschy, made-for-TV product and thinks “Ha, that’s hilarious, I need to get one for myself/as a joke for a friend” as well as the kind of person who would see that ad and legitimately think it’s a fantastic way to support Donald Trump and his various values and ideals. (There’s certainly likely a subset in between of people who like Trump but recognize it as a joke commercial.)

The product, though, is very real. Advertising Age again:

The GetTrumpyBear.com website offers a hint at the bottom of its home page: “Copyright © 2017 Exceptional Products, Inc.” That’s a Dallas-based company (and, indeed, according to the website order form, Texas customers have to pay sales tax on Trumpy Bear). On its website, SellonTV.com, Exceptional Products describes itself as …

Meanwhile, an additional piece of the puzzle: According to domain registration records, GetTrumpyBear.com was registered on May 2 by National Express, Inc., a Norwalk, Connecticut direct-response marketing company whose website proudly touts its involvement with a slew of “as seen on TV” products including the Vidalia Chop Wizard, the Betty Crocker Decorating Kit, the Sobakawa Cloud Pillow and more.

It’s entirely possible, though, that someone came up with a dumb bear idea, a reasonably well-done joke commercial, and is now about to make a ridiculous amount of money. At least until Trump himself stumbles upon the Bear during one of his daytime TV binges and files a cease-and-desist, anyway.