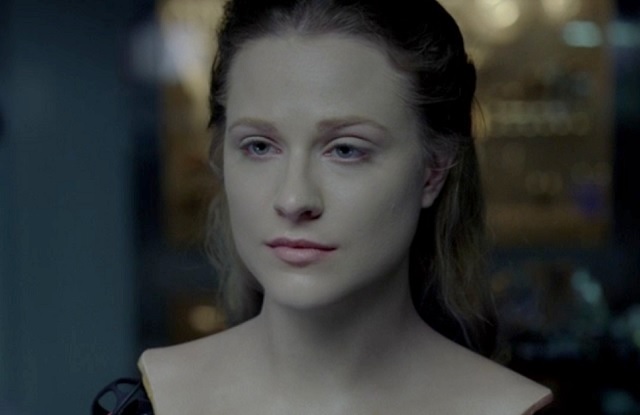 Dolores Abernathy, you’ve come a long way. Westworld’s fair country maiden was presumably the series’ most important character from the very start. In recent weeks, it seemed as if Maeve might have taken that role away from her, as her attempt to escape from the park and her human oppressors appeared to gain urgency. But there was a reason Dolores was the first face we were introduced to in this first season.

Bernard didn’t frequently have her downstairs at headquarters for meaningful chats just because she was a good talker and listener. And The Man in Black didn’t continually stalk and torment her just because she was a pretty damsel in distress. Why did Dolores’ father whisper “These violent delights have violent ends” in her ear before he was taken away and decomissioned? Why was she hearing Arnold’s voice in her head, telling her what to do?

All along, Dolores has been important. To Arnold, then Bernard, she was the evolution of their magnificent creation. The episode begins with a look at Dolores in her original robot form, which we only got a glimpse of when Logan gutted her and exposed her insides. Presumably, she’s been modernized to the more organic form that many of the other hosts occupy now, Regardless of whether her physical body is the same or not, her consciousness has always been there. And Dolores’ consciousness is very much the point of this entire enchilada.

The Man in Black always thought he was in control, that Dolores was a key to bringing him to the center of the maze that he so eagerly coveted. But who was really in control? And who was truly using who? As MIB has been told throughout this first season, the maze wasn’t for him. It was never meant for the guests. This was for the hosts. And MIB hasn’t been the only one seeking answers, seeking meaning. 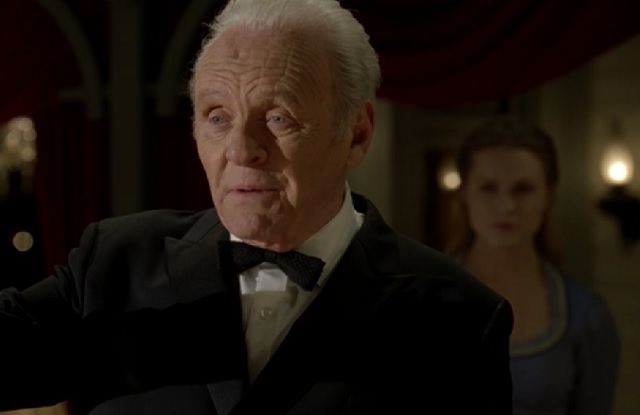 The concept of artificial intelligence and sentient robots has been a standard of science fiction ever since the genre was created. Are these creations alive? If they think and feel, what makes them different from humans? And what happens when these beings realize they’re more intelligent and more powerful than their creators? Uprising? Revolution? Eradication?

We’ve seen how this goes in movies like The Terminator and its many sequels, or Avengers: Age of Ultron. The lifeform that views itself as superior wants to take over. But sometimes, the resolution is simpler. In last year’s Ex Machina, the robot simply wants to live in the outside world and experience all the existence she has missed out on. OK, she does get violent to achieve those means. Maybe that’s unavoidable in these kinds of stories.

After all, we’re talking about control. Those who have it don’t want to give up the reins. Those who don’t have control want to take it. Do these sorts of conflicts ever end peacefully? Maybe occasionally. But not if you want some compelling television. And this conflict has played out on several levels in Westworld‘s first season.

Are the hosts in control of their own lives, or are they playing out scripts and living out loops at the whims of the specialists, engineers and technicians, not to mention the guests who visit the park and use the hosts as kill and fuck buddies? Is a writer like Lee Sizemore in control of his narrative or is he simply along for the ride in Robert Ford’s world? Does the board of the Delos Corporation control the park and its intellectual property or does Ford its ruler since he built the place and everything in it? Do any of these questions matter if one side establishes itself as the more powerful entity and chooses to take control?

Episode 10, “The Bicameral Mind,” seemed to throw the series into chaos with its ending. Ford was seemingly in control, essentially playing the “I’m quitting before you can fire me” card with Delos and rolling out his new narrative, “Journey into Night.” But have we as viewers, and everyone involved in the story, been playing out this narrative all along? Is that what season one of Westworld has been, a story of hosts trying to escape the world that’s trapped them? This entire revelation almost seemed to be a meta development by showrunners Lisa Joy and Jonathan Nolan, turning a mirror on the audience.

Oh, you thought you knew what this series was about? Guess again. Go spend the next eight to 12 months trying to figure it out all over again. 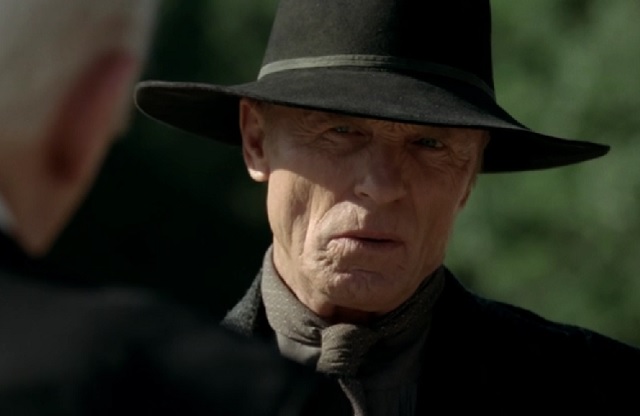 However, the Westworld audience does deserve some credit for getting the jump on some of this season’s story developments. Two of the prevailing theories that fans discussed, especially in the larger online community, turned out to be very much true. Bernard did indeed turn out to be a host, created as a brilliant, yet willing and able, collaborator by Ford. And he was built in the likeness of Ford’s original partner and co-creator, Arnold. As a host programmed by Ford, Bernard wouldn’t have any of the questions or dilemmas that plagued Arnold as he grappled with creating consciousness. But Ford (and Arnold) did too good of a job. Bernard does question his existence. He feels the loss of his son. He wonders if Ford has lost his way in an effort to build his own world.

The other big fan theory that was confirmed as season one ended is William’s true — or future — identity. The man who came to Westworld as a wide-eyed innocent, unsure of what experiences awaited him in this fantasy getaway, was indeed a younger version of The Man in Black. In this park, the man who seemingly didn’t have control of his own life — his relationship, his career, his identity — found out who he really was. Or, at the very least, he discovered a side of himself that had to be released during his countless visits to the park. And acknowledging that darker side of himself probably destroyed his real life in the outside world, giving him no other purpose than to solve the puzzle that’s bugged him since his youth.

The rules of Westworld became apparent to William on his second visit when Dolores didn’t recognize him. She’d been reset. The loop had run full circle. Time for new storylines and adventures. Unless guests just wanted to repeat the same experiences. But Dolores seemed alive to William. He recognized early on that she wasn’t like the others, despite being made to fit in the box that Ford had created. While he may also have been angry (and hurt) over being forgotten, William wanted to free Dolores — even if it meant treating her so badly, so inhumanely that she would never forget. (Maybe that’s giving The Man in Black a bit too much credit as a human being. On some level, he did seem to enjoy killing fellow Cowboys and Indians, all while knowing that these hosts couldn’t actually hurt him.)

That’s what getting to the center of the maze, solving Ford’s game, was ultimately about. William was so impressed, so captivated by Ford’s creation that he nudged out Logan and convinced Delos to make a significant investment in the park. As The Man in Black’s role and power grew, he essentially became the owner of the park. Apparently, Ford had no choice but to let him come back repeatedly and wreak havoc in his own quest for knowledge, whether he had the ability to somehow make MIB leave or not. But by the end, it was clear who was in control and MIB had to concede. 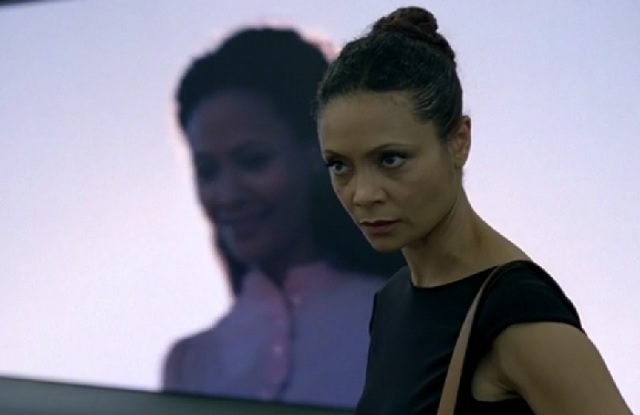 The only one who isn’t ready to cede control as season one ends is Maeve. It looked like her escape plan was going to work, thanks to the help of fellow hosts Hector and Armistice, along with Felix, who’s been her greatest advocate all along. But Felix makes a disturbing discovery while looking over Maeve’s code one last time before she’s set to bolt from the park. This whole thing — Maeve gaining greater awareness, getting Felix and Sylvester to help her, planning the escape — has been scripted. For whatever reason, someone wanted her to leave. Was it Ford, in an attempt to prove how magnificent his creations are and take control away from Delos? Was it Bernard, hoping to show that the hosts are alive and capable of living as sentient beings?

Once Maeve finds out that she’s once again a pawn, she chooses to rebel. (At least that’s how it appears. We’ll truly find out in season two.) She wants to show she’s in control, not whoever’s still programming her. Just as she boards the train that will take her out of the park (and safely, with the explosive charge removed from her spine), she gets off and decides to go back. She’s going to find the daughter that she lost. She’s going to find the one thing that made her human, as MIB witnessed when she was mourning her murdered daughter just before her death. She’s exercising free will, just as all of the other hosts are now apparently free to do.

(The robot revolution may include other parks, by the way, which was hinted at by the discovery of the samurai hosts — or Samurai World. That would be following the original Westworld movie, which had several other parks for guests to visit. Do those other parks represent a safe haven of sorts for the guests or new territory to conquer for the newly enlightened hosts?)

Westworld became a whole new series as its first season ended. How often has the something that exciting happened, with a new story beginning as the previous one closes?