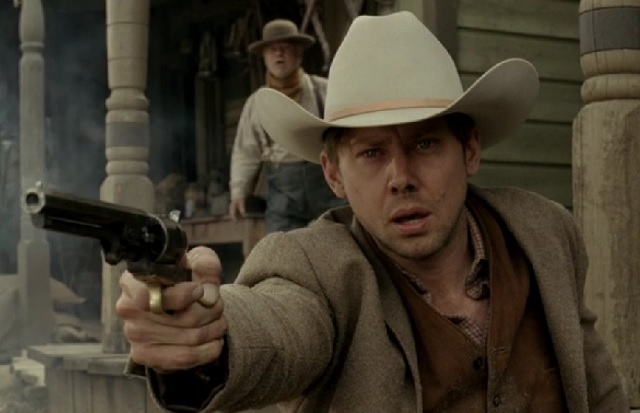 Westworld started off its first season with two episodes that were mostly filled with introductions. While the first two episodes were strong, the third one blew both out of the water.

After getting most of the “world building” and introductions out of the way in the first two episodes, Westworld was able to jump right into the storylines from the start in episode three. As a result, the writers chose to kickoff the third episode by revisiting arguably the key storyline so far, “the glitch.” Many more story threads were introduced throughout “The Stray,” so starting off with the most prominent was important to bring the viewer into the episode.

The opening conversation between Bernard (Jeffrey Wright) and Dolores (Evan Rachel Wood) really set the tone. It was nice to start off with Dolores questioning Bernard about his son because that helped establish what the episode was about. Going deeper, one of the underlying storylines of this episodes was “back stories.” We learned the background of many of the main human characters and even some of the hosts.

Let’s break down the different storylines continued and others brand new that were brand new to Westworld in episode three. 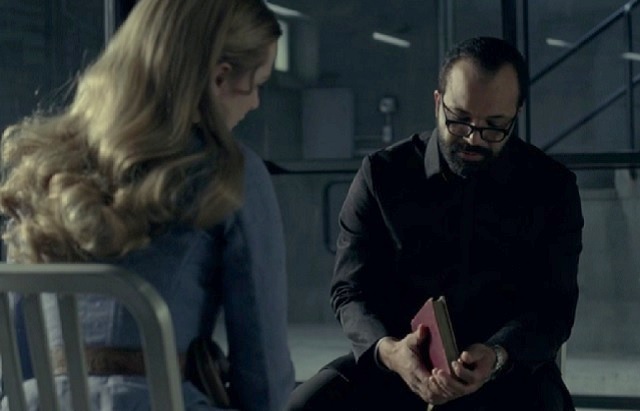 This is a major theme for the entire show and really jumped off the screen here. The main portion of the storyline revolves around Bernard’s interest in Dolores. The two continually have very interesting, deep talks about each other and what exactly their goals are in life. While Dolores’ goals were mostly discussed, she does challenge Bernard to learn more about his.

It’s intriguing to see how Bernard studies Dolores and how he acknowledges something is wrong. This is important to note as Bernard tells Theresa Cullen (Sidse Babett Knudsen) and Dr. Robert Ford (Anthony Hopkins) that the glitch is mostly gone, if not entirely. However, Bernard continues to acknowledge its existence to two people: Dolores and Elsie (Shannon Woodward).

Speaking of Elsie, she witnesses arguably the most horrific evidence of the glitch yet at the end of the episode. For the first time all series, it looked as if a host would in fact go off the rails and injure a human, as Stubbs (Luke Hemsworth) talked about. The duo encounter “the stray” host in the wilderness who Elsie puts in sleep mode. The sleep mode doesn’t work perfectly as the host proceeds to attack Stubbs and nearly drops a rock on Elsie’s head. However, instead of dropping the rock on Elsie to kill her, the host continually pounds the rock into its own head, effectively killing itself.

This was an interesting scene simply because it pointed out a glaring issue with the host. For some reason, this host wandered off, only to lure two humans into a trap and then kill itself. What motive did the host have for doing this?

Elsewhere, when Dolores arrived back at her house, she was nearly raped and killed by a couple of bad guy hosts. This sequence could be crucial going forward, incorporating multiple scenes, timelines, and storylines in one. If you watch closely, when Dolores looks at her dead father, her sight goes haywire and the actor playing her father is the decommissioned Peter Abernathy (Louis Herthum). Also in attendance is the other decommissioned host who had milk pouring out of his bullet wounds.

From there, Dolores goes into the barn where she at times sees the Man in Black. After killing the would-be rapist who wasn’t TMIB, Dolores gets shot once, has a glitch of sorts, and then jumps onto a different timeline where she is approached by the same bandit, only to escape. There was a lot to unpack here. 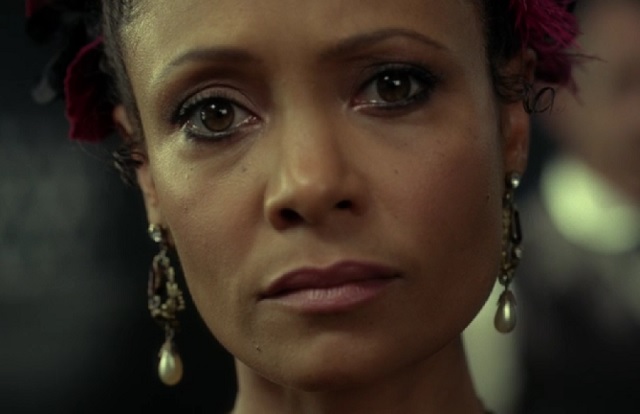 Most of Dolores’ flashbacks involved meeting with Bernard or revisiting past horrific incidents that she was involved in. While those were all traumatizing for her, Maeve’s flashbacks were worse. When she reunited with Teddy (James Marsden), Maeve flashes back to seeing his dead body getting cleaned up in the basement of Westworld. This was jarring for Maeve and one of many instances where the glitch seems to be really impacting her.

This could be key going forward because, as Bernard and Dr. Ford point out, the flashbacks in some hosts are actually directly related to a big piece of information that hadn’t been presented until now: the founding of the park.

This week, viewers learn a lot about the background of the park, the humans who work there, and the technology behind the hosts.

Let’s start off with the background of the park. In the first two episodes, the only park backstory that had been mentioned was an incident that took place some 30 years ago. While it wasn’t specifically referred to as the same incident, we learned that one incident which occurred many years ago was the death of park co-founder, Arnold. 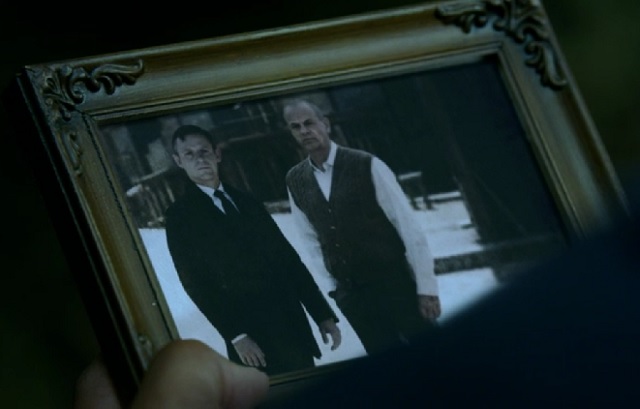 Bernard notices Arnold come up with a couple of the decommissioned hosts, but isn’t sure who it is. That’s when Dr. Ford decides to tell Bernard about his former partner Arnold, who died many years ago in the park. (The way Dr. Ford talks about it, it sounds like suicide.) What’s odd about this interaction is one would assume Bernard, who is in charge of building the hosts, would have been told how the park started much sooner.

Anyway, to learn all of this about the park is crucial going forward. Now we know how it began and that Dr. Ford wasn’t alone when creating the park. The only question remains: are there still remnants of Arnold in the park and could his obsession with consciousness be the reason why the glitch exists in the first place?

However, the backgrounds of the characters mentioned in episode three was even more important.

Bernard’s son had already been mentioned in past episodes, leading many fans to wonder what happened to the son and why Bernard didn’t have his family there. The actual story of his son was brought up rather harshly by Dr. Ford and is then shown via flashbacks from Bernard later on. An interesting point here is that shortly after Dr. Ford describes how a personal tragedy haunted Arnold, Dr. Ford is quick to point out how a personal tragedy is influencing Bernard as well. That’s something to keep an eye through the rest of the season.

Outside of Bernard’s background, we also learned a lot about Dr. Ford, although most of that tied into the background of the park. Dr. Ford had really devoted his life to the park when he was younger, and now he’s seeing the fruits of his labor many years later.

From there, we also learned about how the technology was developed to begin with. Additionally, a couple shots are shown of early testing of the technology, which was interesting to witness and could be important down the line.

In a universe this complex, there will always be new storylines that come up. Here are a couple of the new ones that emerged this week: 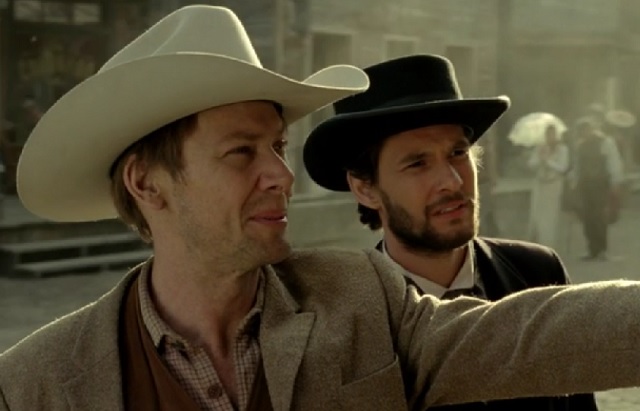 1. After starting off once again with Dolores, the episode moves on to William (Jimmi Simpson) and Logan (Ben Barnes). Rather than jumping around from storyline to storyline, we stick with and look at their entire episode three arc before moving on to other storylines.

Right off the bat, it’s evident that William is starting to become more adventurous. Then again, that’s aided by the fact that he gets “shot” and for a second, it appeared as if he was really injured. That would’ve been quite the curveball if William was actually a host that the writers tricked the audience into believing was human.

Anyway, William eventually drags Logan along with him as he goes on a bounty-hunt adventure storyline. William and Logan appear a couple times, but don’t really make a big impact on the storyline until the very end of the episode when Dolores goes against Bernard’s wishes, strays from her loop, and joins up with William and Logan somewhere in the wilderness. Where their adventures take them should be intriguing now that they have one of the major characters of the show, Dolores, along for the ride with them.

2. After the first scene involving William and Logan, Teddy appears. Early on, we see recreations of his first couple episodes where he meets up with his love interest Dolores. But later on, Dr. Ford is shown reprogramming Teddy for his new storyline where he chases after his former acquaintance Wyatt.

Towards the end of the episode, Westworld really showed how close it can be to a horror movie for the first time. When Teddy and the female human are hunting for Wyatt, they encounter incredibly creepy natives in the forest. Rightfully so, the female with Teddy looks at them and the first words out of her mouth are simply “Oh, my fucking god!”

As the terrific Joanna Robinson points out in her theory recap on Vanity Fair, the creatures Teddy encounters are possibly already dead and are “reminiscent of Lost’s Smoke Monster.” How they come up again and what Teddy’s new storyline with this horror spin does for the show is curious. 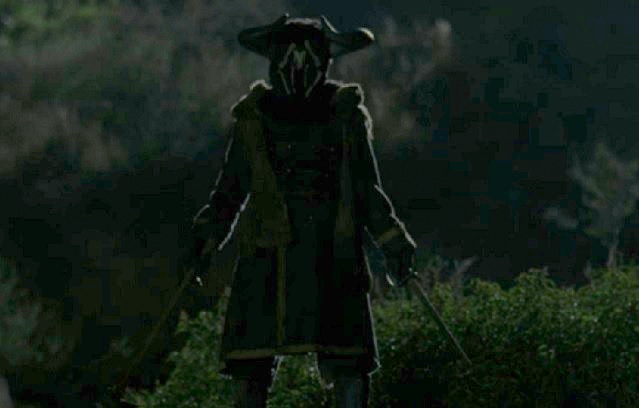 Overall, “The Stray” really took it up a notch compared to the first two episodes of the series. While a lot more was cleared up for viewers, a ton of curveballs were thrown as well. The glitch became more prominent as some of the hosts truly began to take a major step towards human consciousness. At the same time, the show as a whole really began to take on a horror vibe.

There are two key questions I had after finishing this episode that I’m craving to have answered: “What is Dr. Ford’s ultimate goal with the park?” and “What impact will this horrific glitch have on the park as a whole?” While both of those questions were brought up in the first two episodes, the way storylines unfolded in “The Stray” really ramped it up as the glitch wreaked havoc on new employees and Dr. Ford began to show his true colors.