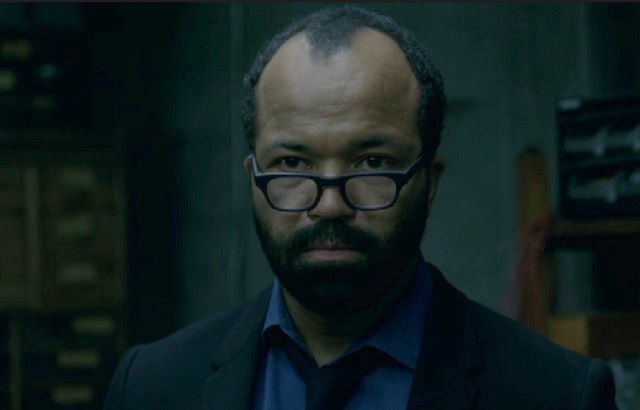 In the previous episode of Westworld, Maeve’s intelligence was raised as high as it could go. During episode seven, “Trompe L’Oeil,” the show went where it had never gone before, blasting open storylines and confirming theories viewers had been waiting for weeks to have solved.

Westworld takes a lot of twists and turns every week and part of the reason why is the different real-life and fictional narratives that run concurrently throughout. As a result, if one storyline ramps it up a notch, other storylines will likely be impacted. That’s exactly what started this week starting with Bernard.

The episode begins with Bernard in a hospital room with his terminally ill son, Charlie, at the time of his death. The two seemed to be having a normal father-son conversation in which Bernard is trying to comfort Charlie. However, after a couple minutes of what seemed like a nice, happy moment, Charlie lapses and eventually passes away. This positive moment is strong evidence against the Bernard is a robot theory that is eventually confirmed just 50 minutes later. 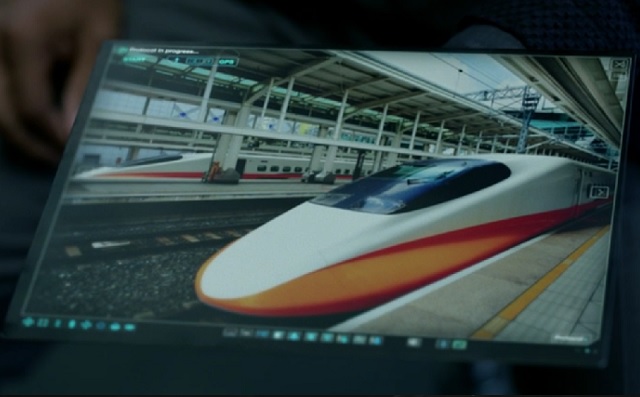 From the hospital, we go to what one can assume to be the behavioral level of Westworld’s management complex. Here, we’re given more evidence to believe that Bernard is, in fact, a human and not the host that he is proved to be at the end of the episode. Bernard is working with the bandit Hector Escaton and going through some of the host’s past experiences. The two discuss what Hector encountered with a recent guest who talked about bringing part of Hector home in his carry-on to mount on the hood of his car. Later, Bernard shows Hector pictures of advanced technology that he can’t see.

The point of this scene is to demonstrate to the viewers how the internal programming inside the hosts works. They are programmed so that when guests talk about the world outside the park, they simply ignore it. This idea was brought up by Logan and William a couple weeks ago in front of Dolores and driven home during Bernard’s discussion with Hector. On top of driving that point home, the writers used this as another opportunity to convince viewers that Bernard was, in fact, a human because he could see and understand what the hosts could not.

Bernard was truly front and center in this episode and that point is emphasized when he is confronted by Theresa. In a quasi-ironic manner, Theresa is basically telling Bernard his behavioral department needs to behave and work better, all while Bernard now knows what Theresa is really up to, thanks to Elsie’s discovery last week.

This leads us to Theresa’s conversation with Charlotte after asking for Hector from downstairs and having a little slumber party . Here, Charlotte blows open the collusion plot by bringing up how Theresa’s acts of espionage are actually not a rogue act. Instead, the Delos board wants the information to be smuggled out of the park so that when they force out Dr. Ford, he can’t wipe away all the work he’s done and make the technology unavailable. This was an interesting twist that I didn’t see coming. 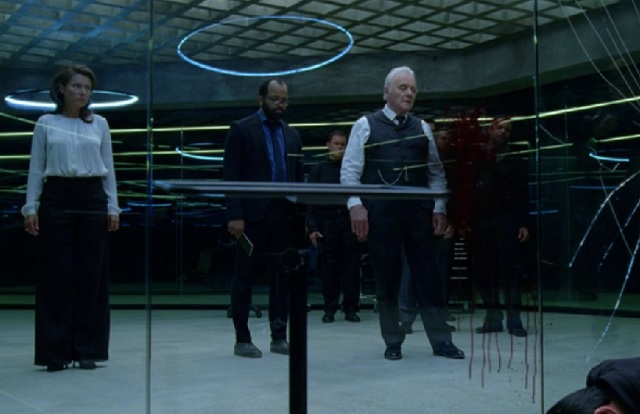 Next, the story moves to Maeve, who starts off by demonstrating her new “bulk apperception” skills and begins to chat off-script with Clementine, only for her right-hand woman and everyone in the saloon to freeze. To Maeve’s surprise, technicians come in to take Clementine instead of her. She’s brought to the company building where she is put on display in front of Charlotte, Theresa, Stubbs, Dr. Ford, and Bernard. Here, Charlotte and Theresa’s colluding is put on full display as Clementine kills the other host, fails to listen to Stubbs’ commands, and is then shot and killed.

This scene was major because it showed a host rebelling and resulted in the firing of Bernard. At first, it looks as if Bernard was truly fired as a result of Charlotte and Theresa’s colluding. On top of that, it also seemed at the end of this scene like Dr. Ford may be on his way out soon, only for all of that to come crumbling down later on.

After a week off, Dolores, William, and Lawrence appeared once again. The trio is still on the train through the park and arrives in Ghost Nation territory. This part of the park is where Lawrence says the most vicious tribe lives, and that point is made evident by the severed heads on spikes as the train rolls through the valley. Later, Dolores and William have a major scene that at first watch might simply be about William’s life back home, but instead is much more. Eventually, the two have a peaceful discussion about Dolores’ paintings, during which the train slams on the brakes and the entire group on the train is confronted by the Confederados.

This leads to one of the biggest gun scenes in the entire series. At first, it looked like the Confederados gain the upper hand with their gatling gun. However, that’s not the case as Lawrence sends his former right-hand man filled up with explosives outside, only to blow him up and confuse the Confederados. The Confederados then chase after Lawrence and company, killing everyone except for Lawrence, William, and Dolores, who are spared when the Ghost Nation Indians ambush the Conferderados. After they escape, William and Dolores encounter the canyon Dolores had just painted and part ways with Lawrence to presumably track down the entrance to the maze. 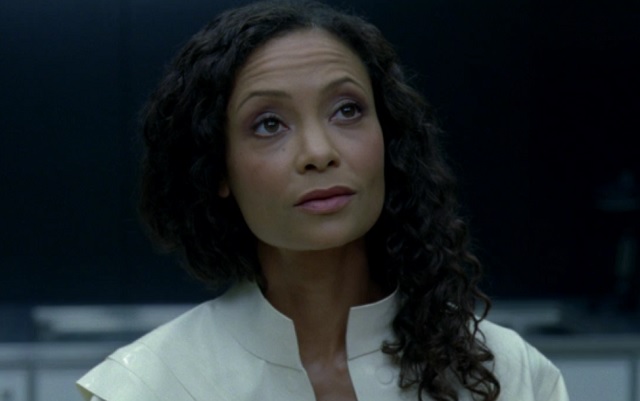 Back to Maeve, she is woken up by Lutz and requests to see Clementine. Lutz eventually says yes and takes her to a different area, only for the two of them to see Clementine go through a lobotomy. The results terrify Maeve and may have been the reason why she confronted Lutz and Sylvester with a massive request. Eventually, she talks to the two of them about her ultimate goal: escaping. Despite everything Sylvester says, Maeve is determined to get out.

“Surviving is just another loop. I’m getting out of here and you two are going to help me,” Maeve said. She later added “You think I’m scared of death, I’ve done it a million times and I’m fucking great at it. How many times have you died? Cause if you don’t help me, I’ll kill you.”

So it’s clear now, Maeve’s ultimate goal is to get out of the park and she’ll do whatever she can to make that happen, even though it’s a suicide mission, as Sylvester points out.

Again, however, “Trompe L’Oeil,” is mostly about Bernard. He confronts Theresa and tells her about Dr. Ford’s unmonitored hosts. Theresa tries to tell Bernard it’s not worth pursuing, due to his recently updated job status, only for Bernard to turn things back on her in regards to the satellite issue. He then takes her to the cottage where Ford’s family is and things get ugly fast. 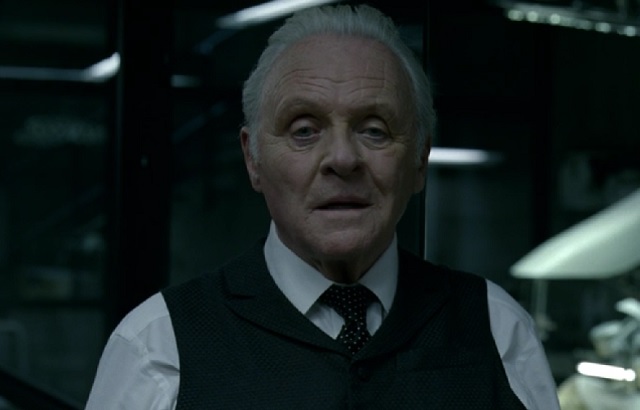 As they reach the cabin, the writers wanted to make it clear once again how hosts can’t see certain things they are programmed not to see. Bernard makes this point by saying that’s how no hosts have discovered the cottage. Theresa then inadvertently makes this point as well inside when she mentions the door and Bernard simply says “what door?”

(Side note: whether you knew about the “Bernard is a host” theory or not, Bernard saying “what door?” while looking the complete wrong way and confused should’ve set the alarm bells off that Bernard was, in fact, a host.)

Bernard and Theresa go downstairs and discover Dr. Ford is making more hosts. Theresa eventually uncovers the old plans Dr. Ford had for some of the original hosts. This is where the big reveal comes. Theresa shows Bernard a drawing of another host that Bernard can’t see, only for the camera to eventually point towards the drawing of BERNARD AS A HOST. THAT’S RIGHT, BERNARD IS A HOST.

Dr. Ford eventually appears out of thin air, Anthony Hopkins once again proving he’s a bad ass, saying he needs the blood sacrifice that was mentioned earlier, and tells Bernard to kill Theresa. What does this mean? Well, the board is on Dr. Ford’s side and he’s not going anywhere.

With the “Bernard is a host” theory confirmed, one other major theory still remains up in the air: Whether or not William is The Man in Black 30 years in the past/two-timeline theory. 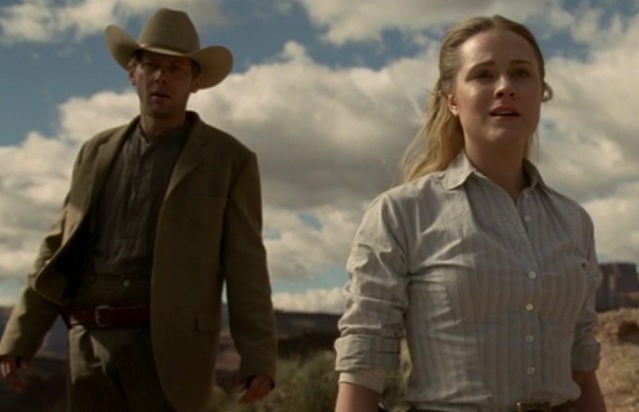 The basis of this theory is that Westworld is operating on two timelines, with one being the present (TMIB, Bernard, Dr. Ford, Theresa, etc.) and the other being 30 years in the past, shortly after Arnold’s death, which only really involves Dolores, Lawrence, Logan, and William. There have been lots of clues dropped as to why this theory is real and one of the biggest came during that quick scene where Dolores and William finally relieved the sexual tension.

Before the two sleep together, William talks about the books he would read as a child…

Thank you and good night.