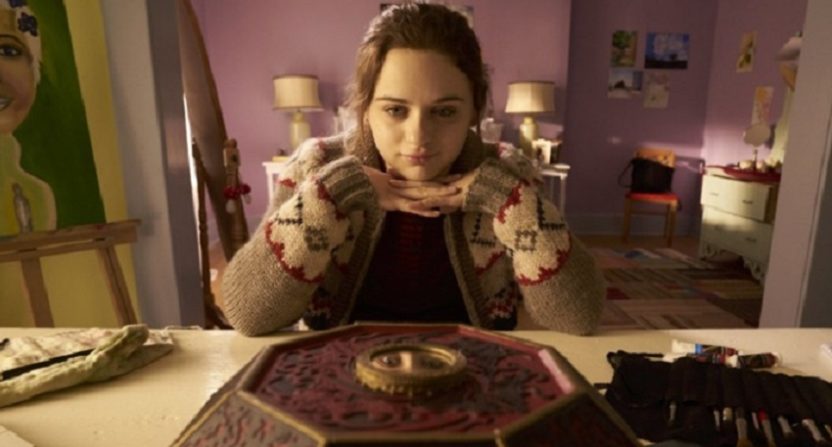 Coming out with a summer horror movie is typically a bold strategy as multiple blockbusters fight for box office supremacy. Insidious did it with great success and the hope was that Wish Upon would follow in its footsteps.

Joey King (Wish I Was Here, The Conjuring) plays Clare Shannon, a teenage girl who has faced a lot of adversity in her short life. Specifically, she witnessed her mother kill herself (not really a spoiler, it happens in the first five minutes). Her father, Jonathan Shannon (Ryan Phillippe), is a bit miscast in his role as he tries to guide her through high school. He plays a trash scrapper and a jazz musician. That combination is just as weird as it sounds. The movie doesn’t pass up an opportunity to show him digging around in the trash or playing his saxophone. It’s weird.

Given the father’s scrapping proclivity, he comes across a box that he finds in the trash. This box, however, has unimaginable powers as well as having Chinese script on the box. What Clare soon finds out is that the box grants wishes. It doesn’t matter how big or small they are; those wishes get granted. The problem becomes that for every wish granted, something else in her universe gets taken away.

The premise itself for the film isn’t terrible. In fact, for a horror film, it gives a big canvas for the movie to work with. Unfortunately, the movie doesn’t break any new ground and delves into more of a Final Destination remake than anything else.

As a PG-13 film, you get very little free reign in the gore and horror department. But too often, the film feels like it doesn’t even try. All deaths are veiled in one way or another and the only real suspense is around close calls that become all too predictable. It is a shame with Phillippe and King involved that the movie had two good actors who have previously done well in the genre.

Even horror favorites like Shannon Purser (Barb from Stranger Things) and Sherilyn Fenn (Twin Peaks), who play Joey’s friend and neighbor, get wasted in roles that get passing attention.

Tonally, the movie switches way too much and is paced haphazardly. The idea of a teen being self-indulgent with their wishes isn’t a bad idea in thought. In practice, it could have been explored and extrapolated, but they decided to dance around the subject too much. The consequences were low stakes and made the film feel all the more cheesy.

Ki Hong Lee (Unbreakable Kimmy Schmidt) plays Ryan Hui, Joey’s love interest and navigator of the box as they try to rid themselves of it and its consequences. There is fun energy between the two of them, but the pairing is nowhere close to saving the film.

The filmmakers try to add additional intrigue to the movie by throwing in a couple of twists at the end and sadly, like everything else during the 90-minute run time, it was predictable.

Unintentional laughs can be had when the movie is incredibly tone deaf. Phillippe randomly playing the saxophone and King referring to girls as a male secretion will elicit “what the f***?” laughs. One moviegoer in my screening even fell asleep during the climax of the film.

There is talent in the movie and there is talent behind the camera with John R. Leonetti (cinematographer of The Conjuring and Insidious), which only makes Wish Upon all the more disappointing.

As blockbuster after blockbuster comes out in July, passing on this stinker is in your best interest. I wouldn’t wish this movie on my worst enemies.