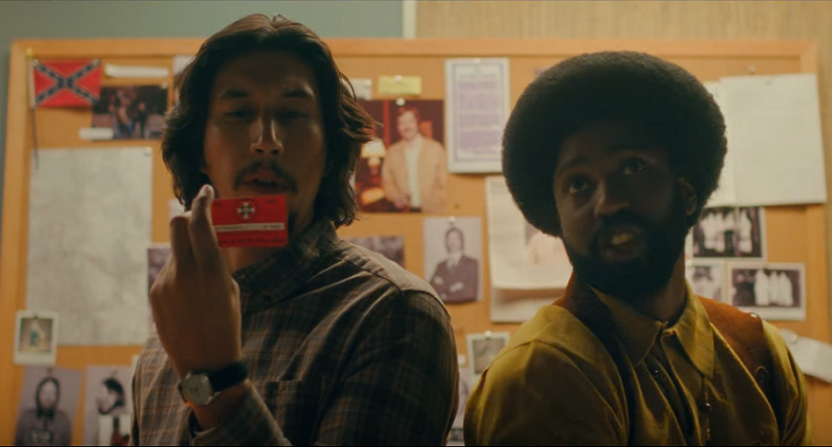 Before Jordan Peele, Barry Jenkins, John Singleton or Ryan Coogler, there was Spike Lee. Lee was among the first superstar African American directors. He ushered in a new type of filmmaker at a time when not many black voices were heard.

Lee raged against the Hollywood machine while making movies, the likes of which we had never seen. His latest, BlacKkKlansman, continues in that tradition even though this wasn’t originally his project.

Peele — basking in the considerable entertainment clout he now wields as a result of the financial and critical success of Get Out — was slated to director this film. But strapped for time, Peele asked Lee to take over.

BlacKkKlansman is based on the true story of an undercover African-American police officer who infiltrated the KKK in the 1970s. Its roots come from memoir of that police officer, Ron Stallworth. This movie is not intended to be a period piece, but rather to show a connection between what happened in the past and what is happening in the present.

“Spike said from the very beginning that really is the overall theme of the movie. He did not want the movie to be a period piece,” BlacKkKlansman co-writer Kevin Willmott told The Hollywood Reporter. “He wanted it to play out in a contemporary way. The choices you make are choices that connect to the 1970s in the movie but also connect to today. That’s the thing that really makes the movie work and what Spike likes about the movie.”

This collaboration between Lee and Peele is a marriage of the old guard and new blood. Lee is 61 years old, while Peele is 39. It feels special because without Lee there is no Peele. Some consider Lee to be the Jackie Robinson of modern-day black directors.

Considering Lee’s contributions to the industry, he’s never gotten his proper due. Lee has received only one feature film Academy Award nomination: Best Original Screenplay for Do The Right Thing (1989). (He also received a Best Documentary nomination for 4 Little Girls (1997), which chronicled the bombing of a church during the Civil Rights moment.).

You can make a strong argument that Lee deserved Best Picture nominations for Do The Right Thing, Malcolm X (1992) and 25th Hour (2002). He did receive an honorary Oscar from the Academy of Motion Picture Arts and Sciences but that doesn’t get the same kind of fanfare. Perhaps, he’s been shut out because of his battles with a Hollywood that still struggles with diversity.

According to a recent study from USC’s Annenberg Inclusion Initiative, there’s been no significant progress in the representation of women, people of color, LGBT characters, or characters with disability in movies over the last decade.

Lee has been pleading for diversity for decades. And despite his accomplishments, he’s faced challenges when it comes to making movies. He’s relied upon unconventional means, like Kickstarter. His 2015 release Chi-Raq was Amazon Studios’ first original film. Lee has never enjoyed the type of power and influence that the current wave of black filmmakers have today.

Of course, Amazon, Netflix and crowdsourcing didn’t exist during the start of Lee’s career. Many fledgling directors have stories about maxing out their credit cards just to make movies. For Lee, struggle has always been real.

New platforms and innovations are nice, but the fundamentals of storytelling haven’t changed. You have to be able to emotionally move people. And occasionally, you can even make them think while being entertained. That’s true whether it’s the 1990s or 2018. That’s why Get Out was successful and thought-provoking. That’s also why Do The Right Thing was successful and thought-provoking.

Lee shook up the establishment. Do The Right Thing — his third movie — is on the short list of best films about racism ever made. It delves into the contradictions and complexities of race in America. That seems even more pertinent given the current state of our country.

The moment race is brought up in the entertainment world, the natural reaction of way too many is to recoil or worse yet tune out. People crave escapism. Reality is too real. Unless it’s dressed up as reality TV, which is more cartoonish augmented reality. That’s why there are eight Fast and Furious films, endless science fiction movies, and more comic book sequels, prequels and reboots being churned out. Nine of the top 10 highest-grossing films of this year fall into that category. (A Quiet Place, a thriller, is the only outlier).

Lee’s highest-grossing movie is unlike his rest. It’s a bank robbery caper, Inside Man (2006) – which made $88 million. That’s almost double of Malcolm X’s gross. Both movies starred Denzel Washington. BlacKkKlansman stars Washington’s son – John David Washington. At the age of 34, he just four years younger than Denzel Washington was when he was in Malcolm X.

In Do The Right Thing, Lee uses art to examine racial tensions. In the middle of the summer in New York City, anger boils over and eventually results in a clash that eventually results in a death. Fast-forward to today. It’s not a coincidence that BlacKkKlansman is being released near the one-year anniversary of the ‘Unite the Right’ rally in Charlottesville that led to multiple injuries and a death. Footage of the white nationalist rally is included in this movie.

It might be the perfect time for BlacKkKlansman. There’s an audience for it. Get Out was a transcended hit. Black Panther, the most Afrocentric movie ever made, is only the third film ever to gross $700 million in the U.S. Yes, they were entertainment, but they also addressed racial issues.

People are incentivized to be more socially active than ever before. BlacKkKlansman is only a movie, but perhaps it makes people think about what kind of America they want to live in. These are dividing times, but everyone should recognize that diversity, dignity, and inclusion are what will make America great again.