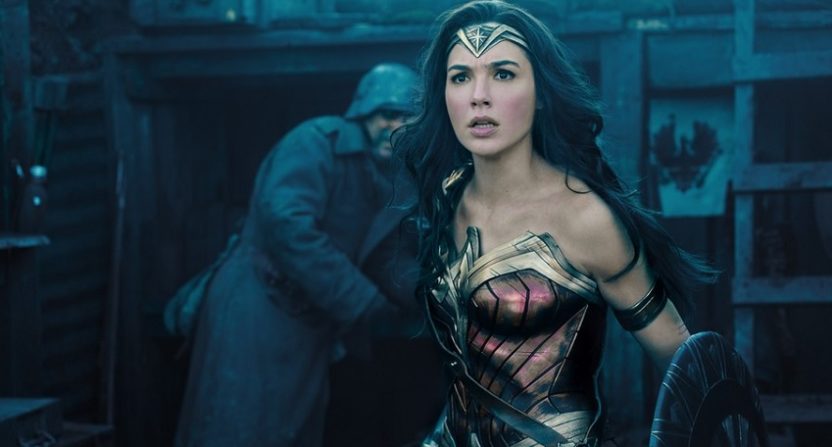 It took three attempts to do so, but the DC Comics Cinematic Universe finally has a good movie. After emerging as the breakout star of Batman v Superman, Wonder Woman gives the Amazon warrior princess the showcase we’ve been wanting to see for more than a year. She just had to get away from the other superhero boys (especially their grimmer cinematic versions) to shine.

Who would have guessed that Warner Brothers and DC Films could have such a difficult time figuring out that a superhero movie needs a main character who is likable, aspiration and compelling, rather than dark and traumatized? Sure, that works for Batman. But part of the mistake WB and DC have made with their movies is applying that approach to heroes who are supposed to be brighter and more hopeful, like Superman.

But Wonder Woman benefits from having a director and writer who truly understand the character, her place among the other DC characters and her place in the culture. In interviews promoting the film, Patty Jenkins has been candid about the influence that movies like 1978’s Superman: The Movie had on her approach to Wonder Woman. She wanted to make a great superhero movie. Take care of that and there would be no worries as to whether it was a great female superhero film.

Screenwriter Allan Heinberg was already familiar with Wonder Woman, having written a five-issue comic book arc that deconstructed and helped redefine the character for modern audiences in one of DC Comics’ many reboots of its publishing line. He was also an executive producer for Amazon, a Smallville-like Wonder Woman origin series that was developed for The CW in 2012 but not picked up for series.

Jenkins and Heinberg had the benefit of being able to introduce Wonder Woman to movie audiences for the first time without battling comparisons to previous versions of the character on-screen. Yes, there was the Lynda Carter TV series in the 1970s, but affection for that is largely based on nostalgia. (Even those who loved the show and looked at Carter as an icon understand that it was a campy product of its time — that theme song! — and limited by TV budgets.)

A Wonder Woman movie set out to tell the origin story that had never been told before in movies or TV. It didn’t have to suffer by comparison to something that had already been done so well, as Man of Steel faced against Superman: The Movie. This wasn’t an origin story being told yet again, like the Marc Webb/Andrew Garfield Spider-Man films attempted to do so soon after the Sam Raimi/Tobey Maguire movies already got it right. Batman v Superman suffered from that as well, showing Bruce Wayne’s parents being murdered for the third time in a movie — and many more, if you count TV shows and cartoons.

It’s so easy to rip on Batman v Superman for how badly the film portrayed its lead heroes and crammed multiple narratives into one story to set up an entire cinematic universe in one movie. But let’s give it credit for one thing: The movie introduced Wonder Woman and showed what she could do, whetting the appetite for her standalone movie. Zack Snyder proved that a modernized version of the character, one who was a ferocious warrior and a shrewd strategist, could work.

That cleared one hurdle for Jenkins and Heinberg. Not everyone who sees Wonder Woman will have seen Batman v Superman, but a large chunk of the audience — especially the comic book and superhero movie fanboys — has already seen her and know what Gal Gadot is capable of doing in the role. The character of Diana Prince already being introduced allows for a framing device that nods toward what’s to come without having to set up other movies or get bogged down with cameos and winking references. Wonder Woman is allowed to be a complete, standalone story that doesn’t necessarily feel like an incomplete chapter in a larger narrative.

Getting a movie all to herself also provides Wonder Woman with the opportunity to show what makes her so special as a superhero. She didn’t suffer a childhood trauma that left deep psychological scars. She wasn’t orphaned by a tragedy or disaster. She didn’t gain her superhuman abilities by a freak accident. Diana of Themyscira was raised and trained to be the best example of her people. She leaves the Amazons and their island of paradise to help those who can’t help themselves. She tries to end war and suffering, simply because that is the purpose instilled in her.

To some, that might make Diana a boring, borderline cheesy character. But again, Jenkins and Heinberg know what makes her so unique. The story begins with Diana as a little girl, aspiring to be like the warriors who have raised and taught her. But her mother, Queen Hippolyta (Connie Nielsen), wants to protect her from learning the arts of warfare, hoping that she’ll never need such skills. Diana is stubborn, however, and Hippolyta’s best warrior and general, Antiope (Robin Wright), is all too willing to train and prepare her for the battle that might someday come.

That battle does indeed come when the Amazons’ idyllic paradise is invaded by a German fighter plane that’s been shot down and crashes near the island shore. Diana rescues the pilot, Steve Trevor (Chris Pine), who turns out to be a British spy trying to get secrets of a new weapon to his superiors in hopes of stopping the Germans’ attempt to kill millions of soldiers and innocents. Diana interprets the Germans’ thirst for war and conquest as a sign that the Greek god of war, Ares, has corrupted mankind — the creation of Zeus — and intends to destroy it. Fighting Ares is the Amazons’ sole purpose, and thus Diana decides to accompany Trevor back to Europe to vanquish Ares and end the war.

Naturally, that would sound crazy to anyone actually involved in the war. But Trevor has seen the Amazons in action and been subject to their lasso of truth. (Fighting the urge to tell the truth is one of the more intriguing interpretations this film creates. It’s not like being hypnotized, which is how many writers have portrayed it previously.) He knows that Diana believes in her purpose. She’s completely earnest in her intention to save mankind from itself and show them that there is a better way.

Portraying that earnestness is but one of the many aspects of Diana that Gadot conveys so wonderfully. She truly believes she can end war because it’s what she’s been taught from childhood. And she can’t understand why those who lead armies and nations don’t simply make the right decisions for their people. You fight against what’s wrong and help those in need. There’s nothing else. Of course, the world is nowhere near that simple and humanity is a far more complicated beast. But that doesn’t stop Diana from striving to achieve her objective.

If you were skeptical of Gadot carrying a film and portraying an iconic character after playing supporting roles in several Fast and Furious movies and working as a model before that, set those worries at ease. She commands the screen and is easily the most compelling person to watch every time she appears. As Diana, she can be a fierce warrior and comforting diplomat with a smile that would make anyone pause. She’s delightfully naive about the world — and the movie derives plenty of humor from Diana being the proverbial fish out of water — yet doesn’t care about niceties and bureaucracies that might interfere with her mission.

But Pine might be the not-so-secret ingredient that helps make this movie even more resonant. Steve Trevor has always been a tricky character because he has to be the regular man with whom an Amazon princess falls in love. Yet Pine makes it believable that someone like Diana could admire him and eventually develop feelings for him. He’s dedicated to helping end the war and defeat the Germans, respectful of his superiors, deeply loyal to his friends, and believes in what Diana is trying to accomplish. He’ll do whatever it takes to help those who can’t help themselves. Of course, he’s also ridiculously good-looking. If Trevor is supposed to be the best of us, Pine does a damn fine job of portraying that.

Gadot and Pine have great chemistry that makes a great on-screen pair. That, along with the rest of an excellent cast, helps Wonder Woman push through some of the weaker parts of the story and a somewhat clumsy path to the true villain of the piece. But it’s such a pleasure to watch Gadot embody this character and giving us a superhero that feels so fresh in her motivation and presentation. She truly is a heroic figure, not someone who finds him or herself developed into a hero under adverse circumstances.

Wonder Woman remembers that these sorts of stories are supposed to be aspirational, fantasies that portray what we can achieve at our best. Even more importantly, Jenkins and Heinberg remember that these stories are supposed to be fun — and funny — providing a sense of adventure and triumph, with maybe a few jokes that remind us how outlandish all of this can be along the way. A great superhero gets the movie she deserves and we as a culture get the superhero movie that we’ve been waiting for. Bravo.