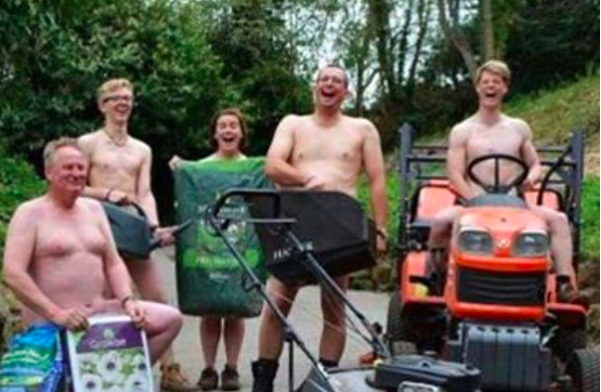 The month of May holds one of the most influential holidays on the calendar.

No, it’s not Cinco de Mayo.

It’s not May Day.

It’s not even Mother’s Day.

You see, every May we celebrate as a nation, no as a world… “World Naked Gardening Day.”

I don’t know about you, but the thought of gardening in the buff sounds like one of the worst nightmares you can ever experience.  First of all, I don’t care what you say, yard work is not fun.  It’s excruciating.  It’s torturous.  It’s hot.  There’s bugs everywhere.  It’s the antithesis of what blogging is all about – namely sitting in the comfort of a temperature-controlled climate on your butt all day.  Second of all, there’s the incredible sense of shame.  Shame is such an underutilized force in today’s society.

But the celebration of World Naked Gardening Day got me thinking about all the other weird days that are on the calendar.  Apparently it’s much easier than you thought to get a day dedicated to… something.  Why, you could do it right now!  (I’ve already got my application for National Talk Like Bill Walton Day drawn up in a first draft.  IT’LL BE THE GREATEST DAY IN THE HISTORY OF WESTERN CIVILIZATION!  A TRULY MOMENTUS AND MONUMENTAL OCCASION THAT WILL BE REMEMBERED THROUGH THE AGES!)

So after meticulous research (a.k.a. 8 minutes of Googling) here are the most ridiculous days we celebrate in this funny thing called life…

There’s no Christmas gift as uninspiring as fruitcake.  So instead of letting it sit in your freezer for several months, or maybe even years, why not do something productive with it and see how far you can throw it?  I demand that this be part of the NFL combine next year so we can get Mike Mayock to analyze fruitcake tossing mechanics.  You’re telling me you wouldn’t want to see Cardale Jones launch a fruitcake into the air?

National Nothing Day was founded so Americans could have a day where they didn’t have to celebrate or observing anything, which is a wonderful thought because it does get pretty confusing and tiring to remember all of these days.  But then again… doesn’t the existence of National Nothing Day mean we’re celebrating it?  If we’re observing nothing, are we really observing something?  Can we get Stephen Hawking on this?

I think this one was stolen from SpongeBob SquarePants.

Barbershop Quartets only get ONE day?  C’mon, if there was anything deserving of an entire month, it’s barbershop quartets.  I’d also settle for the addition of National Be Sharps Day.

I have no idea if this is intentional or not, but the idea of having No Socks Day and Lost Sock Memorial Day back to back is nothing short of inspirational.  May our lost socks never be forgotten.

* pauses for a moment of silent reflection *

Put A Pillow On Your Fridge Day – May 29th

This sounds like the weirdest thing you can do, but apparently the tradition dates back several generations since before modern refrigerators as we know them were first manufactured.  The custom is supposed to bring good luck and wealth to your household… alternatively it’s a genius idea to make sure you’re as cool as BOTH sides of the pillow.

Maybe the most iconic of all of the random days on the calendar and the one that has gained the most momentum in popular culture these days.  And why not?  I mean, who doesn’t enjoy people talking like a pirate.  The next time you get depressed over our current election cycle, just picture your least favorite candidate talking like a pirate and I guarantee you it’ll help ease your crippling depression that our country will be blown off the map in less than two years.

Or as CNN calls it, every day of the year.