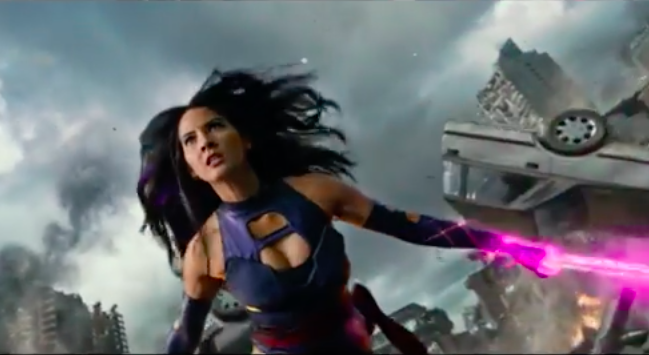 While commercials for snacks, cars and bowel-related pharmaceuticals dominated Super Bowl 50 discussions (and lists), there were plenty of ads for upcoming movies peppered throughout the game as well. The Super Bowl has become a premiere destination for studios to showcase their big blockbusters, and this year was no different.

Some of them featured footage we’ve gotten well accustomed to by now. Some gave us glimpses at story reveals, characters and special effects we haven’t seen before. And a few were the first time we’ve actually seen any footage at all.

Let’s dig in to these ads to see what we have to look forward to in cinemas in 2016.

What Is It: Deadpool

What’s It About: Ryan Reynolds is a genetically-modified mutant who can crack insults as well as he can crack skulls.

Best Part: “I always wanted to be a professional athlete…cause I wanted to have children in cities all over the world.” Typical Deadpool banter and also a legitimate burn.

What New Thing Did We Learn: Nothing, really. It would be hard to show us anything new anyway since Deadpool ads and marketing have blanketed everything (perhaps too much?) already.

What Is It: Captain America: Civil War

What’s It About: The Avengers are torn asunder as Captain America and Iron Man are forced to go head-to-head (with their own teams of superheroes) over a system of accountability for mutants and those with special powers.

Best Part: Iron Man’s suit coming out of his watch, and his iron hand blocking a bullet, much to Tony Stark’s surprise.

What New Thing Did We Learn: We got to see both “factions” in full, including the reveal of where Ant-Man stands (with Captain America).

Did This Ad Get Us Excited?: Indeed, as it’s becoming abundantly clear this is basically an Avengers movie with a different name.

What Is It: 10 Cloverfield Lane

What’s It About: The plot appears to revolve around Mary Elizabeth Winstead being taken to an underground shelter after a car crash where creepy John Goodman tells her they can’t leave because of…something. Eventually, she leaves. And something is out there. The title and the fact that J.J. Abrams is behind this seems to imply it’s either a sequel to, or exists in the same universe as, the monster-movie Cloverfield.

What New Thing Did We Learn: While most people have been pretty sure we’re going to see a Cloverfield monster, the end of the ad seems to back up that idea pretty strongly. Or maybe that’s just what J.J. wants us to think…

Did This Ad Get Us Excited?: Definitely, as we’ll take any details we can get about this secretive project.

What Is It: The Jungle Book

What’s It About: The classic story of Mowgli comes to life again in this live-action/CGI Disney flick.

What New Thing Did We Learn: Much of the advertising so far has played up the perilous and scary aspects of the story. This ad reminds us that there’s a lot of fun to be had here as well.

Did This Ad Get Us Excited?: Absolutely. Now we know how fleshed-out and big the story will be and we’ve gotten a taste of all the characters with their familiar voices (Idris Elba, Bill Murray, Christopher Walken).

What Is It: Jason Bourne

What’s It About: Matt Damon is back as the titular assassin who spent three movies remembering who he was before letting Jeremy Renner have a go and now returning to remember who he was once more.

What New Thing Did We Learn: That Jason Bourne’s into Fight Club now.

Did This Ad Get Us Excited?: Mostly? Matt Damon’s Bourne flicks rarely disappointed and it’s sure to be better than Bourne Legacy, but you have to start wondering when they’ll have squeezed the last remaining drop from this stone.

What Is It: Teenage Mutant Ninja Turles 2: Out Of The Shadows

What’s It About: Teenage mutant ninja turtles. What part of that don’t you get? It’s the sequel to the previous Michael Bay-produced origin story that was a big colorful jumbled mess of a movie.

What New Thing Did We Learn: We got our first look at Krang, the alien super-villain that has heretofore never appeared in a TMNT movie.

What Is It: Independence Day: Resurgence

What’s It About: It’s the Will Smith-less sequel to the 1996 summer blockbuster Independence Day that you never knew you wanted.

What New Thing Did We Learn: It looks like London won’t be around to enjoy the celebration when we eventually kick the alien’s butts.

Did This Ad Get Us Excited?: Not all that much. The original trailer helped explain how we got here a lot better. This was more just a collection of images meant to provide scale, much like they did in their Super Bowl commercial in 1996. It remains to be seen, however, whether or not the film will be as fun as the original.

What Is It: Alice Through the Looking Glass

What’s It About: It’s the sequel to Tim Burton’s Alice In Wonderland with a new director but all of the familiar faces (Helena Bonham Carter, Johnny Depp,  Mia Wasikowska), not to mention a very familiar but dearly-departed voice (Alan Rickman).

Best Part: Realizing the world no longer wants to just watch Johnny Depp mug the entire time, we get glimpses of Sasha Baron Cohen’s sinister Time to help out on all that scenery chewing.

What New Thing Did We Learn: That Alice is going back to Wonderland after making a billion dollars, which we probably already knew.

Did This Ad Get Us Excited?: Meh. Another one of those “if you liked it, you like this” scenarios. Judging by the box office of the original, there’s plenty of people in that camp.

What Is It: X-Men Apocalypse

What’s It About: An ancient mutant named Apocalypse (funny, that) reappears and wants to wreak havoc on the planet (as a guy named Apocalypse is wont to do). Only The X-Men can stop him and save the day.

Best Part: Psylocke (Olivia Munn) has no problem cutting through a car.

What New Thing Did We Learn: Quite a few things. Apocalypse seems to live up to his name in terms of destruction. And punching Apocalypse is a pretty dumb idea.

Did This Ad Get Us Excited?: For sure. The initial trailers felt a bit lackluster and small in scale. Now we’re getting a chance to see how big the action is and it feels like it’s going to be the kind of X-Men movie we’ve been waiting for. Adamanteum blades crossed.

What Is It: The Secret Lives of Pets

What’s It About: Like the ad says, “Ever wonder what the pets we love do when we leave?”

What New Thing Did We Learn:

Did This Ad Get Us Excited?: If you’re a parent, sure. The film has a good pedigree (pun intended) as it comes from the people behind Despicable Me and The Minions. It looks silly and fun and like the kind of thing kids and stoned adults will enjoy.