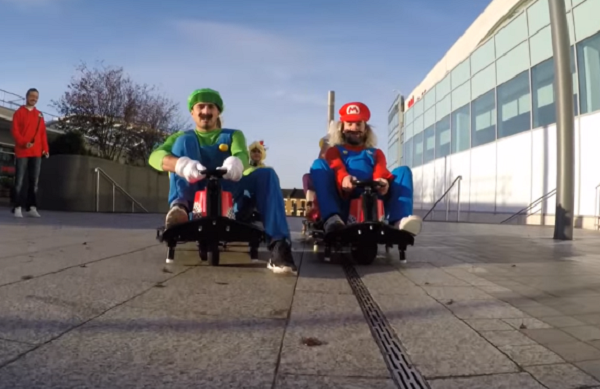 For about a month now, rumors have been swirling that the XFL could be making a comeback. On Thursday, those rumors became reality.

The move is interesting as the XFL already failed once. With today’s NFL ratings dipping possibly in part due to the severity of the league’s injuries, bringing back a league that thrived on brutal hits is an interesting move.

With this news, it got me thinking: what fake sports should have professional leagues created? There are plenty of options to choose from, but three stuck out to me: BASEketball, Mario Kart, and Quidditch.

Before I get into the specifics of why this trio should be brought to life on a professional level, let me get this off my chest: I know that people play BASEketball recreationally, I know Mario Kart does exist on a tourist style go-kart level, and while people do play Quidditch, the wizard version is physically impossible.

While these three are played in some way, they were never really played on the professional level of the XFL with major endorsement and TV deals, nor did any of them achieve the fame the XFL did during its peak. If any of these three did however, what’s to say that they wouldn’t have taken off?

The infamous basketball and baseball hybrid was introduced to the world on a grand stage in the movie of the same name back in 1998.

In the movie, a professional league does exist and thrives with teams all over the United States and a playoff bracket that dwarfs March Madness. The movie ultimately led to people playing this fake sport in driveways all around the country, but never more than that. I even played the sport for weeks before I knew it was based on the movie.

While in the ’90s, a sport like BASEketball may have struggled to take off simply because of how dominant basketball and baseball were and how both sports caused the new sport to be obsolete, the 21st century is a different animal. With the rise of social media and streaming apps and websites, a sport such as BASEketball might actually have a chance.

The sport at its core is pretty ridiculous and the psyche-outs involved in the game are completely silly. It’s because of these two attributes that I think this sport could work today. While it may not achieve the same fame as the XFL once did, certain aspects of it could make it successful on a minor level.

Imagine watching a game on Periscope or even Twitter and seeing a psyche-out sponsored by some small company trying to get its foot in the door. Something like this is realistic in today’s world where people are making over six figures to play video games that are broadcasted on Twitch.

Speaking of video games, the famous Nintendo game is essentially just a cartoon version of real life go-kart racing. The video game has been brought to life in the real world and can be “played” in various places around the world.

It’s also something that could reach a professional level if enough money and time is invested. The video game is still a beloved classic and Nintendo keeps churning out new versions of the original 1992 game. It’s also something that could be pretty simple to recreate on a professional level for the same reasons as BASEketball.

What makes the idea of professional real life Mario Kart even more realistic is the ability to garner sponsorships. Just like with any professional racing circuit, the “cars” used in a real Mario Kart league could feature company logos all over their cars, just like the cars used in the Tokyo video above. On top of that, companies could easily sponsor the different “weapons” in the game.

Star sponsored by Converse (think about the logo)

All of those companies and the one sports team make a ton of money and have the name recognition to help jumpstart a professional Mario Kart league. While some of the technology in the game might not be possible in real life (you can’t really pick up a physical mushroom to make you go faster), there are ways around it.

For example, to pick up a weapon you have to successfully drive over a sensor on the track. Lets say you pick up the thunderbolt, all of the drivers you are facing are told via a headset in their helmet they can’t drive faster than 5 mph for 10 seconds. If they break this limit, they get penalized in some fashion. As for the shells, let’s say you pick up a red shell, whoever the driver is directly in front of you is told via headset he/she must stop immediately in place for 5 seconds to imitate what it’s like to be hit by a red shell in the game.

There are ways to make Mario Kart prfessional and a ton of ways to garner sponsorships to make the new sport profitable.

Yes, this sport is physically impossible to be played the way it was introduced to the world in the Harry Potter novels. However, smart fans of the books have slowly turned it into a realistic sport with a couple of changes.

Out of all of these fictitious sports that eventually became real, Quidditch seems to have the best chance at becoming professional in today’s world for two reasons: it is widely played all around the world at a high level and the universe in which it was created continues to churn out new content on a large scale.

The sport’s massive following has led to teams being created at universities all around the world and even a Quidditch Cup taking place annually in the United States. While the sport has taken off in the United States at the collegiate level, it has yet to succeed on a grand scale at a professional level.

With so many teams around the United States specifically, there is a large talent pool of players who may be interested in playing professionally. Additionally, with the popularity of the sport thanks to the Harry Potter universe always growing, companies might be more interested in sponsoring players/teams/leagues compared to the other fake sports.

Finally, just like with the other sports, Quidditch could easily be broadcast online to communities all around the globe, leading to growing fanbases and sponsorship outreach. Quidditch may have the best chance of the three to become successfully professional on a large scale, all it would take is some money and magic (luck magic, not real/fake magic).