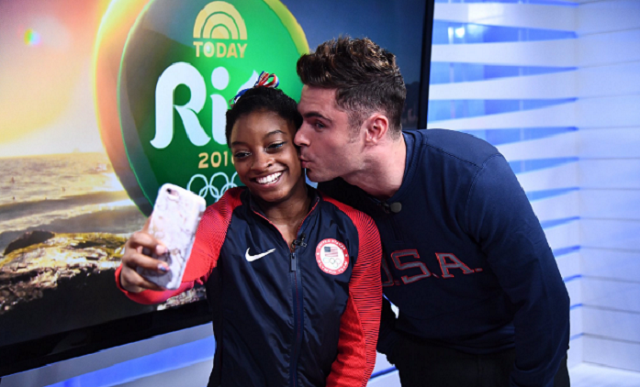 Simone Biles has been living large as America’s latest great gymnast. After a successful run at the Rio Olympics, Biles received the only prize a teenage girl would gush at over more than a couple of Olympic medals, a kiss from Zac Efron.

Biles is the proud owner of a life-sized cardboard cutout of the Hollywood star that is proudly displayed in her room, which she unashamedly admits to kissing it on the cheek at times. On Tuesday, Biles got a kiss on her cheek from the real-life Efron, who is in Rio for the summer Olympics as well. Efron was a surprise visitor for Biles during a segment on The Today Show on NBC.

Biles was in Heaven…

And then got to pose for a picture with Efron, who surprised her with a peck on the cheek…

he kissed me on the cheek just letting y'all know @ZacEfron

proof : had to do a retake bc I thought we were taking a picture then he kissed me instead ❤️ pic.twitter.com/rld33V14qe

Biles has become one of the top Olympic stars from the United States, yet it is refreshing to see such a competitive athlete have a pure moment of joy off the field of competition like this. Biles has earned it. And kudos to Efron for making it happen.