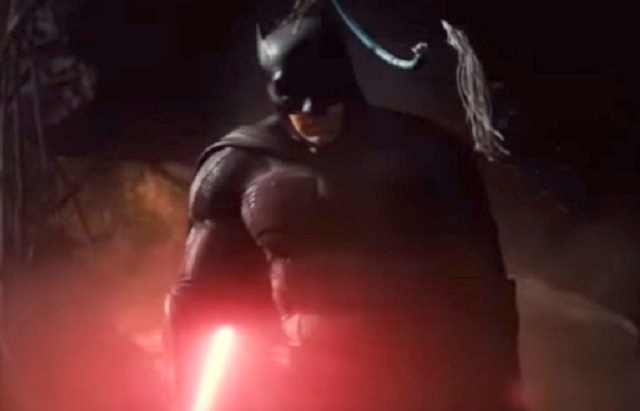 If not, here’s a refresher. Two years ago, Abrams revealed a look at the Millennium Falcon from the Force Awakens set, which revealed a special surprise underneath the fastest hunk of junk in the galaxy. The visual nod is first hinted at by the change in music.

Plenty of other Batman v Superman/Force Awakens mash-ups were traded between the two directors, which we’ll include below. But Snyder apparently thought he needed to pay Abrams back in video form, not just a still image. And he appears to have put quite a bit of work into this, judging from the amount of digital image replacement in this little short. Hey, some guys build model planes. Others play video games. Zack Snyder makes Star Wars mash-ups.

Here is Snyder’s Batman v Superman-flavored tribute to Star Wars (and Abrams), titled — seriously — “Dark Side Knight vs. Super Jedi: Dawn of the Alliance.” That is almost as clunky as Batman v Superman: Dawn of Justice, so this seems to be a style preference for the filmmaker. (Or Snyder is acknowledging the absurdity of that title and steering right into it.)

Kind of cool, right? (Although that original Batman v Superman trailer was kind of boring.) The Death Star and a Star Destroyer visible in the skies over Metropolis. Stormtroopers kneeling before Superman. Yes, there are X-Wing Fighters clumsily inserted into shots, which is reminiscent of George Lucas filling empty screen space with all the digitally-created junk he could in the special editions of the original Star Wars trilogy.

Maybe you’re wondering how we know that Snyder actually made that video. That was my first thought too. The easy answer is that the movie and pop culture blogospheres seem to be going with it. But the better answer is that Snyder posted this clip on new social media app Vero (where he’s also been sharing some photos from Justice League’s production). Others have apparently downloaded the app to keep tabs on Snyder and can vouch for it.

According to movie sites like Slashfilm, Snyder also included a message with the video, which reads as follows:

“Dark Side Knight v Superjedi. In anticipation of Rogue One, I wanted to share a little Star Wars fan film I made after JJ released his Hunka Junk mash-up… long overdue.”

OK, so this means the video is about two years old. That might explain why Snyder didn’t use any other footage from Batman v Superman that might have made this mash-up pop a bit more and feel more fun.

Here’s what started all of this: Snyder tweeting out a photo of Henry Cavill in a Jedi robe, holding a lightsaber.

This one is a little tougher to make out, but it’s R2D2 on the Batman v Superman set, presumably from New Mexico where the Batman “Knightmare” sequence was filmed.

C3P0 as The Dark Knight, looking at the Rebellion signal from a rooftop perch? OK, Abrams — we’ll go with it.

And finally, a rowdy Stormtrooper gets corralled by the Gotham City Police Department. The Rebellion ain’t got nothin’ on the GCPD.

(Hat tip to io9 and Meredith Woerner for compiling all of these into a September 2014 post.)

Somebody at Lucasfilm give Snyder a Star Wars movie already. (Some DC Comics would be happy with that, considering it would take him away from the Justice League franchise.) Maybe he can do that Boba Fett standalone film that’s often been rumored.

Personally, as a Batman fan, I have a problem with the Dark Knight being likened to Darth Vader. (Actually, my biggest problem with this is that Snyder didn’t make it easy to capture a screenshot for our featured image. C’mon, man. Help a blogger out.)

Yeah, I get it. He’s the Dark Lord of the Sith, who was overcome by the Dark Side of the Force when he gave into anger and fear. Arguably, the same thing happened to young Bruce Wayne when his parents were killed and he decided to dedicate his life to being a nightly terror to the criminals of Gotham City.

Snyder might have sold me if he had Jeremy Irons’ Alfred share a scene with Yoda. Two grumpy old mentors, together on screen at last. Maybe that can be his next mash-up.