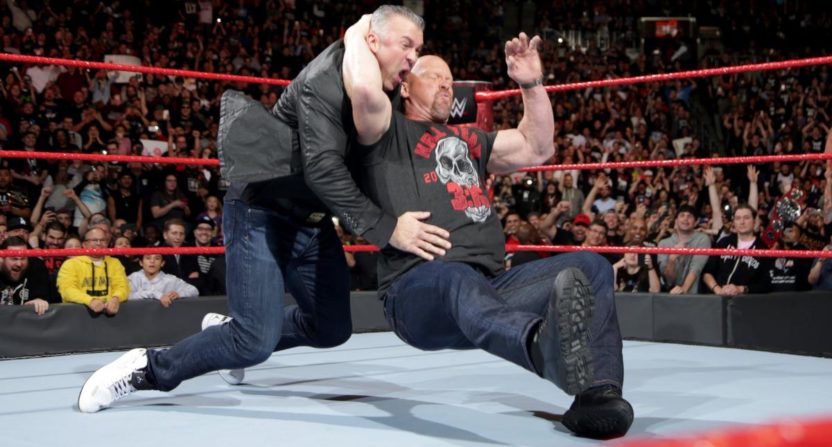 7. Asuka delivered a message for the Royal Rumble

There was an 8-woman tag that was the first match of the night. It was booked in a weird way and sloppy. They went about 13 minutes, had two commercial breaks (usually a match like that will have one) and there was no hot tag finish. Instead, Sasha Banks managed to beat Alicia Fox easily, even though the heels isolated Banks from her team for most of the match. We didn’t even see Mickie James and Bayley in the ring for their team, although apparently they got in during one of the breaks. I don’t get why they booked it that way.

After the match was over, Asuka threw her three teammates over the top to the floor like she might do in the Royal Rumble match. Asuka tossed out Mickie James first, then Bayley and Banks was last. It pushed the idea of every woman for herself at the Royal Rumble.

The match was poor, but the post-match angle was fine. I think what’s hurting the women’s Rumble a bit is not enough women are talking about wanting to win the match, nor are they viewed as a threat. It’s really just Asuka, Nia Jax and others. Give us more of a reason to care, WWE.

Triple H and Shawn Michaels fired up the crowd at the Manhattan Center while dressed in their Degeneration X gear. They were joined by the New Age Outlaws (Road Dogg & Billy Gunn), X-Pac and Scott Hall. The group all did promos, which was fine and the crowd loved it. They were interrupted by Finn Balor, Luke Gallows and Karl Anderson of the Balor Club. Everyone joined together for a “too sweet” moment in center ring, but they were interrupted by The Revival.

The last match of the night was Luke Gallows and Karl Anderson defeating The Revival at the Manhattan Center. It only went about three minutes.

After the match was over, The Revival were destroyed as they took the finishing moves of the DX guys. If you recall last week’s Raw, The Revival trashed legends in a promo so it was obvious this was coming.

I thought the segment was fine, but just another example of WWE relying on nostalgia. I guess you could say the message here was that Degeneration X gave the Balor Club their blessing to use the “too sweet” hand gesture. Other than that, there wasn’t much to it.

9. Doing the event at two venues was a big mistake

Bray Wyatt beat Matt Hardy easily in one of the matches there. This was poorly done too. The match went six minutes and they had a commercial during the match, so that meant only three minutes were actually shown. This was their first televised match since Matt became “woken” a few months ago and they had Hardy lose the match clean without putting up much of a fight? Lame.

The above video shows some clips of stuff from the Manhattan Center with Jeff Hardy joining Matt Hardy in the ring (was not on Raw, although Jeff was backstage at the poker game) and a post-show segment with Miz getting beat up by Seth Rollins. Miz ripping on the fans for cheering him is great too.

I like how the fans thanked Miz for beating Reigns for the IC Title. Do you think that’s going to stop Reigns from being featured heavily? Of course not. That’s why it’s a weird reaction.

The Manhattan Center announce team of Jim Ross and Jerry Lawler were ripped on by fans because some guy took a pic of them apparently sleeping. Ross denied falling asleep.

It appears this site covered their arse
When using the term ‘appeared’ but no one was sleeping.
Absurd to suggest such. https://t.co/ns15DP4Slp

I realize fans are laughing about it because it’s their way of saying the show was bad if these two old guys were sleeping through it, but it’s also disrespectful to Ross and Lawler.

10. Raw was a disappointment considering the high expectations

There’s no way anybody on WWE’s creative team can say they put on an awesome show because it was just average. I’m sure Vince McMahon wants people to tell him that because he’s the man in charge, but this was not the home run type of show a lot of us were expecting. I received a lot of angry tweets from people on Monday night when people read my review of the show and I gave it a 5/10. Most of them thought I was being too nice. Maybe I was because I enjoyed some of the nostalgia, but overall it was a disappointing show.

The way WWE has built the men’s Royal Rumble just seems so off. They have announced less than 15 names so far, they have barely had some of the guys interact and there are barely any promos about the match, aside from Elias/Cena Monday night. They had three hours to really push the match, yet only dedicated about 10 minutes to it. Compare it to last year when you had Undertaker, Lesnar, Goldberg all building it up.

I assume WWE thinks the men’s Rumble match sells itself because people genuinely like it, but the effort just hasn’t been there from a creative standpoint. You can’t even announce most of the names? There have been so few promos about it and there aren’t a lot of rivalries going into it.

The Lesnar/Strowman/Kane segment wasn’t that exciting. I know WWE thinks that Strowman putting Lesnar through an announce table again (something he has done several times in the last year) is going to pop the crowd, but we’ve seen it before. Give us something fresh. Kane certainly doesn’t feel fresh at his age either.

If there’s a lesson here maybe we should lessen our expectations for the next WWE reunion show, which is probably going to be Smackdown‘s 20-year anniversary next year. Better yet, maybe WWE can do a better job of mixing in nostalgia while also delivering a better show that is going to make their current stars look a lot better than this week’s Raw did. It’s not our fault we were excited about it. But it’s up to WWE to deliver a better show than what they did this week.

The Royal Rumble takes place this Sunday night. I’ll be back on Friday with 10 predictions (or maybe more than that) for what I think is going to happen.