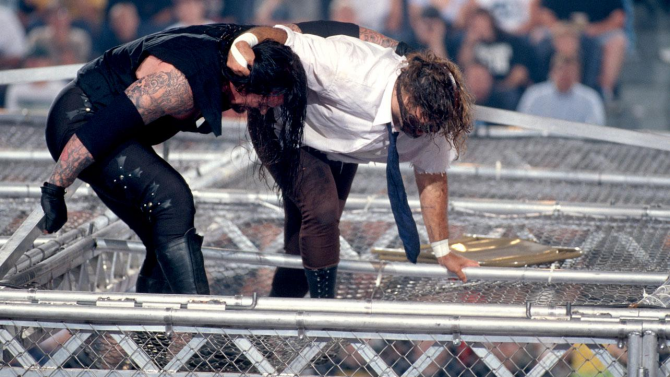 The Hell in a Cell match is arguably the greatest gimmick match in the history of World Wrestling Entertainment. It’s a match where two or more competitors battle inside of a 20-foot-high steel cage with a roof on it. The first Hell in a Cell match took place in October 1997.

The idea is that once you are locked inside the cage, there is no way out. As we’ve seen many times over the last 19 years, people find ways to get outside the cage and when they do, it only adds to the violence of the match.

To get you ready for this year’s Hell in a Cell, I’ve put together a list of 15 of the best Hell in a Cell matches ever. Why 15? Because there’s been 32 of them televised and a lot of them have been great, so I figured it was a good amount to cover in this column. Lucky for you, all of them are available on WWE Network and I’ve provided you with the name of the show as well as the date that it took place, so they will be easy for you to find.

The Undertaker’s name is going to appear on this list a lot because of the 32 televised Hell in a Cell matches, he has competed in 14 of them. Another name you’ll see several times is Triple H because he’s competed in nine Hell in a Cell matches. I think the fact that they were two long-term main-eventers over the past 20 years is why they have been featured in them the most.

What’s interesting about these matches is that most of them featured blood if they took place from 1997 to 2008 when WWE had a TV-14 rating. In 2008, WWE became a PG company and in doing so, eliminated blood from their matches. There are some exceptions, though. Now when they do Hell in a Cell matches, you won’t see people bleeding, but they will still use tables, chairs and other weapons to ramp up the violence during these matches.

Here’s my list of the 15 best Hell in a Cell matches in WWE history.

It’s the most recent Hell in a Cell from this year’s WrestleMania. It probably should have been the last match at the show because I was there and that’s what we were looking forward to the most. Was it a great match from a technical standpoint? Absolutely not, but it sure got people talking when it was over.

With The Undertaker laid out on an announce table, Shane climbed to the top of the cell. We all knew what was coming, but we couldn’t believe he would do it. Shane stood on top of the cell, jumped off with an elbow smash and Undertaker moved. Shane went crashing 20 feet through that table. It was the craziest thing I’ve ever seen at a show I attended and I was there with 100,000 other people too. Some other matches may be better, but I think Shane’s incredible leap makes this one stand out. 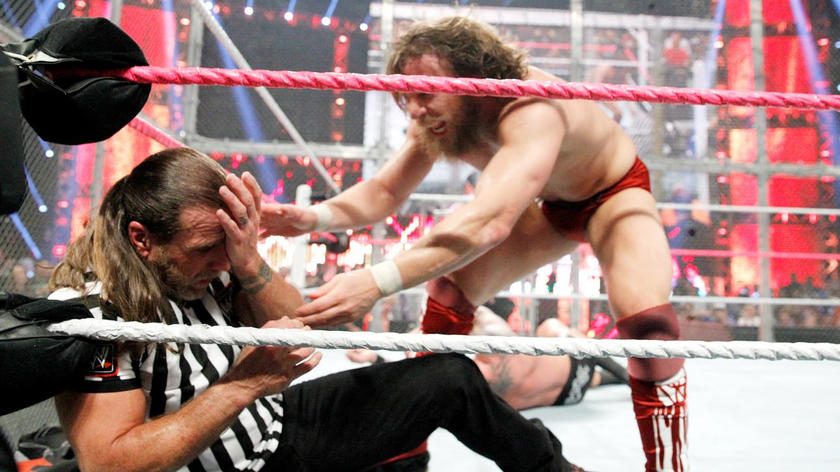 This was for the vacated WWE Title. The referee for this match was Shawn Michaels, who was a mentor and trainer of Bryan when he was starting out in the business. Michaels was also the best friend of Triple H, who was the heel leader of the company with Orton positioned as the top heel at the time.

There was a cheap finish to the match as Michaels was bumped during the match, so Triple H opened the cell along with the ringside doctor. Things deteriorated from there with Bryan hitting his running knee move on Orton and later on Triple H. Michaels saw that, was mad that Bryan would do that to Triple H and Michaels nailed the Sweet Chin Music superkick on Bryan. Orton covered for the win while poor Daniel Bryan was screwed again.

At the time, that finish was hated by fans who wanted Daniel Bryan to get his hands on the WWE Title for a long reign. When looking back on it now, it’s easy to see that it was a smart way to end the match and leave the fans wanting more. Cena was the WWE Champion at the time, but Del Rio is the one that left with the title. It was a very creative way to do a triple threat match inside the cell. It’s the only triple threat match in Hell in a Cell history, so it is unique in that regard. It tends to be a match that takes place between two people or sometimes a tag team.

The match was very competitive and well done, with all three guys looking like they might leave with the gold. They did a creative finish with Del Rio cheating to win, thanks to his personal ring announcer Ricardo Rodriguez playing a big factor. Rodriguez stole the keys for the lock on the cell and Cena took him out with the Attitude Adjustment, but Del Rio hit Cena with a lead pipe and locked the door to keep him out. Then Del Rio hit Punk with the lead pipe and that was enough to win. It was one of the most creative endings to a Hell in a Cell match.

Triple H and Jericho main-evented WrestleMania 18 earlier in 2002, but the feud didn’t end there. It led to a Hell in a Cell match with Triple H as the face and Jericho as the heel. I remember a spot in the match where referee Tim White was by the ring and then he was sent into the cell. He suffered a severe shoulder injury and couldn’t referee again after that. It was an accident which proved that even referees were in danger sometimes inside Hell in a Cell.

Here’s an example of an intense, well-worked match that people may hate just because there was a cheesy finish to it. I liked most of the Rollins/Ambrose matches in 2014 (the year Rollins turned on The Shield) and I felt like they deserved to be in the cell to settle the rivalry. They brought the intensity right away, which is how Hell in a Cell matches should be. Sometimes, they are slow and plodding, which doesn’t make sense if two guys “hate” each other so much.

The most memorable spot was when both guys were on the side of the cell, right above the announce tables and they took bumps off the cage through the announce tables below them. Fans today are desensitized to big bumps, but this was one of the bigger bumps you’re going to see because it was about 10 feet high. Rollins ended up winning because Bray Wyatt showed up, he slammed Ambrose and Rollins got the win. It was cheap, yet the work in the match was intense and well done.

When thinking about Triple H vs. Shawn Michaels from 2002 to 2004, it’s basically a template on how you should do a feud between former best friends. Triple H was the angry heel and Michaels was the lovable face. They had many great matches on Raw and PPV events, but this was their only Hell in a Cell match against each other.

It was the longest Hell in a Cell match ever with a match time of 47:26. It was a very slow and plodding match with a lot of blood, but what kept it from being an all-time great match is that it was too long. It’s still an awesome battle if you have nearly an hour to spare to watch it. There aren’t many one-fall matches in WWE history longer than this, so it does stand out in that regard. I thought Michaels should have won as the face, but Hunter was the younger heel that was in the title picture, so that’s why he got to win again. This match was the main event of last year’s Hell in a Cell event and it was a lot better than most of us thought it would be. Their WrestleMania 30 match was historic because Lesnar ended The Undertaker’s Streak, but it wasn’t a great match in part because Undertaker got a concussion. Undertaker got his win back in controversial fashion at SummerSlam 2015, so they decided to settle it inside Hell in a Cell.

The reason I was surprised by the match quality is that Undertaker was 50 years old and Lesnar wrestles a much more physical style than he did in the early 2000s. They did a lot of cool things in the match like when Undertaker hit the Tombstone, Lesnar kicked out and Undertaker had that awesome shocked expression on his face. Lesnar exposed part of the ring by ripping up the mat. It’s something we had never seen before, so I give them credit for doing a creative finish. Lesnar gave Undertaker a F5 on the exposed wood under the ring and that was the end of the match. It was a 20-minute fight between two guys that should have ended their rivalry inside Hell in a Cell and that’s what they did.

I didn’t intend to put the two Lesnar/Undertaker matches back-to-back. It just worked out that way. There’s a big difference between them because this match took place two months into Lesnar’s first WWE Title reign, when he was just 25 years old. Another big difference is that The Undertaker had a ridiculous amount of blood coming out of his forehead. It was nasty looking – one of the bloodiest matches I’ve ever seen.

This match is one of the best examples of using a veteran wrestler to put over a younger wrestler in a major way. They had a match the previous month that ended in a double disqualification, which necessitated Hell in a Cell. Undertaker was selling a “broken hand” during the match, yet he was still using it a lot. I thought he could have sold it better, but it’s not that big of deal. Lesnar took everything, kept kicking out and ultimately finished with a F5 to retain the WWE Title.

It was a match that proved Lesnar was the right choice to be a young WWE Champion the company can build around… until he left about 18 months later. At the time, it was the right move.

CLICK HERE FOR THE TOP HELL IN A CELL MATCHES >>>