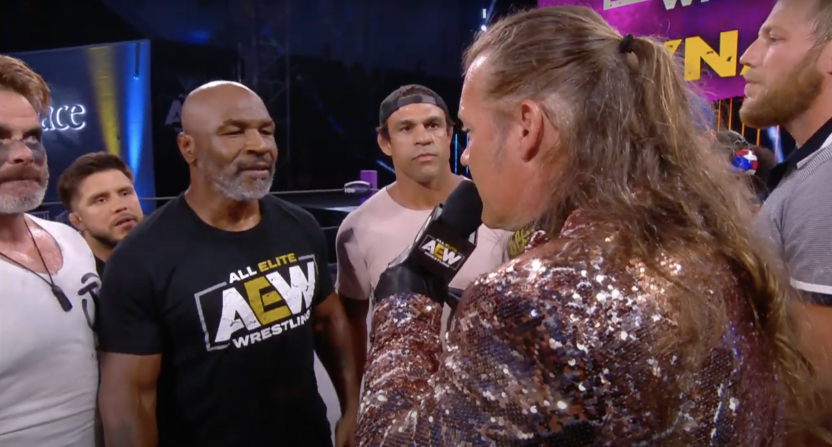 The end of Wednesday’s episode of AEW Dynamite exploded into chaos. Mike Tyson, who presented their TNT Championship at last Saturday’s Double or Nothing pay-per-view, showed up to crash the pep rally of former AEW World Champion Chris Jericho and the Inner Circle.

As surprising as this sounds, the brawl between Jericho and Tyson really felt like it was building up to a wrestling match between the two. Tyson had been working out and was interested in having a match but no one was thinking a scripted pro wrestling match.

Jericho discussed the Mike Tyson situation with ESPN’s Marc Raimondi and while it seems like nothing is set in stone, AEW is interested in doing something and the possibility of going up against Tyson sounds great for “Le Champion.”

“Obviously, the idea is to do something more. That’s the thought process, I think between both parties. What that is at this moment, we’re thinking and discussing. Look, Chris Jericho versus Mike Tyson in a wrestling match, in a street fight, in a boxing match, would be big. I’m not Mike Tyson. I’m not 1/1,000th of Mike Tyson, but I’ve been boxing for six years. I know how to box. I could win fights on my own against people of my skill level. So if that’s what he wants to do, that works too. Whatever he feels comfortable with, I can make it good. That’s what I do for a living. That’s what I’ve been doing for 30 years.”

“But to me it’s the buildup and the angle and all the things we can do. That’s what wrestling is all about — the storyline. The match is the cherry on top. But it’s the build that’s really the most entertaining part, and the part that gets people really involved. So whatever it is that we decide to do as we move forward, it’ll be great. You have one of the most iconic boxers — and most iconic personalities — of all time against one of the greatest pro wrestlers and personalities of all time. It writes itself.”

The story between Jericho and Tyson stemmed from a January 2010 episode of WWE Monday Night Raw. As guest host, Tyson was in a tag match with Jericho against Triple H and Shawn Michaels of D-Generation X. Tyson double-crossed Jericho and punched him giving the win to DX. Jericho has kept this feud going and now 10 years later, the story is continuing.

If there is a match, there are legit concerns with how this match will look. Jericho is famous for getting a great wrestling match out of anybody but Tyson is set to turn 54 in about a month and he hasn’t wrestled in a scripted competition. Jericho seems confident he could make it work with Tyson.

“There’s always a way to make it good. There’s bells and whistles. You just exemplify the strengths and eliminate the weaknesses. That’s the easy part. It’s just coming to some sort of a deal, or some sort of acceptance, of what we want to do if we’re going to move forward with this. The rest is easy. That’s my job. Once the deal is done or whatever we decide to do — if we decide to do more — that’s the easy part.”

Even with a lack of fans in attendance, AEW has seen an uptick in PPV buyrates and viewership over this past week. It’s tough to credit that all on Tyson but the curiosity factor of him on AEW had to have brought in some people, not to mention all the media publicity being focused on AEW. If Chris Jericho vs. Mike Tyson becomes a reality, and the story and match is somewhat passable, it should give the one-year-old organization some mainstream publicity that would go outside of pro wrestling circles.