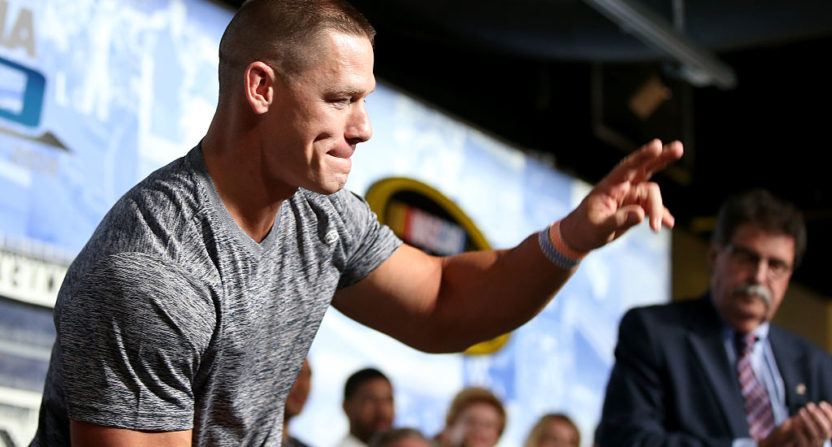 Ever since John Cena won his first WWE Championship in 2005, many WWE fans have wanted the 16-time World Champion to go bad and be a heel.

Cena does a lot for the kids and has the world record for fulfilling the most wishes with Make-A-Wish with over 500 (as of 2015). So out of the ring, it seems like Cena is a genuinely great guy. It’s just that his character is compared to Hulk Hogan’s character and that can be seen as good and bad. Both have been the most successful and popular wrestlers in their generation but both suffered from many being tired of the same thing of “taking your vitamins” and “hustle, loyalty, respect.”

While many still loved Hulkamania the same as many still love hearing “You can’t see me” today, Hogan’s character was revived and evolved when he turned heel, told the fans to screw off and joined the NWO. And many wanted Cena to do the same.

It turned out that Cena turning heel was supposed to happen on at least two other occasions and didn’t happen for different reasons. Former WWE writer Kevin Eck was on The Wade Keller Pro Wrestling Podcast and revealed the circumstances as to why WWE didn’t pull the trigger on the move either time.

“Vince had agreed to do it, but then he changed his mind and said that we can’t do it. This was back around the time when McMahon was really looking at Sheamus to get his push. The question was if we turn John Cena heel then who is he going to work with, who will be the top babyface?”

Sheamus got his first title run in December 2009 so that’s around the time WWE supposedly floated the “Cena as a heel” possibility. The second time Cena was prepared to go heel was squashed because of Kmart.

“That was the feeling back then, then we came up with some scenarios, and believe it or not, Cena was on board with it, but right around that time there was a big clothing line for John Cena at Kmart, and Vince McMahon was like, ‘Oh Jesus Christ, he has a deal with Kmart, and now we’re going to turn him heel?’ So, Kmart is to blame for Cena not turning heel. During a meeting once Vince had a huge smile on his face, and he tells everyone that I know you’ve wanted John Cena as a heel for a long time, but we just can’t turn him heel and that was the end of that.”

Cena’s clothing line debuted in 2013 so those discussions took place four years after the first discussions. Now that Cena is doing movies, fulfilling wishes for children and getting away from full-time competition, it seems like we won’t see a heel Cena. In the wrestling business, you never say never, but this may be the closest we’ll ever get to saying that in this industry.