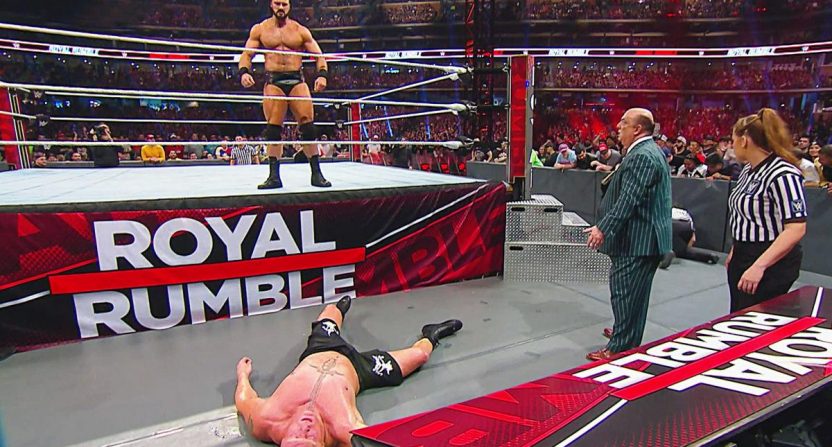 The Royal Rumble is one of the best events on the WWE calendar. A Pat Patterson creation, two people start and then someone enters every two minutes until all 30 people enter and the last person standing wins. It’s the right mix of excitement, nostalgia, and storyline development as the company begins its push to WrestleMania.

The Rumble will look differently this year due to COVID-19 but that doesn’t mean it’ll be any less exciting. One reason for that is nobody really has a clear indication of who’s going to win the men’s or the women’s matches. There are odds-on favorites but unlike in past years, with just two days until the show, both matches don’t have a lock for the winner.

Look at the women’s match for example. The women’s Royal Rumble match has taken place three times and in all three instances, it had been won by the person at the top of the division at that time (Asuka, Becky Lynch, and Charlotte Flair). Last year, fans were hopeful Shayna Baszler to pull off the win and give her a moment to cement herself into a star but in the back of our minds, we kinda figured it was Charlotte winning.

Many have looked at Bianca Belair as a potential winner in 2021. She is the odds-on favorite (+175 according to Bovada) and that’s a good idea given how she’s been booked recently. Belair’s been in a program against Bayley and while some of the concepts have been a bit goofy, the company is making Belair strong by having her do things like carry around a big guy like Otis on her back. Add in the fact that Belair has made no secret to the media this week that she wants to headline WrestleMania with Sasha Banks and have two Black women headline a title match at the biggest show.

Having said that, there’s a difference between Bianca Belair being the best candidate to win and actually having her win. There is an entire group of people who could win and make sense. Alexa Bliss has been unstoppable since she aligned with The Fiend. Charlotte Flair is always to be considered. Bayley may provide the swerve on those thinking Belair and set up a Bayley/Banks Mania match while getting heat on her for eliminating the favorite. Rhea Ripley had momentum last year and needs to get back there. A win in the Rumble could be big for her to breakout on the main roster. And while there hasn’t been any rumors indicating this will happen, there’s always the possibility Ronda Rousey comes back and becomes a surprise winner. The possibilities are endless.

That seems to be a similar case on the men’s side. The odds-on favorite for the men is Daniel Bryan (+125) and that makes sense because a Bryan/Reigns main event at WrestleMania will be awesome. That and it would be a nice form of closure from five or six years ago when people kept wanting Bryan and got nothing but Reigns.

That doesn’t mean Bryan is a lock either. There are fewer realistic possibilities than the women but there are a few. Edge announced this week that he’s back and is entering the Royal Rumble so there’s potential for an “injury comeback Rumble win” moment WWE has done in the past. With the sudden rise of Kofi Kingston two years ago to the WWE Championship, some feel the same can happen to Big E. Now a singles star, Big E is making a run but while Kingston got his momentum after the Rumble, Big E is doing it before. Big E could be a great challenger to Reigns and get a cornerstone win in the Royal Rumble.

Along with Big E, Keith Lee is in a similar situation. Even though he hasn’t officially entered the match, Lee’s the second favorite (+700) and is a popular star deserving of this moment. This would likely mean a title match against Drew McIntyre but they had that match a few weeks ago and despite the face/face matchup, it would be great to see at WrestleMania. Or, there’s a chance Goldberg beats McIntyre and then a Goldberg/Keith Lee WrestleMania match would work too.

It’s tough for a sport with predetermined winners to come up with something surprising that keeps people guessing. I guess if you’re constantly looking for news and rumors for what’s going to happen in pro wrestling, it’s your own fault if you find yourself not being surprised with what happens next. I admit I’m one of those people. But what’s happening Sunday is such a perfect storm for WWE that if they stick the landing, it may be a Royal Rumble we’ll remember for years to come.