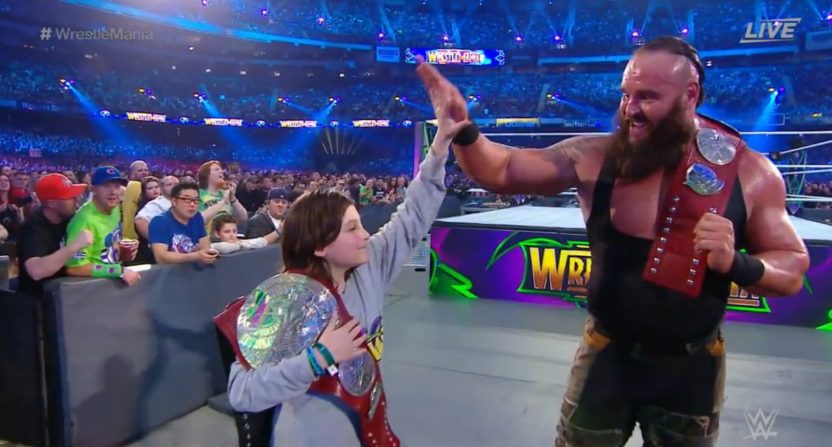 You knew that Wrestlemania 34 was going to be a night of surprises. Even so, the fact that a small child is walking out of New Orleans as a WWE Tag Team Champion has to be near the top of the list of all-timers.

The biggest professional wrestling event of the year was one full of twists, turns, and title changes. Cedric Alexander defeated Mustafa Ali to win the tournament for the vacant Cruiserweight Championship. Seth Rollins outlasted both Finn Balor and The Miz to win the Intercontinental Title. Jinder Mahal took his rightful (heel) place as U.S. Champion. The Bludgeon Brothers overcame both The Usos and New Day to win the Smackdown Tag Team Titles. Nia Jax defeated longtime Raw Women’s Champion Alexa Bliss to take the title for her own.

All of this is to say nothing of Charlotte shockingly ending Asuka’s streak, Bray Wyatt reappearing to assist Matt Hardy in winning the Andre the Giant Battle Royal, and Shinsuke Nakamura turning heel after losing to A.J. Styles.

Suffice to say by the time we got to Braun Strowman and his mystery partner taking on The Bar for the Raw Tag Team Championship, there wasn’t room left for anything else to surprise us.

That’s when Strowman decided to walk into the crowd of 78,133 fans in attendance to find his mandated partner for the match. While some fans held out hope that he’d “discover” someone like Dean Ambrose or Johnny Gargano (but certainly not Hulk Hogan), Strowman set his sights on Nicholas, a young boy who was certainly not pre-selected for reasons we’ll probably come to learn about soon enough.

WHERE ARE THIS PARENTS pic.twitter.com/2FaPtTvxrv

Despite all kinds of child labor law concerns, the match got underway and Nicholas even tagged in at one point. Face-to-face with Cesaro, who seemed more than happy to knock his head off, Nicholas wisely tagged Braun back in so that the actual WWE wrestler could take care of the business.

Braun Strowman and Nicholas a kid from the crowd are the NEW #RAW #TagTeamChampions what a moment #TagTeamTitles #WrestleMania #WrestleMania34 pic.twitter.com/1NrhllzDh0

Can sum-up my night in ONE WORD: #Nicholas.

While some might gripe that it’s unfair to give a title to a child when dozens of pro wrestlers out there have yet to actually win a title in the WWE (Asuka and Shinsuke Nakamura come to mind), it’s also possible to put that stuff aside and remember what the point of professional wrestling is. It’s supposed to entertain. And when it comes to the WWE, entertaining and inspiring kids is part of that equation.

Perhaps if we were talking about the Universal Title or something like that, we’d be having a different conversation, but it’s totally cool to have a stunt moment like this and create a memory that Nicholas will never forget.

Nicholas over Brock tomorrow on RAW. He’s our last hope

That is, of course, unless he turns heel on Raw Monday night and costs Braun the title(s). At that point, you’re on your own, Nicholas.

UPDATE: Soon after WrestleMania ended, Pro Wrestling Sheet reported that Nicholas is the son of WWE referee John Cone. Call it an inside job, but it takes something away from the moment, and many wrestling fans aren’t happy about that.