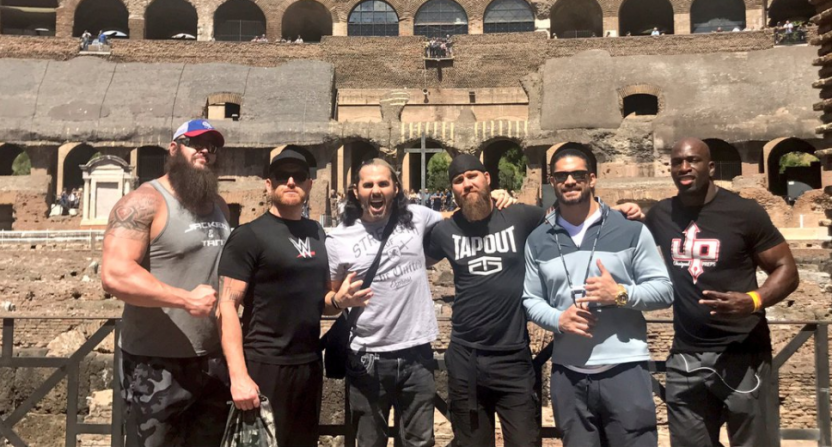 Max Landis isn’t everyone’s cup of tea. Hell, he’s not my cup of tea half the time. But if you’ve ever watched his short film Wrestling Isn’t Wrestling, there’s a part right at the beginning that serves as a solid (albeit outdated) rebuttal to keep in your back pocket anytime someone tries to tell you “wrestling is fake.”

“[Wrestling] is more real than any other TV show. WWE Raw features live, death-defying stunts performing in front of an audience of thousands every week. People who feel the need to tell you wrestling isn’t real certainly don’t watch wrestling, because the show features an undead wizard, leprechauns, an evil group of male cheerleaders. This show does not pretend to be an athletic competition. Instead, it’s a TV show about a wrestling show. It has more in common with Game of Thrones than it does with UFC.”

The reasons are obvious. Professional wrestling’s entire history is caked in the world of “kayfabe.” It’s a carnie term that implies what you see in the wrestling ring is reality and there is no difference between the character in the ring and the person portraying them. In kayfabe terms, the wrestling match is unscripted, the outcome is real, and that America-hating foreign guy is really an America-hating foreign guy.

Of course, none of that is actually true. The match was indeed scripted (to varying extents), the outcome was pre-planned, and that America-hating foreign guy probably grew up in Schenectady.

For decades, kayfabe was an essential ingredient to the world of professional wrestling. The notion that these larger-than-life competitors truly did hate one another and lived their lives according to the simple codes and mantras they offered to audiences made everything believable. It’s unrealistic to think many of the people watching pro wrestling didn’t know it was scripted, but the desire to enjoy it as if it was real was a major selling point.

It was also a time when it was relatively easy to maintain kayfabe. Pro wrestlers traveled from territory to territory, so it was rare for people to see them outside of the arena. If they did, wrestlers would often remain in character at the grocery store or pharmacy. Good guys and bad guys were dissuaded from appearing anywhere in public together.

As with so many things, the WWF/E’s ascension into the pop culture mainstream in the 80s and 90s helped squash the regionality of professional wrestling, also ending many of the long-standing aspects that originated in those carnie days. One aspect that held on for dear life was kayfabe. Even though wrestlers with clearly fake names and (probably fake) muscles were becoming household names, the unwritten rule continued to exist. This was in spite of the fact that pro wrestling had been “debunked” as “fake,” and Vince McMahon and the WWE went on trial and admitted to the world that everything was staged. Yet, the desire for kayfabe still lived on.

Whatever pretense we all had for maintaining kayfabe pretty much died with the advent of the internet and certainly died by the time social media took off. Back in the 30s and 40s, the chances you would ever interact with your favorite wrestler or know anything about them outside of the ring were slim. Now? Your favorite wrestler has a Twitter feed and Instagram feed, does interviews regularly, and appears in all forms of media, usually as themselves instead of the character they play in the arena.

If you missed James's interview with WWE's Bray Wyatt check it out here on his latest blog! http://t.co/3JKPuGVCcf pic.twitter.com/J7dKhVeHPA

If you can’t get yourself enough Bray Wyatt, as a fan you have to make certain concessions to the modern world. You can enjoy watching him appear out of nowhere or conjuring backwards-moving tractors and understand that his character has special powers that regular human beings do not (except for, you know, winning most of his feuds). However, you probably also follow him on social media and therefore know he’s actually Windham Rotunda, son of wrestling legend Mike “I.R.S.” Rotunda, and a father of two girls whom he recently took to DisneyWorld.

There is no denying either side of that equation anymore. And frankly, it’s silly to even try. Surely, you don’t watch Game of Thrones and wonder why Emilia Clarke doesn’t just ride dragons to all of her press junkets. Because, duh, she’s an actress playing a role in a show that you watch on television.

The same goes for professional wrestlers. They are playing characters on a TV show or in a live event that you attend. But their requirement to be that character outside of those confines is an unfair ask in the modern world. Some of them do, maintaining their Twitter account as an extension of their character. But others don’t. And that’s fine. It doesn’t detract from the quality of what happens on Raw or Smackdown or NXT one bit.

All of this came to a head recently when Braun Strowman (Adam Scherr) and Roman Reigns (Leati “Joe” Anoaʻi) were photographed together as part of a sightseeing tour at the Roman Coliseum.

The photo, tweeted by fellow wrestler Titus O’Neil, actually caused enough of a stir that he deleted it shortly thereafter.

The big kerfuffle? In WWE programming, Strowman and Reigns are currently locked in arguably the hottest feud in the company, one that revolves entirely around the notion of these two hosses beating the ever-loving hell out of one another anytime they’re within 500 feet of each other. Strowman is basically making his career around a series of Reigns beatdowns that include stretcher tosses and ambulance turnovers.

The notion that these two people might not, in fact, hate each other in real life, was too much for some WWE fans to bear. That notion was driven home by the photo’s quick deletion, signaling that there are many in the community, on both sides, not ready to truly admit that what happens in character is separate from what happens in real life.

@LAWradio there is a photo going around of Roman reigns and braun strowman together , I know kayfabe is dead , but this is ridiculous!?

Question of the day then, in a post-Kayfabe world – does that Roman Reigns & Braun Strowman's buddy vaycay snap really matter? #WWE

My only issue w/ this Braun / Roman pic, is that @TitusONeilWWE uploaded it w/ a clear head. Maybe he can claim he was 'hacked' again 🙂 pic.twitter.com/wMaieTdLp2

Frankly, if you can’t accept the idea that professional wrestlers, traveling performers by trade, are friends behind the scenes, then it might be time to reassess how you digest wrestling. To ask for that kind of reality in 2017 is simply unfair. Even if they all tried to stay in character 24/7/365, they’d still be caught out by photographers, tipsters, and TMZ. It’s too much to ask of pro wrestlers to put your satisfaction about the reality of a storyline over their own friends, family, and personal life. There was a time you could but that time, like kayfabe, is dead.

Besides, there are plenty of wrestlers out there happy to blur the line anyway. We still see real-world issues bleed into wrestling storylines all the time. All the while, those same wrestlers might make a PR appearance out of character or do an interview with a TV network that’s about their non-character life. And it all still works. Because it’s a show. It’s a performance done by performers. We’re all in on the bit and we’re okay with it. You don’t watch wrestling for the reality. You watch it for, well, there’s a million better reasons out there and everyone picks their own.

Whether you want it to be or not, pro wrestling is like any other pop culture now. You wouldn’t expect to see Chris Evans in his Captain America get-up if you saw him on the street (though it would be awesome). So don’t expect to see Braun Strowman and Roman Reigns to beat each other up in a restaurant you’re eating at as well (though it would be awesome).

If you do see Reigns and Strowman near an ambulance, however… RUN.