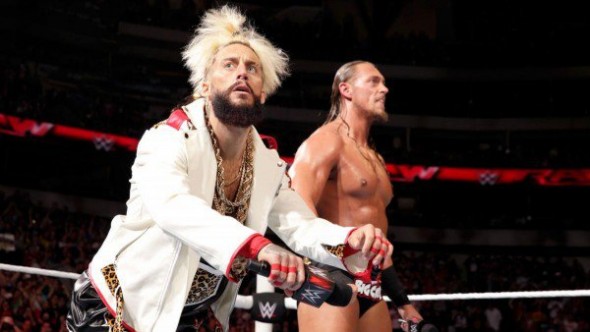 On the April 4 episode of Monday Night Raw, the tag team of Enzo Amore and Big Cass made their WWE debut. After building up a following in NXT, the duo’s cushy premiere slot was a sign that the company had big plans for the curious-looking pair. Billed at seven-feet tall, Big Cass towered over his diminutive partner. But what Amore lacked in size, he made up for with his “gift of gab.” A rare talent on the microphone, Amore had the crowd eating out of the palm of his hand from moment one. His “hey, how you doin'” Jersey bro character should have been annoying, but somehow he made himself likable.

Any WWE fans who didn’t already know his catchphrases by heart learned them pretty quickly. Within weeks, they were battling for the WWE Tag Team Championship and working main event matches alongside John Cena.

Interesting enough, the duo never actually won any titles. Not in NXT and not in the WWE. They were the rare tag team that rose to the top of the business without ever actually needing to put the straps on. It simply seemed like the right place, right time, and right people.

A little over a year into their run, the schtick started to get stale and Cass and Amore were broken up. During that feud, Cass injured himself, leaving Amore to finally become his own wrestler. Realizing that fans were starting to find his act annoying and overbearing, they wisely transitioned him into being a heel and made him the champion of the fledgling 205 Live brand for cruiserweights. There, Amore garnered heat just for being who he was: a so-so wrestler who kept beating “better” talents and talking smack about everyone while doing so. All the while he honed his character further, making sure you either really loved him or really hated him. Where you stood on the matter made no difference.

All the while, there were signs that the lines between the obnoxious character Enzo Amore and the actual person Eric Arndt were more blurred than people might realize. Those concerns were realized in full this week when Pro Wrestling Sheet reported that Amore was under investigation over claims that he raped a woman in an Arizona hotel room last year. That previously unnamed woman came forward on Twitter on Monday, sharing details about the alleged event as well as screencapped private conversations.

OKAY..it’s been long enough & I have been so so scared to share this. I was raped in mid October by the WWE Enzo Amore (also known as Eric Arden) & Tyler Grosso & TOOPOOR let it happen as accomplices. I was in a mental hospital for 45 days after it. They ARE NOT good people. pic.twitter.com/VhyG6oaDwg

ABC 15 confirmed that the alleged assault took place on October 19, 2017, and that police were already investigating. On Monday, WWE tweeted that they had suspended Amore. A day later, they announced that they had come to terms and released him.

WWE has come to terms on the release of Eric Arndt (Enzo Amore). https://t.co/iagk1311eD

The allegations are bad enough, but Amore likely made things even worse for himself but not actually informing WWE about the police investigation into the incident before this week.

I was told this morning that Enzo Amore was aware of the allegations and didn't clue WWE in.

While Amore is certainly not the victim here, it is worth noting what an epic fall his WWE career ends with. In the span of fewer than two years, he went from rockstar debut to main-eventer, to Cruiserweight champion to disgraced former wrestler.

Everyone will have to wait for the investigation to play out in order to find out the truth of what happened, but in the meantime the WWE will move forward without Amore (expect him to be extricated from all marketing materials ASAP) and now needs to figure out what to do about their Cruiserweight championship and 205 Live program. Amore is the second high-profile member of that show to be fired over claims of violence against women. So if they have any brains at all, they’ll vet their roster for the least problematic wrestler they have and hand the title to him.