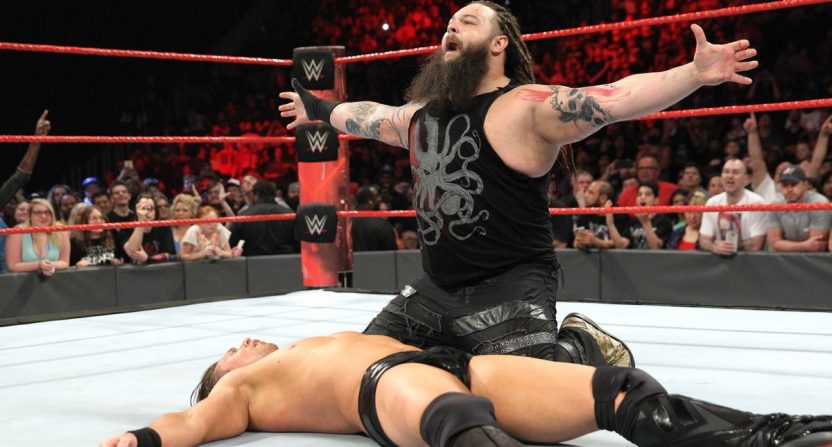 WWE Payback was actually, kind of a creative success. The proper storylines were advanced in ways that made sense, and the booking was generally seen as competent.

There was one exception and that was, of course, the Bray Wyatt/Randy Orton House of Horrors match. That one was, well, the wrong kind of horrible.

Moving on to the fight in the house, it was a bunch of weird stuff in a house with creepy music playing the entire time, so there was no commentary. There were also weird lighting effects. They fought in different parts of the house, Wyatt would get the advantage and when Orton fought back, Wyatt managed to get away.

Orton went into a creepy room with dolls laughing at one point as well, which led to another Wyatt attack. The fight led them to the kitchen area where Orton had the advantage briefly until Wyatt hit a low blow. Wyatt followed up by shoving a refrigerator onto Orton.

That doesn’t sound good! Compounding the problem was the build to the match. When WWE had their Superstar Shakeup on Raw, leading to various wrestlers moving between the dueling Raw and Smackdown brands, Orton and Wyatt were split up; that meant the build had to happen across programs. That meant a lot of Bray Wyatt popping in on the jumbotron to say “spooky” things to Randy.

The whole thing could charitably be described as a letdown. That’s apparent to those inside the company as well. WWE Hall of Famer Jerry “The King” Lawler answered a fan’s question about the match on his Dinner With The King podcast, Lawler mentioned that he wasn’t a fan of it either.

Lawler: “I was so looking forward to the House of Horrors match because I’m such a big horror movie fan. I’m such a fan of these kind of things.  I was really, really excited about this. The WWE, they have the opportunity and they have the people to put together some really great special effects. I guess my problem was I got my expectations up too high. I guess I expected more scary stuff. I’m not scared of baby dolls.”

Ignoring the somewhat obvious joke about how of course Jerry Lawler isn’t scared of children’s toys, he makes a solid point. The main problem with WWE trying gimmicks like these is that they’re not committed to the storytelling. A show like Lucha Underground can build entire worlds where things like a fight at a cult leader’s haunted house could make sense, but for WWE, at the end of the day, it just comes back to the ring in the middle of a well-lit arena, in public, where nothing bad can actually happen to anyone.

There’s no stakes, which undercuts any of the menacing or supernatural storylines they’re trying to tell, most of them revolving around Wyatt, a gifted performer languishing with a gimmick that just can’t work with the way WWE works. He’d be much more effective as a part-time presence, popping up for various arcs, but as it is, what does he want? To terrify people? Why would he care about winning wrestling matches then? WWE creative just doesn’t know what to do, and it shows.