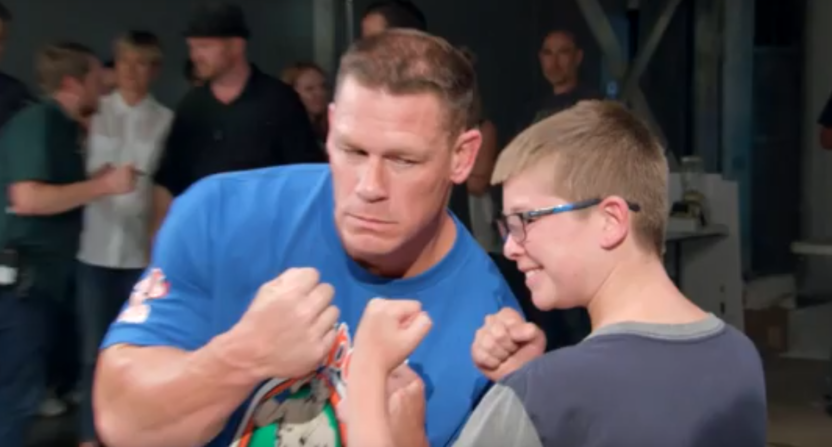 It’s time to kick ass and chew bubble gum, and John Cena’s all out of gum.

Cena already has a good number of movies under his belt as he continues to spread his wings beyond the rings of the WWE. One of his future roles may be dipping his toes in the treacherous waters of the video game movie adaptation.

According to The Hollywood Reporter, Cena is in negotiations to star in a Duke Nukem movie from Paramount. The movie would be produced by the same company run by Michael Bay, so expect plenty of CGI and explosions if the movie comes to fruition.

The idea of a Duke Nukem movie has been floating around for a while, but the rights lapsed by a previous production company. That left the franchise out for the taking for any willing studios. With the often poor results of a video game movie well-documented, and perhaps with the previous atrocious results of another first-person shooter being adapted for the big screen (Doom, starring The Rock), there was a reason why a Duke Nukem movie never came to be. But with a recent revitalization in the video game movie category, the timing may be right to give Duke Nukem another shot at Hollywood glory.

Cena would seem to be a good fit to take on the role of the popular gritty anti-hero who serves as the namesake of the franchise. Cena has the build you would expect for the character Duke Nukem, who battles aliens in an attempt to save the planet from invasion. Cena’s previous movie gigs have come under the Paramount flag as well, making this a likely combination of the movie coming together.

One can only hope Cena fares better in a Duke Nukem movie than Dwayne Johnson did in Doom. On the surface, it’s essentially the same exact plot and situation, although Cena is a bit more experienced on the big screen than Johnson was at the time Doom flopped in theaters. Although, Johnson has been given a chance to redeem himself in the video game adaptation category with this year’s upcoming release of Rampage.

If Cena and Paramount can pull off a Duke Nukem film, it opens the door immediately to a franchise of movies just as the game franchise has seen on PC over the years. And for long-time Duke Nukem fans, perhaps a movie will have to satisfy the craving for a long-awaited new game that has been on ice forever.