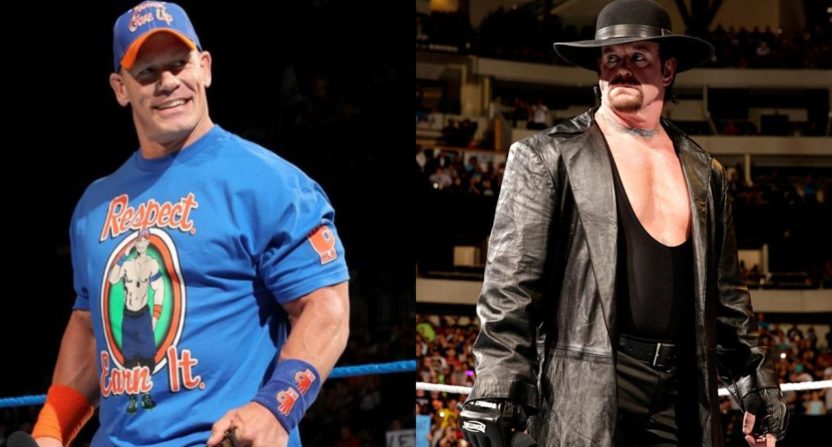 The month of January means it’s Royal Rumble season and it also means WWE fans tend to know which big matches we might see at WrestleMania, based on what happens at the Royal Rumble. The Royal Rumble is on January 28, but before that there’s a huge Raw show on January 22 from Brooklyn’s Barclays Center and the Manhattan Center in New York.

At that show, WWE has advertised some huge names for the event including “Stone Cold” Steve Austin, Degeneration X (Shawn Michaels & Triple H), The Dudley Boyz, The New Age Outlaws, The APA, and The Undertaker among others.

The one name out of that group that is most interesting is The Undertaker, because he’s going to be featured in a big match at WrestleMania on April 8. His likely opponent? John Cena.

A lot of people thought The Undertaker retired at WrestleMania last year, myself included. You may recall that I wrote an article last month about the best WWE moments of 2017 and I had The Undertaker’s WrestleMania “goodbye” in the top slot. The Undertaker will turn 53 years old in March, he’s had numerous surgeries including on his hip and knees in recent years. It doesn’t seem to hold him back because the lure of “one more match” against Cena, who Undertaker hasn’t wrestled in a big match since Cena became a top guy, is likely something Undertaker wants to do.

Plus, you know WWE is going to pay Undertaker a lot of money to do the match, so why turn down a big payday when all you have to do is train for months to work for 15 minutes? I don’t blame him for doing it.

Cena vs. The Undertaker is considered one of the main events of WrestleMania. The other likely main event is Universal Champion Brock Lesnar defending his title against Roman Reigns, who may win the Royal Rumble, but hopefully not. The Raw brand has the Elimination Chamber PPV in February, so Reigns may win that to get the shot at Lesnar.

I’m hoping that Shinsuke Nakamura wins the Royal Rumble to face AJ Styles for the WWE Championship at WrestleMania. No idea if that’s the plan, but that’s what a lot of people want. The Reigns vs. Lesnar match has been the plan since last March and there’s no indication that the plan has changed since Reigns has been kept away from Lesnar in the last year, aside from Lesnar pinning Reigns at SummerSlam in a 4-Way match.

Is it smart to do Cena vs. The Undertaker? That’s up for debate. I think it’s probably a few years too late since The Undertaker has lost at WrestleMania twice and some of the mystique is gone. Plus, Undertaker didn’t look that good in the ring against Roman Reigns last year. It seemed like the right time to walk away.

I posted a Twitter poll a few hours ago and you can see from the results that over 70% of the people that voted don’t seem that excited about it.

What do you think about WWE doing Cena vs. Undertaker at WrestleMania this year?

It’s another reminder that WWE isn’t about what the majority of us want. It’s about what Vince McMahon wants to do, so if Vince wants to put two of his favorite guys in Cena and Undertaker against eachother at a WrestleMania for the first time ever then that’s what he is going to do. As always, plans can change, but when it comes to these two men, Vince likely isn’t going to change his mind.

Cena vs. The Undertaker has been rumored to happen at WrestleMania every year for several years now. It is a dream match for a lot of people. Perhaps in 2018, we will finally see it.