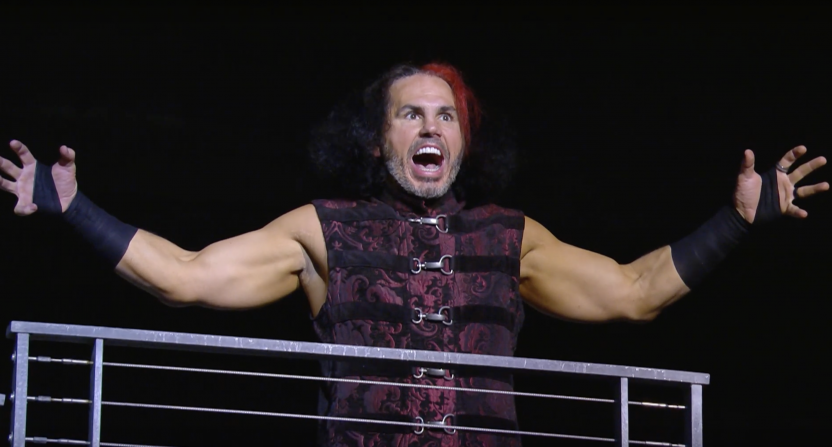 It’s tough to legitimately surprise pro wrestling fans these days. When a show ends at the top of the hour, fans are conditioned to believe that the main event match will end with a minute or two left so you can kind of see something coming. So when Santana rolled up Matt Jackson for the win on Dynamite, I was not expecting the finish to happen with more than five minutes left in the broadcast.

Fortunately, that wasn’t the only legit surprise as Matt Hardy appeared from the empty arena and announced his debut in All Elite Wrestling. Hardy signing with AEW wasn’t the surprise, almost everyone assumed that, but it was how AEW unveiled him and set up his debut that was the kind of perfect, next level storytelling that is needed in pro wrestling in 2020.

Let’s rewind to the formation of The Dark Order last May. The Dark Order was something fans didn’t really like and I must admit was a swing and a miss at first. But to AEW’s credit, they slowly tweaked the concept and once they started releasing cult-like recruitment videos about joining The Dark Order, the tide was turning on the storyline and fans were warming up to them.

Then came the reveal that there was someone called “The Exalted One,” who was the unknown leader of the group. Over the past few months, speculation floated as to who could take that spot. After it wasn’t Christopher Daniels, which would’ve been great for various “Higher Power” related reasons, attention turned to Matt Hardy.

Even though Hardy was still under contract with WWE at the start of speculation, many people including me were aware his contract ended in March and there was a realistic chance he would leave for AEW. I personally felt that AEW and specifically The Exalted One character was a role Hardy could sink his creative teeth into.

Hardy has always been one of the most creative people in pro wrestling and he’s showed that many times, the latest being his Free the Delete YouTube series that began last October before there was any talk of The Exalted One. Immediately after his WWE contract ended, Hardy brought in The Young Bucks to Free the Delete and clues about The Exalted One ramped up. Other than the occasional reference, most clues didn’t specifically name Hardy but in my mind, it had to be him.

That leads to the March 18 episode of Dynamite. It was promoted that The Exalted One would be revealed and many figured it would be Hardy since it theoretically made the most sense. Instead, halfway in the show, it was revealed that Brodie Lee (aka Luke Harper) was The Exalted One. Another former WWE wrestler who wasn’t being utilized all that much, Lee was also expected to make a move and AEW was a realistic possibility. While many expected Hardy in this role, we got Lee and while it wasn’t what I expected, the reveal was still awesome and this character will give Lee the opportunity to be a leader with a voice that wasn’t seen in his eight years with WWE.

Right after Lee was revealed as The Exalted One, Hardy uploaded his final episode of Free the Delete that ended on a bit of a cliffhanger with Vanguard 1 taking him to “Arcadia.” It’s at this point where I figured Hardy would be in AEW but the reveal would take place another night. AEW already announced a new person so surely they’ll save Hardy for another episode.

AEW went against conventional logic and provided another welcome surprise. When Vanguard 1 lowered itself to the ring, the puzzle suddenly became complete. Matt Hardy wasn’t The Exalted One, he’s instead going to help The Elite against The Inner Circle.

For better or worse, writing a pro wrestling show is tougher now than it was 20 years ago and back then it was tougher than it was 20 years before that. There was a time when people thought pro wrestling wasn’t scripted and was totally unaware about the business. A wrestler could move from territory to territory, do the same thing, and fans would be none the wiser since it was all regional. In the Attitude Era and the beginning of the Internet, people knew pro wrestling was scripted but many fans were still in the dark for a lot of the behind the scenes “dirt.” While some info leaked out and a few people were aware that a new wrestler had signed with WWE or WCW, most people remained surprised when they appeared on TV for the first time.

What AEW is doing is adapting to the modern pro wrestling fan and are finding ways to entertain the “smart marks” while not trying to overwhelm the casual fans who just want to be entertained. AEW is well aware many are reading Dave Meltzer and are in the loop when wrestlers’ contracts end at a certain time and know the cause and effect that when one thing happens, this will be the result. But because AEW has leaned into this realm of assuming the fan has been smartened up on the business, they’re flipping the script and surprising fans by playing on their preconceived expectations.

For example, a few weeks ago, Chris Jericho’s band Fozzy announced a spring tour before AEW Revolution leading many to believe Jon Moxley would win the AEW World Championship so Jericho could go on tour. Even though it was predictable, Moxley won the title because it was the appropriate thing to do in the storyline; Fozzy’s tour became more of a coincidence. But on the next episode of Dynamite, Jericho self-imposed a 60 day suspension if Moxley didn’t leave the arena on a stretcher that night. To someone like me, I figured that would be how Jericho would be written off the show so he could go on tour. Instead, The Inner Circle powerbombed Moxley off the stage and did what they said they would do, keeping Jericho from going into exile.

That kind of swerve is what AEW did with Matt Hardy and caused a legit surprise to someone like me who thinks (but not really) that they have seen it all in pro wrestling. Make it somewhat but not completely obvious that Hardy would be The Exalted One. And when speculation was at a fever pitch, they swerved for Brodie Lee. Then when it would be unlikely that AEW would reveal two new big name talents on the same night, Matt Hardy showed up for an additional twist. That is how you keep things fresh and interesting in pro wrestling.

I must admit, when AEW started, I was skeptical. I watched WWE but never could get into the independent scene so I had no clue who most of these wrestlers were at first. And the few people who I was aware of (Kenny Omega, The Young Bucks) I never saw them compete before. But after attending the first Dynamite show in October and Full Gear in November, I grew to enjoy AEW and it’s been a conduit for me to expand my wrestling fandom and watch other promotions. While people like Cody, Dustin Rhodes, Chris Jericho, and Jon Moxley drew me into AEW, I now love AEW because of people like MJF, Sammy Guevara, Adam Page, and Orange Cassidy (among so many other talented stars who are getting their first chance on the big stage).

Pro wrestling storytelling may be more difficult to do in 2020 but it’s not impossible. We’re nearing six months since AEW’s first Dynamite show and while AEW has some things they need to work on, the “newness” has largely worn off and they are still making great TV every week. And as they enter arguably their biggest test as a company, having empty arena shows for the foreseeable future, AEW seems to not be skipping a beat. It’s reveals like Brodie Lee being The Exalted One and Matt Hardy showing up that show how compelling long-term storytelling can be when it’s written with the mindset that the average fan is more educated about the business than ever before. That’s what pro wrestling needs in 2020.