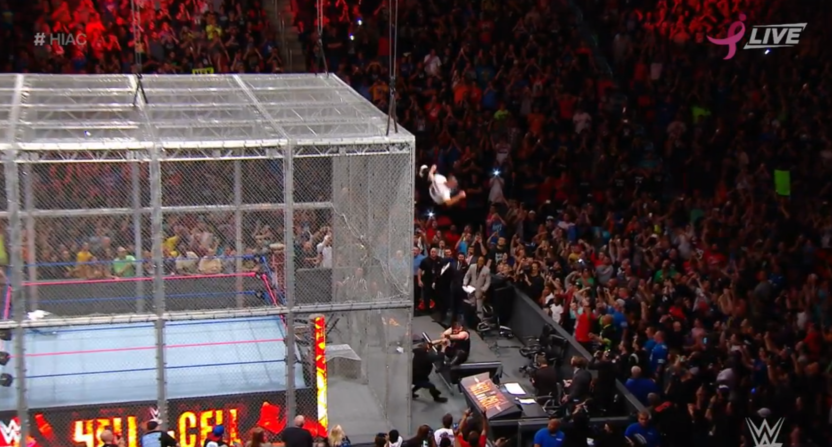 Sunday night at “Hell in a Cell,” Shane McMahon and Kevin Owens put on a classic that could arguably be compared to some of the great Hell in a Cell matches from years ago.

Their nearly 40-minute match had just about everything, including Owens falling from about 15 feet into the Spanish announce table. And then Shane McMahon, as he does, one ups him and does something completely insane. McMahon recreated his WrestleMania 32 move by jumping from the 20 foot high cell onto the English announce table onto a prone Owens. Like The Undertaker, Owens was able to move out of the way but unlike Taker, Sami Zayn pulled him out of the way. And then Owens got the pin and the win in the “falls count anywhere” stipulation.

The result of McMahon jumping off the top of the cell may have caused some serious medical problems for McMahon. WWE.com reports that a preliminary report on the 47-year-old at the hospital revealed legit “multiple injuries, including neck trauma, fractured ribs and a dislocated shoulder.”

Everyone knew Shane McMahon was going to do something insane during that match that not too many other people in WWE or in the world would think about doing. But the biggest form of psychological warfare inflicted was when McMahon and Owens spent about 10 minutes on the top of the cell and fearing every move would cause the cage to accidentally break and send one or both of them falling onto the hard ring, or worse, into the ropes or turnbuckles or the concrete floor.

The most notable version of a cage accidentally breaking was when Mankind was chokeslammed on top of the cage and unexpectedly fell through. The result was broken teeth that went through his lip and up his nose from a falling chair and Mick Foley being legit knocked unconscious.

Ever since that match, it has always weighed on the minds of fans when competitors are on top of the cell. Sure, after Mankind-Undertaker, WWE strengthened the cage to withstand thousands of pounds of force so it bends but doesn’t break. But we saw what happened when the cell breaks and it can mess someone up.

McMahon and Owens fighting on top of the cell all that time was probably the most scared I ever was in watching a wrestling match and I have been watching for over 20 years. Sure, many have taken more frightening moves in years past, but if you look at the Mankind-Undertaker match, Mankind being thrown off the top of the cell happened so fast that you couldn’t process it long enough. And the cell wasn’t supposed to break on the second fall so again, that was also too quick.

McMahon and Owens spent 10 minutes just psychologically mindfucking everyone on top of the cage to the point where the fans got rather quiet at points. Not because they were disinterested, but because they didn’t want to see anyone die. Just look at this and just think that at any moment, that cage could break.

And I’m hoping Shane McMahon and WWE consider that in kind of dialing back the insane stunts like jumping off the top of the cell. Sure, in the Attitude Era, something like that would be common and there’s a part of me that wishes some things from that time were in pro wrestling today. But we know so much more about CTE and wrestlers being in some bad shape after retiring and/or dying prematurely that while they literally sacrifice their bodies for the fans, there becomes a limit.

I mean, Shane McMahon has kids, Kevin Owens has kids. Mick Foley had kids when he was getting thrown off the cell. I didn’t think of it and process it at the time because I was 11 and we knew next to nothing about a wrestlers real life, but there is a such thing as too much and maybe Shane McMahon and Kevin Owens hit that last night in their match.