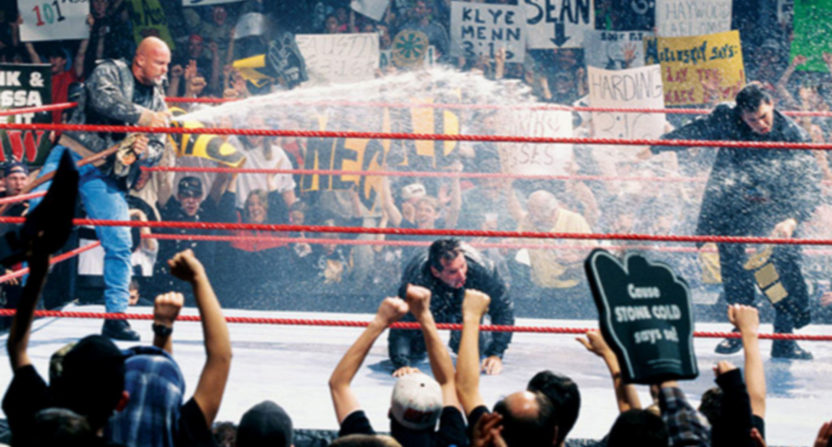 The storyline that dominated 2001 was WCW and ECW (led by Shane McMahon and Stephanie McMahon), aka The Alliance, trying to take over the WWF owned by Vince McMahon. It looked like The Alliance was going to destroy the WWF again on the last Raw before the Invasion PPV. On the July 16, 2001 episode, Vince pleaded with Steve Austin for the “old” Stone Cold to return. By that, he meant the Austin who would kick anybody’s ass.

Austin was a heel at the time, but the fans still loved him. When Austin showed up in the parking lot, fans went wild for him. He made his way down to the ring and Austin received one of the loudest ovations in the history of his incredible career. I’ll never forget that pop, which is why it must be one of the most memorable moments ever. Watch the segment again. Listen to those reactions. Nobody can ever touch Austin in terms of how much the crowd loved him.

Six days later at the Invasion PPV, Austin turned heel again by costing the WWF the match against The Alliance, but that doesn’t mean we should ignore this moment.

The great thing about DX invading WCW, at least in theory, was that WWE had the guts to even do something like that. Raw was in Hampton, Virginia that night and Nitro was in Norfolk, so WWE decided to take advantage of it by having the DX group of Triple H, Billy Gunn, Road Dogg, X-Pac and Chyna head to Nitro to try to cause a distraction while rallying the fans there to support WWE instead of Nitro. It featured a tank and a bullhorn with Triple H talking about starting a war with WCW.

There was a memorable shot of the DX guys on the tank trying to get through some door, but the door closed as they got closer. What would have happened if they got through? Maybe some sort of altercation with some WCW talent. There are a lot of different stories from both sides when it comes to that. Then again, Road Dogg had brothers who worked there, so he probably would have enjoyed seeing them.

I think any WWE fan who saw that really believed in the company’s ability to do anything to entertain us.

16. Vince McMahon gets attacked in the hospital

This was a classic comedy segment. Vince was in the hospital after getting beat up by The Undertaker and Kane, so Mankind paid a visit. Vince was grumpy because he was hurt and in no mood for it, so Foley brought Yurple the Clown with him. That made Vince even more angry. Foley even had a sock puppet for Vince that he called Mr. Socko, which Vince hated even more.

Later in the hospital, Vince told a nurse he can’t wait to get out of there and she mentioned the doctor. It was Steve Austin dressed like a doctor and he destroyed Vince in the hospital room. Austin nailed Vince with a bedpan leading to the “Bedpan McMahon” name of this segment. It became another classic moment with Austin beating up Vince.

15. Seth Rollins turns on The Shield

The Shield trio of Roman Reigns, Dean Ambrose and Seth Rollins dominated WWE from the moment they debuted at Survivor Series 2012. They won titles, had great matches against everybody and slowly won over the crowd too. It looked like they would be together for a long time until they were standing in the ring on Raw and Rollins decided to nail Reigns in the back with a steel chair. I loved Ambrose’s reaction to it with his shocked face and then Rollins beat him up too. Rollins became a top heel while the other two sought revenge against him.

Looking back, the group was only together for about 18 months and probably should have had a longer original run. The problem is that CM Punk quit the company earlier in the year while Daniel Bryan was hurt, so WWE needed singles wrestlers. By having Rollins turn the way he did, it set things up well for the future.

It was the Raw before WrestleMania 17, with evil heel boss Vince McMahon in the ring bragging about how he bought WCW. That was a legitimate story which made headlines earlier in the day, but to WWE’s credit, they made it a lot more interesting on Raw.

Shane McMahon, who was set to face Vince in a huge match at WM17, appeared in the ring on Nitro in Panama City, Florida while Vince was in Cleveland. It was the last Nitro in WCW history. Shane informed us that there was a McMahon name on the contract to buy WCW, but the name was Shane McMahon. Vince was furious about it and they set off the storyline where Shane would compete against his father. One of my favorite parts was Vince’s “gulp” face when Shane told him the news. That was classic Vince.

13. Chris Jericho wins the WWE Title… and has it taken away

Triple H was the heel WWE Champion who dominated the shows along with his storyline wife Stephanie McMahon. Chris Jericho ended up convincing Triple H to give him a title match and Jericho was a young face at the time who the fans loved. The main referee of the match was Mike Chioda, who took a bump. Earl Hebner was the replacement, even though he was on probation. Triple H shoved Hebner on his ass. Jericho capitalized with a spinning heel kick and a Lionsault for the pinfall because Hebner did a fast count.

Jim Ross’s call: “Jericho! Jericho! Jericho has just beat The Game for the WWF Title!”  The crowd was going crazy for it as Jericho left with the title.

Shortly after, the decision was reversed because Triple H made Hebner do it due to the fast count. Triple H was given the WWE Championship back, so Jericho’s title win officially didn’t count. It was still an awesome moment.

This was from Raw’s first year. Ramon was one of the top heels in the company, while 1-2-3 Kid was just known as “The Kid” for this match, but he got the 1-2-3 Kid name after this match. That’s because The Kid hit a moonsault press on Ramon leading to a cover and a three-count where Ramon kicked out right after the ref’s hand hit for the third time. It was so close, but it was a win for The Kid.

I think it’s fair to say this is the best upset in WWE history. It was brilliantly done. What this moment proved is that anybody could beat anybody at any time, so it made people want to pay closer attention when a perceived loser was in there with a top guy. It was 25 years ago and I’ll never forget it.

A lot of WWE fans were legitimately mad that Daniel Bryan wasn’t in the 2014 Royal Rumble. Not only should Bryan have been in the match, he should have won the damn thing. Bryan was screwed out of the WWE Championship multiple times, so the easy story should have been that he won the Royal Rumble to get another title match and then he beats Randy Orton to become the WWE Champion. Easy, right? Nope. WWE had other plans.

On the March 10, 2014 edition of Raw, WWE came to their senses by booking Bryan in a memorable segment where he and the fans occupied Raw. Bryan wanted a match with Triple H at WrestleMania, so Triple H said yes. Bryan also wanted a WWE Title match if he beat Triple H, so Triple H agreed to that as long as Bryan left the ring.

It’s pretty crazy looking back on it to see how WWE couldn’t get it right at the Royal Rumble. But thankfully, they came to their senses with Occupy Raw.